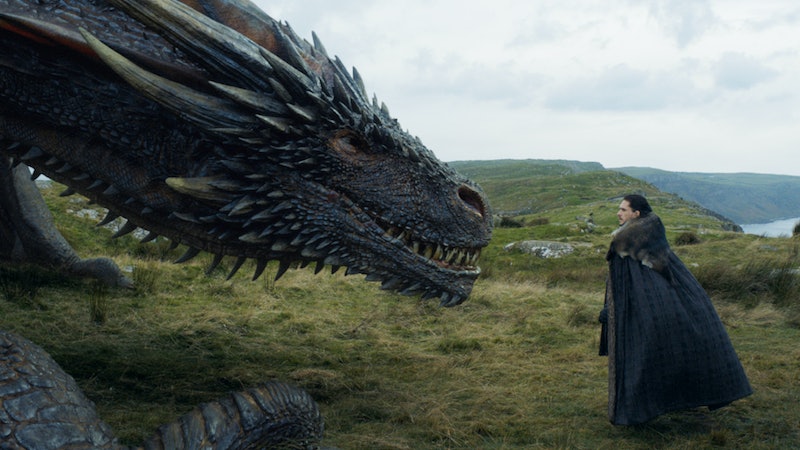 If you thought the Game Of Thrones scene where Jon Snow met Drogon for the first time looked familiar, don't worry, you're not the only one. Twitter seems to think Jon Snow's introduction to Drogon was a lot like a scene from Shrek. It sounds silly, but it's not hard to make that comparison once you see the two scenes side-by-side.

The Shrek scene that Twitter believes GOT ripped off is actually not just one scene, but a composite of a few times where Shrek's loyal steed Donkey meets Dragon face-to-face. She always spares Donkey, even if he initially looks afraid of what she's going to do to him. She eventually falls in love with him, and vice versa, and together they make beautiful dragon-donkey babies... somehow.

Just like Donkey, Jon Snow is concerned that this dragon is about to burn him alive, but instead the two just get a little up close and personal. Drogon, like Shrek's Dragon bats those does eyes of his and gets real close to Jon Snow. Like uncomfortably close, so that he can look into the new King of the North's eyes. Honestly, Jon seems to have the same facial expression as Donkey to his first dragon meeting, there's so much fear in those eyes. But there's also a sense that there's a connection here that Jon Snow can't quite put his finger on just yet.

This connection Drogon has with Jon Snow has some wondering if Daenerys' dragon is aware of who Jon really is. Maybe somehow this dragon knows that the believed bastard son of Ned Stark is really a Targaryen. One clue is that Drogon starts by showing his teeth only to back down once Jon Snow warily goes to pet him. This is a pretty big deal, since Drogon is not the friendliest of dragons to anyone who isn't his Khaleesi.

Whatever the truth is, Twitter is having lot of fun LOLing at GOT's Shrek similarities. "Drogon legit became Dragon from Shrek in front of Jon Snow," @Rujooz wrote. Another Twitter user with the handle @ThePixelFactor, who created the original comparison gif, wrote, "Confirmed. Jon Snow's real father is Donkey from Shrek." And another user dropped the biggest bombshell: "Shrek was the original game of thrones don't @ me."

And this isn't the first time Game Of Thrones fans have compared the HBO show to Shrek. For years now, people have pointed out that Nikolaj Coster-Waldau, who plays Jaime Lannister, looks a whole lot like Prince Charming from Shrek 2. With that blond hair parted right down the middle and that strong jawline, it's easy to see why people are making that comparison. "Am I watching Game Of Thrones or Shrek?!" one fan asked on Twitter. Honestly, I don't know anymore.

What I do know is that we should all be keeping our eyes peeled for Shrek Easter eggs in Game Of Thrones. Apparently, they're everywhere.