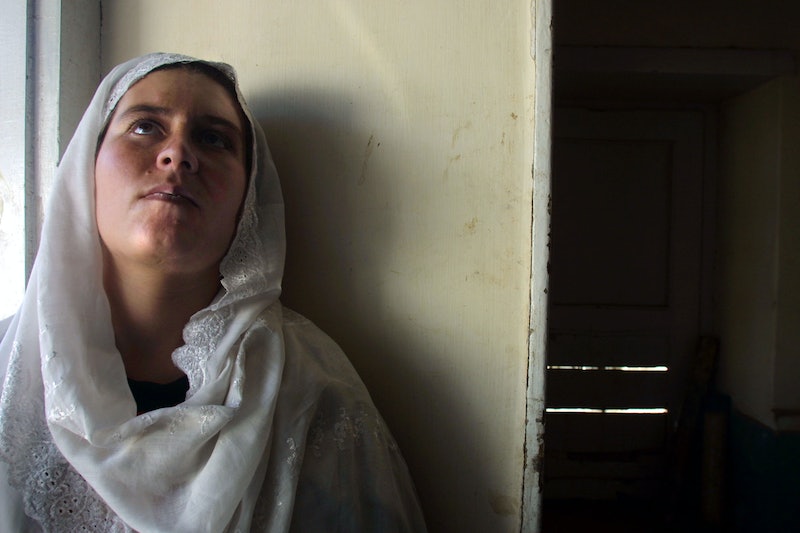 Anyone who has lived with depression knows that the mental illness impacts every aspect of your life — appetite, relationships, energy levels, and even the way you communicate. A new study has quantified how much depression can change your communication, and even potentially determine if you're depressed by analyzing how you use language. Basically, the study found that people with depression and anxiety speak differently than people who don’t have mental health issues, and it could change not just how we diagnose it, but how we understand it entirely.

“So far, personal essays and diary entries by depressed people have been useful, as has the work of well-known artists such as [Kurt] Cobain and [Sylvia] Plath,” Mohammed Al-Mosaiwi, one of the authors of the study wrote in a study brief. “For the spoken word, snippets of natural language of people with depression have also provided insight. Taken together, the findings from such research reveal clear and consistent differences in language between those with and without symptoms of depression.”

The study, which was published in Clinical Psychological Science, analyzed the texts from over 63 internet forums (comprising more than 6,400 members) and found that certain words or turns of phrase can accurately predict if someone is living with depression. Researchers used Linguistic Inquiry and Word Count software to screen for "absolutist" words, which are words (or phrases or ideas) that don’t allow nuanced consideration of a circumstance or event. People who use absolutist language tend to disregard context and express themselves using words that “denote totality,” according to the study, which is to say, think in absolute, rather than relative, terms.

Negative emotion words (like “sad” or “depressed”) were also analyzed in this study, but how they factored into the "language of depression" was different than expected. According to this study, people experiencing suicidal ideation used fewer negative emotion words than people who were anxious or depressed. This finding debunks the belief that people experiencing suicidal ideation have more negative emotions than folks who are anxious and/or depressed but not having thoughts about suicide.

But the way the users used pronouns was even more reliable in identifying depression than the use of negative emotion words. According to the study, people who were depressed used more first-person singular pronouns (“me”, “myself,” and “I”) and fewer second and third-person pronouns like “you,” “them,” or “she.” Pronouns are described as functional language in this study, meaning that they determine the style of writing, but not the content. And because pronouns play a functional role in language, the way they're used stylistically is often subconscious, meaning they can reveal implicit beliefs. “This pattern of pronoun use suggests people with depression are more focused on themselves, and less connected with others,” Al-Mosaiwi said.

More research needs to be done for other mental health issues, including perfectionism, self-esteem problems, and social anxiety. And researchers are looking to combine text analysis with machine learning (computers that can learn from experience without being programmed) to better classify mental health disorders. Of course, it’s important to note that people can use words and express ideas associated with suicidal ideation, anxiety, or depression without suffering from a mental illness. While text analysis is a useful tool, mental illness is determined by how someone feels over time, and not just by how they use language.

The World Health Organization estimates that more than 300 million people worldwide are now living with depression. That’s 18 percent more than 2005. And we're still making new discoveries every day about depression and other mental illnesses that can help us understand it even better in the years to come.

More like this
This Psychological Effect Might Be Keeping You From Hitting Your Goals
By Lexi Inks
19 Latinx Therapists & Mental Health Experts To Follow On Instagram
By Kaitlyn Wylde, Naydeline Mejia and Lexi Inks
The Spiritual Meaning Of Angel Number 000, Explained
By Kristine Fellizar
The 9 Best Exercises For Piriformis Syndrome Relief
By Carolyn Steber
Get Even More From Bustle — Sign Up For The Newsletter