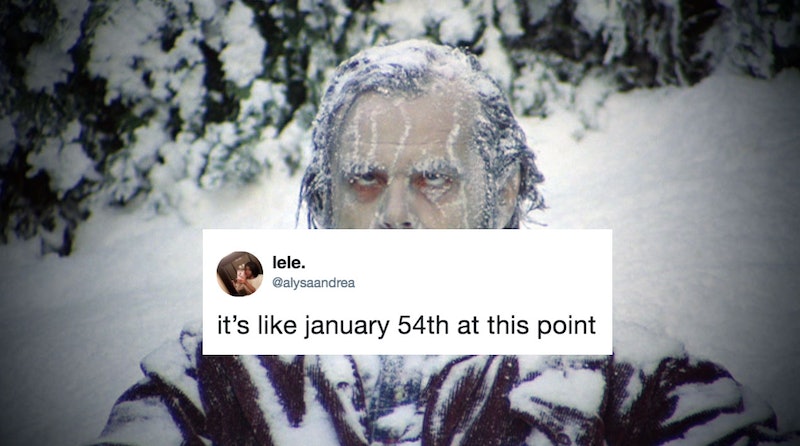 If you were to make a list of your favorite months, I bet January would fall near the bottom. In fact, if you Google "Why is January the", the second search option you are presented with is "worst month?" The truth is January is kind of a bummer. Aside from the literal first day of the month, there are no holidays to look forward to, and many people experience a dampened mood that has been coined "The Post-Holiday Blues." Plus, you're likely a little bit broke from excess spending during the past few months, and stressing about making rent can be pretty discouraging.

Another factor is what it feels like outside. In much of the continental US, the weather can be pretty crummy (not looking at you Florida or SoCal.) Earlier this month, we on the East Coast were even hit by a rare bomb cyclone that brought heavy snow and violent winds. It is beginning to feel like January might never end.

One upside to this is the modern and hilarious way people deal with being distraught: taking to Twitter. Here are a few highlights from the many recent tweets about the seemingly endless first month of 2018.

We have to be out of the twenties now, January 38th feels much more fitting.

Can you imagine a year of 365 days of ONLY January? Talk about gloomy.

Two Periods In One Month

Having TWO times of the month should be illegal.

Does the calendar not understand some people only get paid once a month or...

Feeling the Rain On Your Skin

*Natasha Beddingfield voice* Reeeeaching for [February] in the distance / So close you can almost taste it / Release your inhibitionsssss.

You heard the woman: ENOUGH ALREADY!

It Isn't Having It

All Kinds of Ugly

Just like a worm: mad ugly, white, and long.

When you wanna watch The Grammy's on Sunday night but you have to begin your fifth work week of the month the next morning.

The Year of January

On second thought, we have got to be in the fifties at this point.

Many people use the start of the new year to mark a change in unhealthy behaviors. Dry January is a public health initiative in the United Kingdom that aims to reduce the population's drinking habits and attitudes, and has leaked out into other countries as well. But giving up drinking altogether is no easy feat, and it is proving particularly challenging during a seemingly endless January.

It's the Final Countdown

Only two more days, now! You got this!

Who cares about the benefits if you're just going to be more cold and miserable?!

And finally, this girl:

A most nontraditional, but valid predicament.

Something to keep in mind, though, is that there might be a very valid psychological reason if you have been feeling particularly down in the dumps this month. Seasonal Affective Disorder, aptly nicknamed SAD, is a form of depression that occurs during the same season each year; and may occur most frequently in the winter. This is due to a widespread lack of sunlight that could throw off one's circadian rhythms, or even disrupt the production of serotonin (a chemical that affects mood) in one's brain. So, if you feel like the conclusion of January is taking its sweet time, and a silly tweet isn't helping to lighten the burden, perhaps it is time to talk to your doctor about other ways to deal with the bleakness of an unusually bleak January. In the meantime, we can all look forward to the fact that February is very much on its way — however slowly it seems.