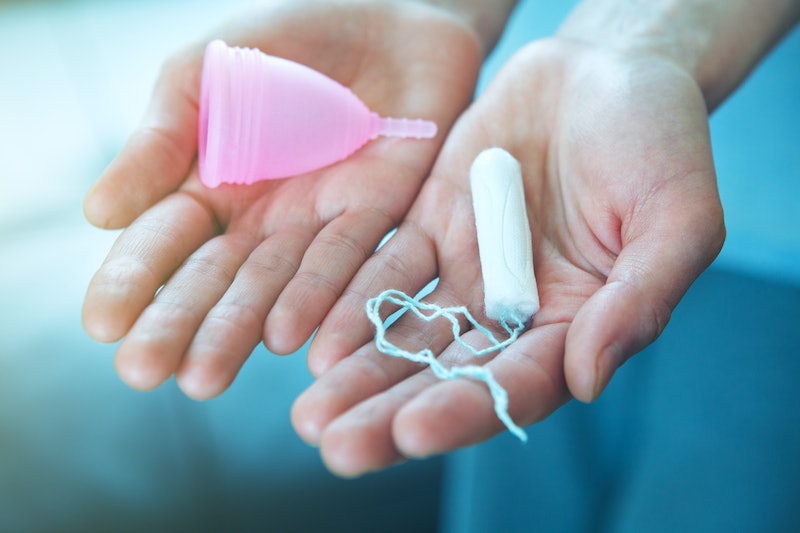 You may not give much thought to your period. Maybe it's an annoyance that occasionally ruins your jeans, or gives you cramps, headaches, or bloating. But for millions of people worldwide, period poverty, or the inability to access menstrual products like tampons or pads, is a persistent and debilitating problem. But unfortunately, it's not well-understood.

A new survey from the period tracker app Flo, using data from over 200,000 users in 219 countries, has found that 34% of its users believe that period poverty is only a problem in developing countries. In reality, experts tell Bustle, people in high-income countr ies like the U.S. experience period poverty too — and the fight to achieve menstrual equity, in which all menstruating people have access to the supplies they need, is still ongoing.

"In the U.S., and in other Western nations, there’s a notion that [period poverty] couldn’t possibly be the reality here," Jennifer Weiss-Wolf, co-founder of Period Equity, an organization that fights for menstrual equity in the U.S., and author of Periods Gone Public: Taking A Stand For Menstrual Equity, tells Bustle. But that couldn't be further from the case: According to data from the International Federation Of Gynecology and Obstetrics, 500 million people experience period poverty around the world. In the U.S., a few studies show that it's a widespread and deeply worrying problem. One published in Obstetrics & Gynecology in 2019 found two-thirds of respondents, low-income women in St. Louis, MO, had not been able to afford period products at least once in the last year, and 20% faced this issue on a monthly basis. Another survey of 1,000 U.S. students published in October 2019 by the period equity organization Period.org in collaboration with period underwear company Thinx has also found that one in five teens have struggled to afford, or not been able to purchase, period products, and 25% have missed class because of lack of access of period products.

"No matter where you're living, if you can't afford basic necessities, the extra expense of menstrual products is not easily afforded," Nadya Okamoto, the founder of Period.org, tells Bustle. Part of the issue, she says, is the luxury tax leveled on tampons and menstrual products in many states across the U.S.

Dr. Anne Sebert Kuhlmann, an associate professor of behavioral science and health education at Saint Louis University and the lead author on the St. Louis study, agrees. "There are some states where menstrual products are explicitly exempted from sales tax under medical equipment clauses," she tells Bustle. "However, there are others, like Missouri, where period products are taxed at the highest ‘luxury tax’ rate." According to The New York Times, tampons are subject to sales tax in 34 states across the U.S., making them more expensive. Legal challenges to achieve menstrual equity and remove taxes in 22 states have made little progress in 2019.

Knowing the true numbers around period poverty in the U.S. can be difficult, because it's a complicated problem. "I’m skeptical of studies that narrow [period poverty statistics] down to one in five or one in 10; I think that the impact of poverty and the intersection with the stigmatization or marginalization of menstruation is probably much more complicated than can be boiled down into a single number," Weiss-Wolf tells Bustle. However, experts agree that there needs to be greater awareness of domestic period poverty. "Prince Harry and Meghan Markle had a foundation in India that distributes pads on their wedding list," Dr. Sebert Kuhlmann tells Bustle. "But we haven’t talked about it much in high-income countries."

If you're wondering what you can do to combat period poverty, the answer is: a lot. "If you want to make a real change, we love to encourage people to join Period's chapter network," Okamoto tells Bustle. "Come to rallies! Publicize the issue on social media! Anyone can get involved with National Period Day on Oct. 19; we're mobilizing rallies in all 50 states."

Activism to help period poverty can take many other forms, too. "Legal and policy reform is a critical intervention, for two reasons," Weiss-Wolf tells Bustle. "Laws can affect the broadest swathe of people, but we can also destigmatize menstruation just by putting it into the public sphere." However, you don't need to run for office to help. "Write to your members of Congress about federal legislation to ensure menstrual access. Write to your state representatives, because there are many fights right now at the state level to ensure menstrual access in prisons and schools. Go to the local town council, the local school board, the town library," Weiss-Wolf says.

If you'd like to donate, Dr. Sebert Kuhlmann suggests looking into places in your area that accept menstrual supplies. "In a number of cities there are organizations that collect donated supplies and distribute them," she tells Bustle. "Get involved." And experts agree that talking about menstruation and period poverty openly can be a big help. "Raising awareness and talking about the issue is important," Dr. Sebert Kuhlmann says. Destigmatizing menstruation in general, and spreading the news that period poverty isn't just an issue in developing countries, can do a lot to help the issue.

"People menstruating intersect with and interact with all of public life. We go to school, we go to work, we use public restrooms, we live and exist everywhere," Weiss-Wolf tells Bustle. "All of these places are the places where we should be working to destigmatize menstruation, ensure menstrual access, and ensure that the experience of menstruation doesn’t cause a barrier for anybody." The fight to end period poverty in the U.S. will take a lot of work — and admitting that it exists is just the first step.

Jennifer Weiss-Wolf, vice-president of development at Brenner Center for Justice, and co-founder of Period Equity