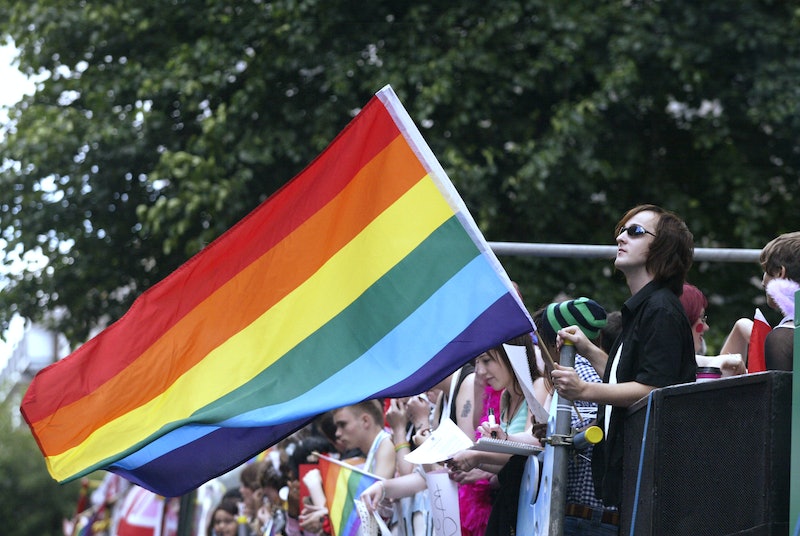 Plenty of cities get decked out for Pride Month each year, but in Atlanta, Georgia, LGBTQ pride is now a year-round fixture. Earlier this week, the city's mayor, Kasim Reed, announced that Atlanta will install permanent rainbow crosswalks at a popular intersection as a demonstration of solidarity with its LGBTQ residents. What's that? No, I'm not crying. There's something — a branch? the physical manifestation of pure joy? — in my eye.

The installation made its first appearance during Atlanta Pride Week in October 2015. As part of the celebrations, crosswalks at the intersection of 10th St. and Piedmont Ave., an area in Midtown popular with the LGBTQ community, were painted the colors of the rainbow. Despite hopes that they would be permanent, the rainbows were removed about two weeks after the end of Pride that year.

Two years later, however, the rainbow crosswalks will be back, and this time, they're here to stay. On Jun. 12, exactly one year after the Pulse nightclub shooting in Orlando, Reed announced that the city would permanently maintain the rainbow intersection. "I cannot think of a more important time to reaffirm our unwavering and unqualified support for our LGBTQ residents," he said in a press release. "I believe that symbols of unity matter."

The announcement comes on the heels of a petition urging Atlanta to repaint the sidewalks with rainbows or the transgender flag, and it received more than 22,000 signatures. (In fact, people were still signing the petition a few days after Reed's statement.) Following the announcement on Monday, the petition's creator, musician and LGBTQ advocate Sarah Rose, tweeted, "Symbolism and representation are important for a city. And I hope this paves the way for talking about more LGBTQ issues in Atlanta."

Once the project is completed, Atlanta will become one of several cities around the world with rainbow sidewalks. These installations may not be quite as useful as, say, equal protection under the law, but as Rose points out, the symbolism here is notable. In the same way that microaggressions build up over time to create an uncomfortable environment, even small shows of support can have a huge impact — and an entirely rainbow intersection isn't exactly minor. I lived in Atlanta during the installation in 2015, and strolling across those brightly-colored sidewalks lifted my mood for hours afterward. In an era of political turmoil, it's indescribably comforting to have a visible reminder that your city supports the LGBTQ community.

Besides, we can all admit that the city streets could use a pop of color. It's an aesthetic victory almost as much as a progressive one.

So next time someone tries to stereotype Southerners as intolerant homophobes, kindly remind them that Atlanta's streets are painted with the colors of the pride flag. LGBTQ rights still have a long way to go, but as far as cities are concerned, it doesn't get much more supportive than that.