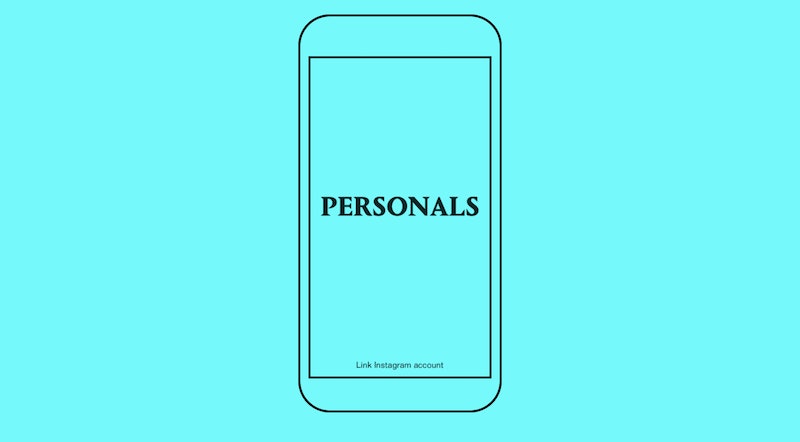 If you're a queer woman or nonbinary person who's been looking for luck in love, good news: there's an app for that. Kelly Rakowski, who runs the Instagram account @_personals_, which shares user-submitted text-based personal ads, wants to turn the platform into a full-fledged queer dating app based around the newspaper personal ads of yore. Even better news? Rakowski tells Bustle the app is nearly ready to be released in beta form.

"People enjoy texting, they enjoy reading snappy, bite size texts that is both witty and spicy," Rakowski tells Bustle. In an interview with them., she noted that the Instagram receives more than 400 submissions each month and has quickly grown to 30,000 followers. She says personals are "fun to read quickly while scrolling through your phone," and that there's also "a voyeuristic aspect to reading personals [...] it's tantalizing to peer into what people are desiring from afar."

The seeds for Personals were planted with Rakowski's first widely-followed Instagram account, @h_e_r_s_t_o_r_y. Started in 2014, @h_e_r_s_t_o_r_y is an archival Instagram account Rakowski filled with vintage photos of lesbian couples, zines, protest imagery, and vintage text-based personals from lesbians. Rakowski tells Bustle, "The personals written by lesbians in the back of On Our Backs magazines from the mid '80s to early '90s are some of the hottest and hilarious pieces of writing ever. Lesbians said what they wanted and desired, with no holding back." Rakowski told them. that the personals were widely popular among the followers of her archival Instagram, and she began encouraging followers to write and submit their own. But eventually personal submissions "took over the content" of @h_e_r_s_t_o_r_y, so Rakowski started @_personals_ just for ads. But even with an account dedicated solely to personals, "it’s impossible to keep up with demand," them. reported.

Rakowski told them. she chose to eschew the traditional dating site photo profile and make the Personals app text-only because, "You’re learning about the person based on their writing and how they express themselves — what they’re looking for and what they desire. People are looking for a different way of interacting with each other rather than just swiping through selfies. We want more than hot-or-not, throwaway experiences. It's become so demeaning." To gauge interest in the creation of a text-based dating/community app, Rakowski surveyed @_personals_' followers, and found that "only 60 percent wanted to have photos involved at all." According to them., the idea of "encountering someone’s wit and taste-testing their linguistic seduction before finding out what they look like, seems to be a large part of the mass appeal."

Personals is designed for and open to members of the queer community, and Rakowski specifies on the app's website that it welcomes "lesbians, trans men, trans women, non-binary [people], pansexuals, bisexuals, poly, asexuals, & other queer beings," along with noting that especially encouraged to join are queer people of color, "people with children, 35+ crowd, rural queers, people with disabilities, people with chronic illnesses, [and] international queers."

The site also explicitly says Personals is not made for "straight couples or cis men." Rakowski told them. she "wants cisgender men to hang back for the time being," though she may consider expanding the app to gay cis men in the future. "Lesbians and queers are the people I want to make sure feel welcome to take part in Personals," she tells Bustle. Rakowski notes that there have been "radical feminists who have taken issue with trans people included in [the] Personals community," but she maintains a "zero tolerance policy on transphobic commenters or submissions," and says "those who are transphobic will be blocked."

Personals is Rakowski's first app and first startup, and has not taken on any investors or incubator support. The Personals website says Rakowski plans to launch a crowdfunding effort June 13, and the site currently accepts direct donations through PayPal to help fund the app's creation. The text-based app would be a game changer in a dating-app landscape where photos are everything — so keep an eye out for the launch.