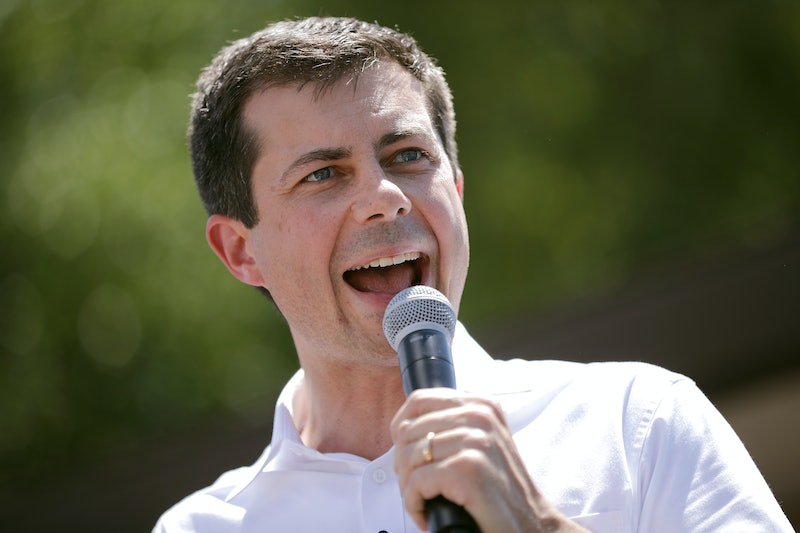 When South Bend, Indiana, Mayor Pete Buttigieg announced the formation of his presidential exploratory committee this January, he was a relative unknown. Since then, the Afghanistan veteran and Rhodes scholar, buoyed by a string of compelling television appearances and strong debate performances, has soared to the top tiers of the 2020 pack. He’s created enough familiarity with voters and national media at this point to be known simply as “Mayor Pete.” He’s also raised a whopping $24.8 million in the most recent fundraising quarter, resources that will give him the ability to compete in a narrowing, but still crowded, field of candidates.

The midwestern mayor doesn’t have the experience in federal office that many of his rivals do, instead centering his run on his local executive experience. That service has come under some scrutiny; the police shooting of Eric Logan, a 54 year-old black man, in June raised questions about Buttigieg’s record of addressing racial inequity in South Bend and complicated his campaign’s larger efforts to gain traction among black voters. Buttigieg has taken responsibility for failing to increase the diversity of his city’s police force, telling the audience at a June Democratic debate, “I couldn’t get it done,” then adding, “My community is in anguish ... and I’m not allowed to take sides until the investigation comes back. The officer didn’t have his body camera on. It’s a mess. We are hurting.”

Buttigieg stands out as one of only two millennial candidates in the race — the other is Rep. Tulsi Gabbard of Hawaii, who’s right on the cusp — and he’s argued forcefully that it is time for a new generation of leadership. If elected, Buttigieg would also be the country’s first openly gay president. In conversation with Bustle’s Alicia Menendez, Buttigieg avoided long-winded politician speak and cut straight to the point about his plans for addressing the cost of college, advancing reproductive justice, and fighting the spread of white nationalism online.

Alicia Menendez: Several of your rivals are in support of free college for all and canceling student debt. You are not. What do you believe they’re getting wrong?

Pete Buttigieg: I'm just not comfortable with the idea of low-income Americans subsidizing the children of millionaires and billionaires down to the last penny of their college tuition. Of course I want college to be affordable and even free for low- and middle-income students. I just don't think that we gain much by extending that to those who are completely able to pay. When it comes to debt, this is personal. We have a lot of college debt in our household, and I think we have to have means to make that more affordable. It's why I want to expand loan forgiveness programs, in addition to making sure we have a way to do away with the debt run up by for-profit colleges that did not deliver value.

I also think there's a fairness question. If we just completely wipe out the debt of people who are holding debt at a certain moment, whereas those who have just paid it off are told “too bad,” and those who are about to accumulate that will have come in just a little too late to take advantage of that policy. I think just as a matter of fairness, what we need to do is make college more affordable for those for whom cost would be a barrier, and manage debt in a way that makes everybody better off without making promises that are going to be difficult to keep in terms of our country's finances and that are essentially asking lower-income people to subsidize those who are better off than they are.

AM: When you call for “improving accessibility” to loan forgiveness, what would that look like?

PB: Well, we've got this public service loan forgiveness program on the books. The idea of it is wonderful, but it turns out it's very difficult to actually take advantage of. There are a lot of hurdles that only qualify for certain kinds of debt and you don't get any benefit at all unless you are sticking with the program for 10 straight years without ever missing a payment. I would set it up so that you begin to get some benefits right away, even if we back-loaded a little bit so that there's an incentive to stay with it for more years. That alone would make a big difference. I also think we need to expand what qualifies as public service for these purposes, and include things like being a medical or mental health provider in an underserved rural area.

AM: You and your husband have $130,000 in student debt. How would you be impacted by your own plan?

PB: Well, I suppose as long as we're still in public service, we would qualify for some student debt [relief] on that front. That's maybe more up to the voters than it is to me. But this is really about making sure that others are taken care of, and it's got to be coupled with the way to make college more affordable to begin with. It’s why I'm pushing for us to not only expand Pell Grants, but make them eligible for living expenses, which can be a big driver of debt, and take other measures to make sure tuition is more reasonable in the first place.

AM: Beyond calling for a repeal of the Hyde Amendment, how, specifically, would a Buttigieg presidency proactively protect and expand reproductive justice?

PB: First of all, you'll see me appointing justices and judges who respect the right to choose and understand that women's reproductive freedom is an important American freedom that they should be upholding. It also means making sure that we make the most of executive action when you look at things like what they did with the gag rule and Title X, as well as legislative questions like the Hyde Amendment.

It's clear that we need to act in using all of the different tools to secure these rights. And by the way, these are rights that are supported by an American majority. Even those who may have different, specific personal views when it comes to abortion can support the principle of Roe v. Wade and the right to choose. The attack on that by the Republican Party today represents a very radical position being imposed on millions of Americans.

AM: Would you fight to ensure coverage of abortion care in any expansion of health care you propose?

PB: We do need to make sure that abortion care is covered. One problem that I don't think people have thought about very much with Medicare for All, for example, is that it would be important, when more people are on public plans, to make sure that by the time we do that, we have dealt with the Hyde Amendment. Otherwise it'll actually be harder for people to access the care that they need.

AM: You recently released a plan to combat domestic terrorism and offer gun control. As part of that plan, you talk about the need to combat the spread of extremism online. Do you think Twitter should ban neo-Nazis and other extremists?

PB: I think so, and I think we also need to make sure that we are partnering at the policy level with tech companies to help them manage hate speech and incitement on their platforms. Some of these are corporate policy decisions, but some of these are public policy decisions. The most important thing of all is that when a crime is going to be committed on your platform or people are going to be harmed by it, there need to be resources as well as the responsibility for dealing with that and preventing it.

AM: Should white nationalist violence be designated by law as domestic terrorism?

PB: Well, there's no question that what we saw in El Paso amounted to domestic terrorism. I think that it's clear that these kinds of attacks meet the definitions, at least that I learned when I was a counterterrorism officer being trained in the military. We need to face the fact that the domestic terrorism threat is large and menacing, and also that there are steps we can take to deal with it.

AM: So you would advocate for passing a domestic terrorism law?

PB: We need to be careful to do it in the right way, but I do believe we need more resources and the tools to combat domestic terrorism, including legislation.

AM: The Democratic National Committee (DNC) recently voted down a resolution calling for a climate-focused debate. Do you think the DNC needs to create a dedicated space for you and your opponents to debate each other on climate change?

PB: Well, I would certainly be happy to participate in a debate like that. I'll also leave it to the DNC to set the rules that I and my competitors have to compete by. I believe that we can win on any fair basis and that we need whatever processes will lead to the best way for Americans to find out what we stand for, how we're different, and what we bring to the table.

This interview has been lightly condensed and edited for clarity.