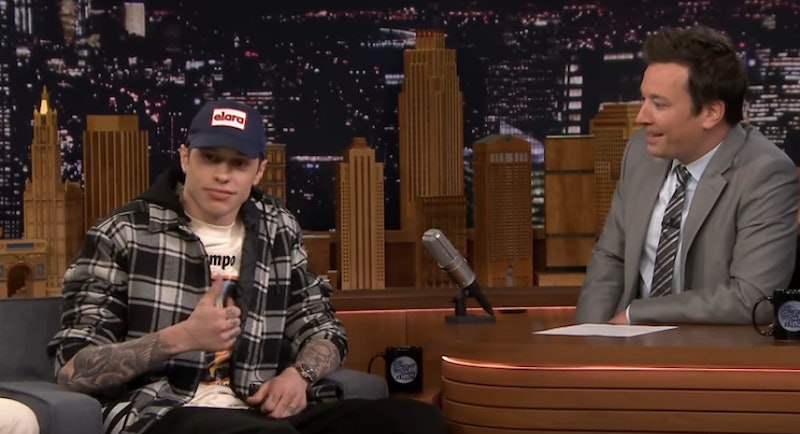 In an appearance on the The Tonight Show on Wednesday night, Pete Davidson confirmed his engagement to Ariana Grande, finally. After weeks of teasing fans and media outlets with their outspoken love for one another, Davidson declared to Jimmy Fallon that being engaged to Grande is "lit". In fact, it's so lit that Davidson has been experiencing some public admiration from other people for his relationship.

While on The Tonight Show, Davidson explained how others have been treating him differently on the streets now that he's engaged to Grande. "Dudes are walking by, and they're like [tipping their hats to me]," Davidson said, to cheers. "You ever see that Derek Jeter commercial, where he was, like, retiring and everybody just tips his hat? Some dude came up to me and was like 'Yo, man, you gave me hope."

"I'm like, I didn't know I was that ugly!" Davidson added, then showed some love for his fiancée, saying, "I'm a lucky motherf*cker."

"No," Fallon replied. "We want to know what you're wearing."

Fallon also pointed out the recent tattoo David got of a bunny mask by his ear. It's one of two tattoos Davidson got for Grande in early June, according to The Cut, the other tattoo being her initials on his thumb. Of the bunny mask tattoo, Davidson said to Fallon, "Apparently when I take a sh*t, it's news."

Davidson didn't mention the other shared tattoo that he got this week with Grande, an acronym "H2GKMO" on their hands, which stands for the phrase, "honest to god, knock me out." Davidson's confirmation of his engagement to Grande is just another milestone in an incredibly quick, whirlwind romance which only reportedly began in May, according to People.

People also confirmed Davidson and Grande's relationship on June 11, with a three carat diamond ring that was reportedly sold for $93,000 to Davidson in May by a Manhattan-based jeweler. The details on the engagement ring have raised some eyebrows, mostly because of the substantial price and the date that it was purchased, but according to Yahoo Entertainment, the ring dealer himself confirmed the purchase by Davidson.

Although Davidson and Grande have been pretty quiet with the media in regards to setting the record straight throughout the course of their relationship, they've generally kept fans in the loop via their social media posts, confirming their relationship with a never-ending stream of posts declaring their adoration for the other.

On Wednesday, for example, People reports that Grande shared a video of Davidson on her Instagram Story prior to his going to The Tonight Show, captioning it "A perfect specimen." And let's not forget that they essentially announced their relationship on Instagram, too, with a Hogwarts-themed Instagram post by Davidson on May 30.

Recently, Grande took to Twitter to defend her decision to name a song after Davidson on her new album. In doing so, she also seemed to be shedding light on her relationship in general.

In a Twitter response to a fan who criticized her, presumably for naming a song after someone she's been dating for such a short amount of time, Grande tweeted, "the truth is I been the f*ck thru it and life's too short to be cryptic n shit about something as beautiful as this love I'm in. So Pete it is."