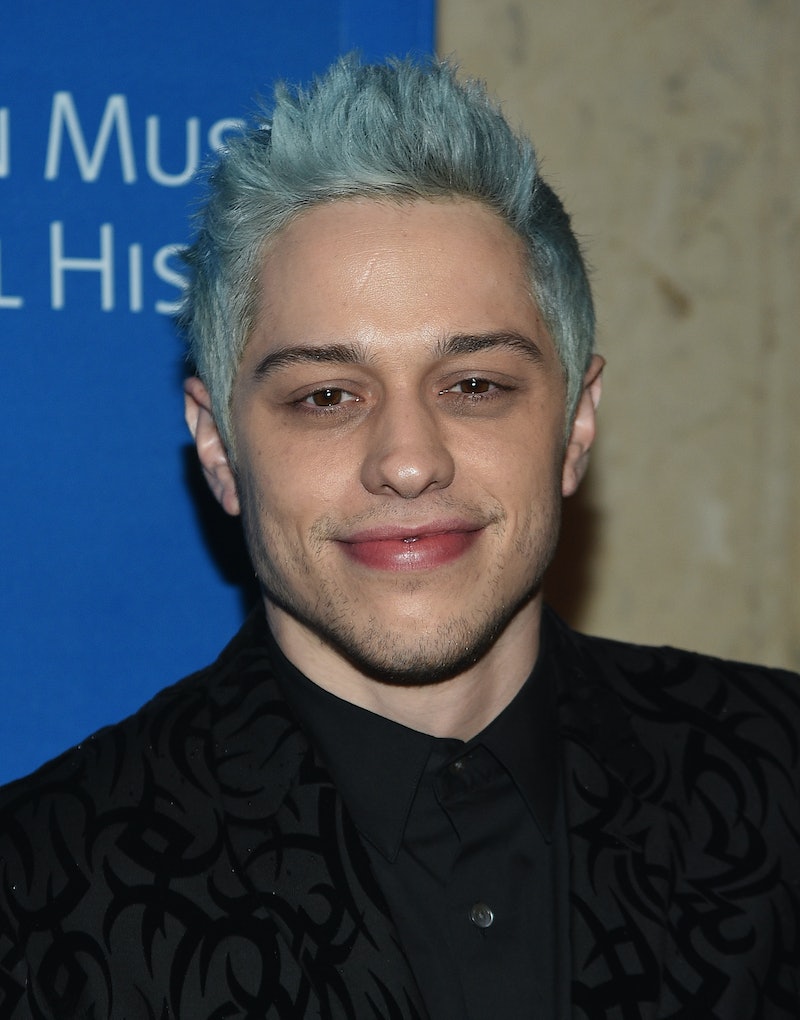 The 2019 Golden Globe Awards was certainly an exciting affair, but the afterparties for the event may have been even more so. According to Page Six, Kate Beckinsale and Pete Davidson were spotted together at a Golden Globes afterparty. But, people shouldn't jump to conclusions about a possible romantic connection just yet. (Bustle reached out to reps for Davidson and Beckinsale for comment, but did not receive an immediate response.)

An insider told Page Six TV that Beckinsale and Davidson were seen getting close at a Netflix Golden Globes event following the Jan. 6 ceremony. The source also claimed that the pair left the party together. “They were flirting all night and sipping Moët champagne,” they told the publication, "They were outside on the patio and left together.”

A report from People may shed some more light on this afterparty connection. The publication reported that the Saturday Night Live star was hanging out with his pal, Machine Gun Kelly, at the Netflix party when he started to chat with Beckinsale. A source also told People that the two cuddled at the event as they chatted. But, contrary to Page Six's report, People reported that Davidson and Beckinsale did not leave the Netflix Golden Globes party together.

It could very well be that the pair was simply chatting and hanging out at the event. So, before anyone starts to ship "Beckinson," maybe wait to see whether either of the stars confirms the romantic connection for themselves first.

According to Page Six, the Underworld actor was recently linked to British comedian Jack Whitehall. As for Davidson, he, of course, was previously in a highly publicized relationship with Ariana Grande. In October 2018, TMZ reported that the SNL actor and Grande had parted ways and called off their engagement, after first being linked together in May of the same year.

A source close to the "Thank U, Next" told People at the time, in regard to the split, "It was way too much too soon,” and continued, “It’s not shocking to anyone.” While the two have been through their fair share of ups and downs following the split, it seemed as though there were no hard feelings between them. On the Nov. 3 episode of SNL, Davidson said, about Grande and their relationship:

"I know some of you are curious about the breakup, but the truth is it’s nobody’s business and sometimes things just don’t work out and that’s okay. [Ariana is] a wonderful, strong person and I genuinely wish her all the happiness in the world."

As for Grande, she also had some kind words to say about her ex. After Davidson opened up about the online hate that he's received, the singer took to her Instagram Story to urge her followers to be nothing but kind to the comedian. According to Complex, she said:

It seems as though Davidson is doing better after sharing an alarming and emotional message on Instagram back on Dec. 15, as his recent public appearances would suggest. According to People, in an article reported in late December, he's even "enjoying being single as he is focusing on himself" at the moment. Given that information, it could just be that Davidson is simply living his best life and getting to know others, such as Beckinsale, along the way.