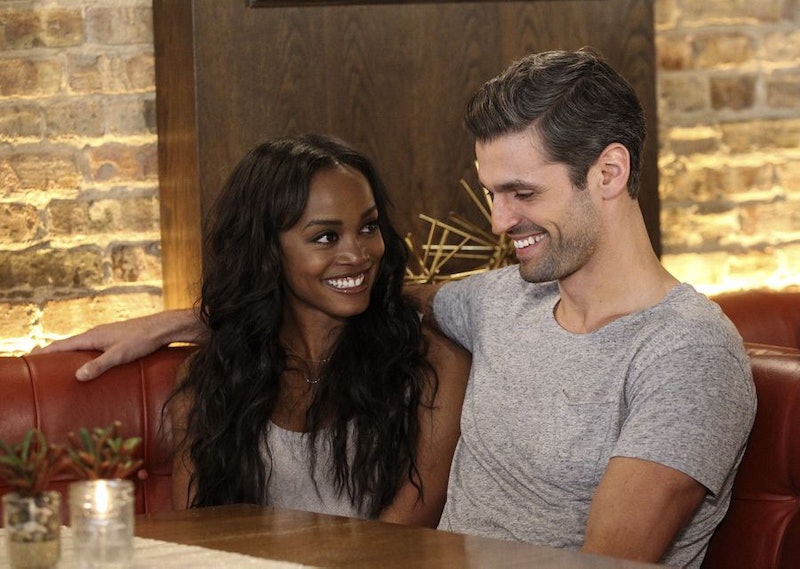 Now that the time has come to meet Rachel's family and head to Fantasy Suites, the competition between The Bachelorette contestants is definitely heating up. It might not have come out until Monday night's episode, but Peter doesn't seem to be Bryan's biggest fan... and he's not the only one. Fans on Twitter are living for Peter hating on Bryan on The Bachelorette, especially since he was so blunt about it.

A lot of the drama between the men this season died out when Lee left, but now, it seems like there could be potential for a little more tension now that the season is about to come to a close. While the guys were all in Texas to meet Rachel's family and see her hometown, Peter and Bryan got a little one-on-one time of their own together, and they didn't exactly use it for bro bonding time. Instead, Peter let him know what's up. He straight up told his competitor, "I don't want to be sitting here with you right now," and the internet went wild.

Some fans took this as an opportunity to realize they actually had more in common with Peter than they may have originally thought:

Others were just appreciating Peter's honesty:

And someone else pointed out that Peter is basically all of us watching Bryan get so much screen time on The Bachelorette this season:

And, of course, what Peter was really saying to Bryan, if you read between the lines:

Peter's been a fan favorite since The Bachelorette kicked off in May, and even now, in the end, it looks like that's definitely not going to change. If Rachel doesn't choose him, there could be even more sassiness in our future, courtesy of Peter himself and his Bachelorette fan base.

Where was all this blunt honesty weeks ago? It's just one more reason to adore Peter.