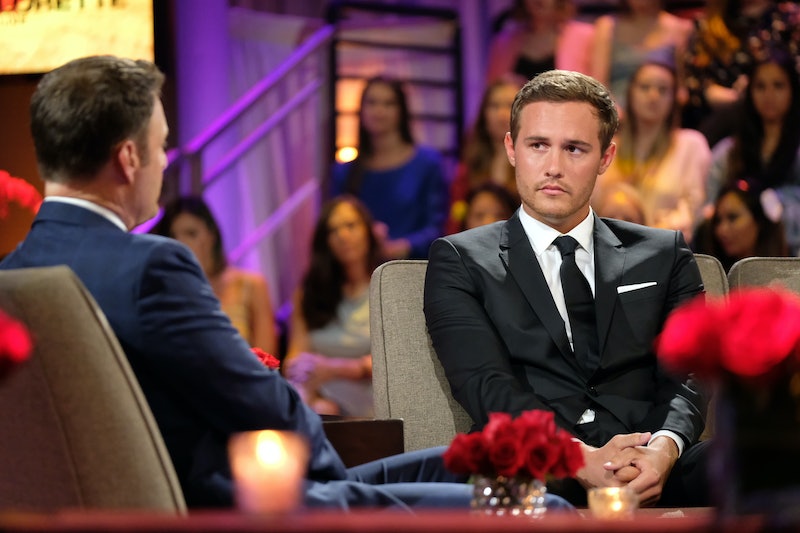 Peter has definitely been a fan favorite throughout the majority of Hannah B.'s Bachelorette season. So when his ex-girlfriend came out with accusations claiming he had broken up with her to go on the show, viewers couldn't believe it. And Bachelor Nation has been eager to hear his side of the story to help get a better sense of what happened. Now, weeks later, Peter has finally addressed his ex's claims, denying that the show had anything to do with why they are no longer together.

“There was a lot of truth to what she said in her story, but there is also a lot of truth that wasn’t mentioned,” Peter explained during a recent interview with People. “The show had absolutely nothing to do with me ending that relationship.” His statement is a direct contradiction of model Calee Lutes' claims. She previously told Entertainment Tonight that they had been in a serious relationship for six month prior to the show and had even talked about moving in together before he abruptly broke up with her around Christmas time last year.

“I thought there was another girl, so I looked at his recent followers on Instagram, and noticed that a Bachelorette producer had recently followed him,” she told ET.

But according to Peter, things between the two of them played out a little differently than that. In his interview, the pilot insisted that their relationship had reached a crossroads and that the timing of when he auditioned for The Bachelorette wasn't as shady as it sounded. “I was very serious in trying to progress that relationship and move it forward. And she wasn’t on the same page as me," he stated in the same People interview. "That being said, I wasn’t going to waste her time or my time. But the casting process and my first interview was months after we broke up.”

ABC reality chief Robert Mills echoed this sentiment on his own social media account on Tuesday, tweeting that Peter applied for the show long before he started dating Lutes. "One thing not mentioned is Peter applied for the show almost two years ago," Mills wrote. "He didn’t apply while dating anyone. Felt so bad he couldn’t say anything while everyone rushed to judgement."

This helps to further explain some of the recent comments Chris Harrison made about Peter's ex drama while speaking with Entertainment Tonight on July 25. At the time, The Bachelor host seemed to indicate that Peter's induction into the show was a little different from what fans may think. "I know it's kind of more funny than anything, about him and how he was approached by the show, how he was cast on the show, the timing of it all," Harrison remarked. "So I have facts on that that I'm not worried about at all for Peter."

Regardless, Peter still feels bad about any pain he caused his former girlfriend and wishes her nothing but the best. “It’s obvious that I hurt someone that I really did care about,” he admitted to People. “That was never my intention. And for that I’m sorry. Breakups suck!” Truer words have never been spoken.

More like this
Hannah Ann Got Engaged 3 Years After 'The Bachelor' & The Proposal Was Dreamy
By Grace Wehniainen
10 Photos Of The Wildest Limo Arrivals From 'The Bachelor' Premiere
By Brad Witter
Zach Reveals The Chaotic 30 Minutes That Were Cut From ‘The Bachelor’ Premiere
By Grace Wehniainen
'Bachelorette' Vet Clare Crawley Revealed Her Stunning Wedding Photos
By Stephanie Topacio Long
Get Even More From Bustle — Sign Up For The Newsletter
From hair trends to relationship advice, our daily newsletter has everything you need to sound like a person who’s on TikTok, even if you aren’t.