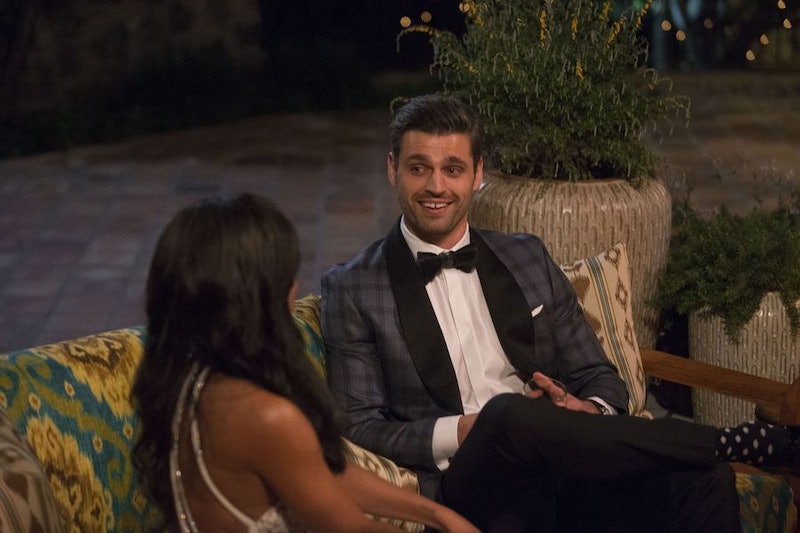 Peter, like Nick, is from Wisconsin, and when Peter introduced himself to Rachel, he mentioned that fact and told Rachel that she hadn't had much luck with guys from Wisconsin lately. A light zing, sure, but enough of a zing to call back that Rachel went really far with Nick only to get dumped by him in a yurt. Of course, I don't think that Rachel was hurt by Nick's dumping for long, because she had to know that producers were circling her to become the Bachelorette. It may have stung, but in the end, Rachel is way better off without Nick. I just can't see her hanging around the Dancing With The Stars soundstage cheering him on while he does a lackluster paso doble with Peta Murgatroyd.

More like this
Here's The Full List Of Zach's Confirmed & Potential 'Bachelor' Contestants
By Kadin Burnett and Grace Wehniainen
Rachel & Aven’s Fight In ‘The Bachelorette’ Finale Has Fans On Team Aven
By Grace Wehniainen
Where Is Former Bachelor Host Chris Harrison Now & What Is His Net Worth?
By Hugh McIntyre
Everything To Remember About Lace Morris Before 'Bachelor In Paradise' Season 8
By Grace Wehniainen
Get Even More From Bustle — Sign Up For The Newsletter