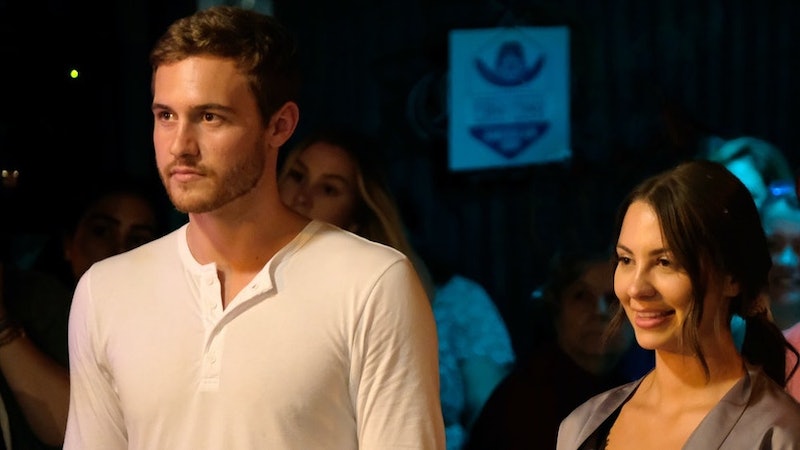 Peter Weber may have been keeping his relationship with Kelley Flanagan on the down-low at the start of their romance, but a few weeks after going public it seems the pilot is more than willing to spill some details about their love life. In a recent Cameo video for a fan's birthday, Peter revealed why he chose Kelley after The Bachelor. And he explained why the reality show setting wasn't conducive to their relationship.

“You guys want some inside scoop here on why I ultimately picked Kelley? All right, here’s what I can do,” Peter explained in the birthday message to a 16-year-old fan, which was posted on Instagram by Bachelor fan account Bachelornation.Scoop. He added that while he still thinks the nature of the show works, “I think specifically for the type of relationship between, you know, Kelley and myself just wasn’t the most organic type of situation for us if it was going to actually work."

This then prompted Peter to recall a Spanish saying that his grandmother used to always say to him, which he shared with Hannah Brown during one of their dates on The Bachelorette. The phrase in question essentially means "No matter what happens, let the waters run," which he says sums up his entire Bachelor journey. It's a motto the pilot feels rings especially true to his relationship with Kelley, given that the two of them always seem to find their way back to each other.

"Obviously we’ll see what the future holds for Kelley and I, but I think it’s a beautiful story, definitely a beautiful love story of what’s yours is yours and it will always come back to you, no matter what," Peter continued. “That’s kind of always been our relationship. We’ve kept coming back in each other’s lives. So the way I look at it, [it’s] definitely an unorthodox way [of finding love] but [it] definitely worked in the end.”

And as an added little birthday surprise, Peter even brought Kelley out to say hi and sing "Happy Birthday" to the teen alongside him. They also imparted a few words of wisdom when it comes to dating. Kelley advised to “just have fun,” while Peter suggested she “go on The Bachelor” once she hits her mid-twenties. The clip ended with Peter asking the fan to virtually accept a small red rose from him in tribute to the reality series that brought him into the spotlight.

It's a sweet gesture to bestow upon a fan, though it seems clear that the actual final rose has already been gifted to someone else.

More like this
All The Clues Zach & Christina Are Together After 'The Bachelor'
By Grace Wehniainen
Zach Addressed His "Boring Bachelor Energy" After His Group Date With Latto
By Grace Wehniainen
Rachel Responded To 'Bachelor' Fan Theories About Her TikTok With Clayton
By Grace Wehniainen
'Bachelorette' Vet Clare Crawley Revealed Her Stunning Wedding Photos
By Stephanie Topacio Long
Get Even More From Bustle — Sign Up For The Newsletter
From hair trends to relationship advice, our daily newsletter has everything you need to sound like a person who’s on TikTok, even if you aren’t.