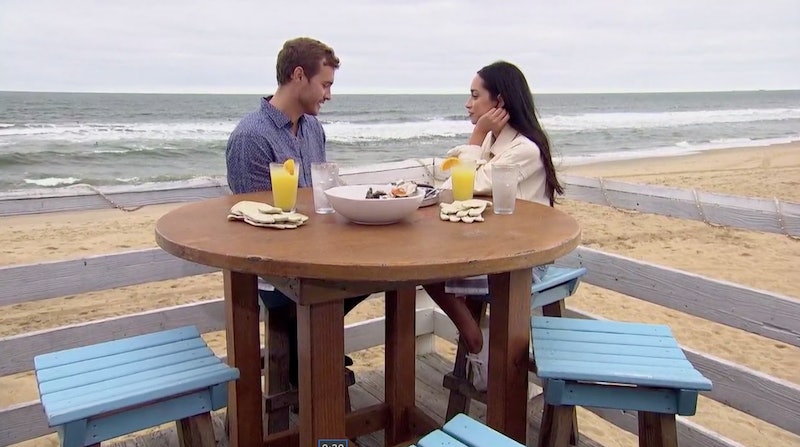 If you haven't heard by now, Kelley isn't the only Bachelor contestant to have pre-filming ties to Peter Weber. Victoria F. is reportedly acquaintances with Peter's ex-girlfriend, Merissa Pence, whose Instagram proves that they both hail from Virginia Beach. According to Us Weekly, they even ran in the same social circles before she left to film the show, and then The Bachelor happened and changed everything.

Victoria took Peter to a country concert to start her hometown date, and on their way out, he ran into Merissa. She immediately asked to give him some advice. "Just be careful, that's all I'm gonna say," she told him. "I just know what a good guy you are, and I would hate for any of who you are to be affected by somebody else ... I don't think you deserve what you're on a date with right now."

Peter was expectedly confused, and when he returned to Victoria and confronted her about it, they broke into an argument and the whole date went south. He didn't even get to meet her family before hopping in a car and leaving her in tears on her suburban lawn.

Merissa's arrival really changed the dynamic, but as she told Us Weekly, it might be for the best. If Peter would just listen.

When Merissa learned that Victoria would be dating her ex, she admittedly thought it was weird. But it has been years since she dated Peter, per Us, so she was able to let it go. “Obviously I had my moment because I’m like, you could possibly be with my ex-boyfriend and that’s a little weird, but like, I never asked her not to go on the show or anything because that’s silly,” she said. “But we went out one night for our friend Audrey’s birthday and it turned into the Victoria Fuller show because it was three weeks out that she was about to leave for The Bachelor and she just became a very self-centered person and we were all out for our friend’s birthday and she was just acting crazy. Just wanting all the attention and it was very distasteful.”

After that, Merissa said she had no interest in being around Victoria. "That just really rubbed me the wrong way,” she explained. “And from then on … I told our mutual friend, I was like, ‘Look, I’m never going to hang out with her again." That background explains why she popped up and felt the need to warn Peter about her behavior.

Victoria hasn't publicly responded to Merissa's comments yet, but she did share a vague announcement on Instagram the week the season premiered, denying "rumors" about her as "false." Sounds like this is a case for the Women Tell All special — is someone inviting Merissa to that? Let's all hope so.