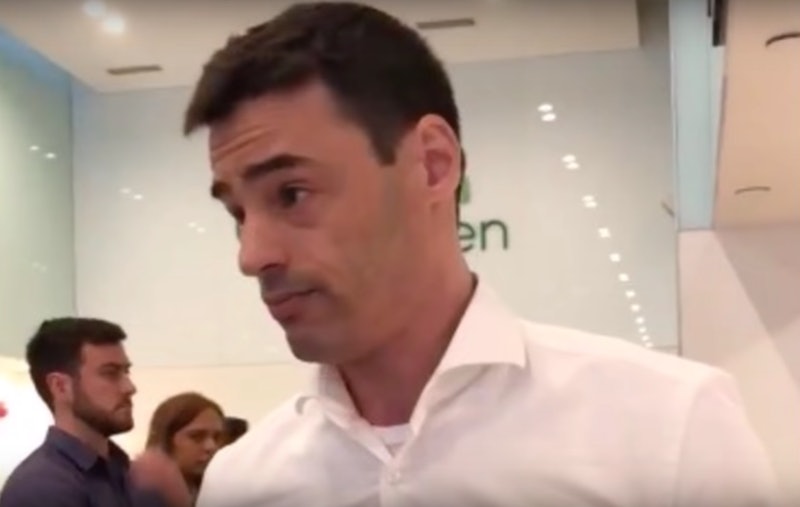 Jeffrey Guterman/YouTube
By Seth Millstein
May 17, 2018

The attorney who threatened to call ICE on Spanish-speaking restaurant workers is having a rough go of it lately. A petition to get Aaron Schlossberg disbarred gathered over 10,000 signatures just days after he was videotaped berating employees at a New York salad bar for speaking Spanish at work. He's also reportedly been kicked out of his office space, and his law firm is being bombarded one-star reviews on Yelp.

"Your staff is speaking Spanish to your customers when they should be speaking English," an infuriated Schlossberg says in the video, which has since gone viral. "My guess is they're not documented, so my next call is to ICE to have each one of them kicked out of my country." Since then, a petition at Change.org asking for Schlossberg to be disbarred has gathered 13,138 signatures and counting.

That said, the petition won't directly affect Schlossberg's ability to practice law. That's because Schlossberg isn't actually a member of the New York State Bar Association, and lawyers in New York need not be licensed by the NYSBA in order to practice law in the state.

"Under New York law, these matters are handled by the New York State Unified Court System and the Office of Court Administration," the NSBA wrote in a comment on the Change.org page. "Complaints against attorneys are investigated by grievance committees appointed by the Appellate Division of State Supreme Court."

However, Gothamist reports that New York Rep. Adriano Espaillat and Bronx Borough President Ruben Diaz Jr. have in fact filed a formal complaint against Schlossberg with the New York State Unified Court System, although the the complaint doesn't explicitly call for him to be disbarred.

After Schlossberg's deli rant went viral, an older video of him going on a similar xenophobic rant resurfaced. In that clip, which was recorded in October 2016 and republished Thursday by activist Shaun King, Schlossberg is seen shouting at entrepreneur Willie Morris after the two bump into one another on the sidewalk.

"What country you from?" Schlossberg asks Morris in the clip. "I'm going to call the police. You don't run into people. I'm a citizen here; you're not. You're an ugly f*cking foreigner." Morris is from Massachusetts, according to his friend King.

Yet another video of Schlossberg also received renewed attention in the aftermath of his deli rant. In this one, which was originally published in May 2017, the attorney is seen shouting at a group of Jews for supporting Palestine.

Schlossberg has faced significant blowback since the deli rant. The New York Post reported on Thursday that he's been kicked out of his office space, with Hayim Grant, the president of the company that operates the work space, telling the Post that he was "completely shocked" at Schlossberg's comments. Grant added that Schlossberg's views are "totally contrary to everything we believe in as a company and personally."

In addition, Schlossberg's law firm was flooded with so many one-star reviews on Yelp that Yelp temporarily shut down all activity on the page. Lastly, Schlossberg's anti-immigrant rant inspired somebody to crowdsource funds to send a mariachi band and taco truck "to cheer up the staff and attorneys at The Law Office of Aaron M. Schlossberg Esq. P.L.L.C. after a difficult day." The fund raised more than twice as much money as it originally asked for.