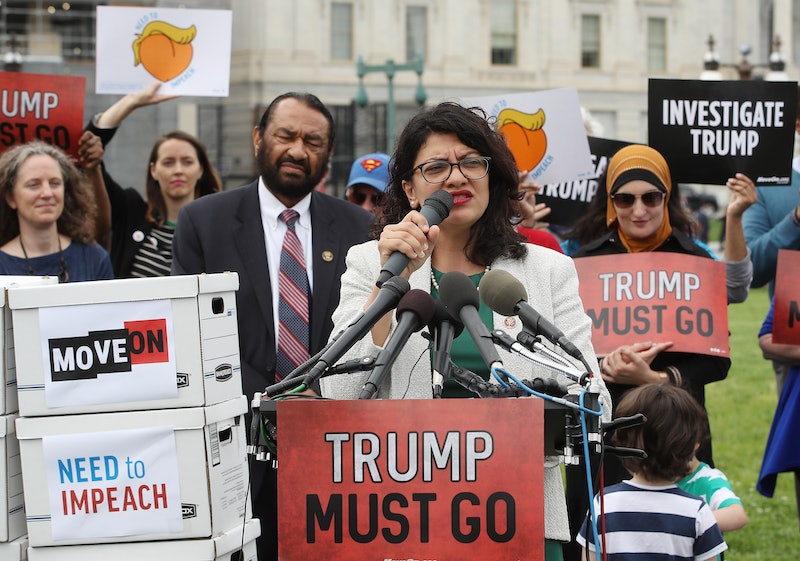 On Thursday, national advocacy groups delivered Trump impeachment petitions to Michigan Rep. Rashida Tlaib, and they were nothing to sneeze at. According to the groups — which were led in this effort by MoveOn — their petitions to impeach Donald Trump got a combined 10 million signatures. Activists from the various organizations, alongside Tlaib and Texas Rep. Al Green, submitted the petitions to Congress, CBS News reported.

Both Tlaib and Green have been outspoken in their calls for the president's impeachment. In March, Tlaib introduced a resolution that would call on the House Judiciary Committee to investigate whether or not Trump committed any impeachable offenses, NBC News reported. Tlaib also made headlines shortly after her swearing-in ceremony in January, when she said that she and her fellow Democrats were going to "impeach the motherf*cker." Green, meanwhile, introduced two articles of impeachment against Trump not long after the president's inauguration in 2017.

"This is incredible because this is how movements start," Tlaib told activists calling for impeachment outside the Capitol. "We cannot set a precedent and allow the rule of law to be eroded, allow our democracy to continue to be corrupted by this president."

Green was also present at Thursday's rally outside the Capitol, and he called on supporters to continue fighting for what they believe in.

According to CBS News, Green also argued that Trump does not actually want to be impeached. He appeared to be responding to what he described as a "myth" perpetuated by his fellow Democrats — that Trump is intentionally provoking them into pursuing impeachment, per USA Today.

"The president does not want to be impeached," Green argued. "All would-be authoritarians, would-be tyrants, want to be loved. They want to be revered. He would have us believe this. And in my neighborhood, we call this reverse psychology. This is merely his way of causing us to do that which he really wants us to do."

During Thursday's rally, both Tlaib and Green addressed the fact that impeachment has been a divisive subject among Democrats. Democratic leaders like House Speaker Nancy Pelosi have either been reluctant to pursue impeachment proceedings or expressed the belief that such proceedings would be premature.

"I think all of us want to protect our democracy and we love our country, and the complete chaos that you see before us with this current administration and this president — this is exactly why we have certain provisions in the United States Constitution," Tlaib said Thursday, per CBS News. "This is why we have impeachment process, is for those presidents currently, now, and in the past who think they think they can commit offenses that you and I would be held accountable and put in jail for."

The impeachment petitions submitted to Congress were spearheaded by progressive public policy advocacy group MoveOn, and groups ranging from Need to Impeach and CREDO to the organizers of the annual Women's March participated in the effort, per NBC News. Trump has consistently defended himself among calls for impeachment. In April, he tweeted, "Only high crimes and misdemeanors can lead to impeachment. There were no crimes by me (No Collusion, No Obstruction), so you can’t impeach. It was the Democrats that committed the crimes, not your Republican President! Tables are finally turning on the Witch Hunt!" On Thursday, the petitions made it clear not all Americans agree.