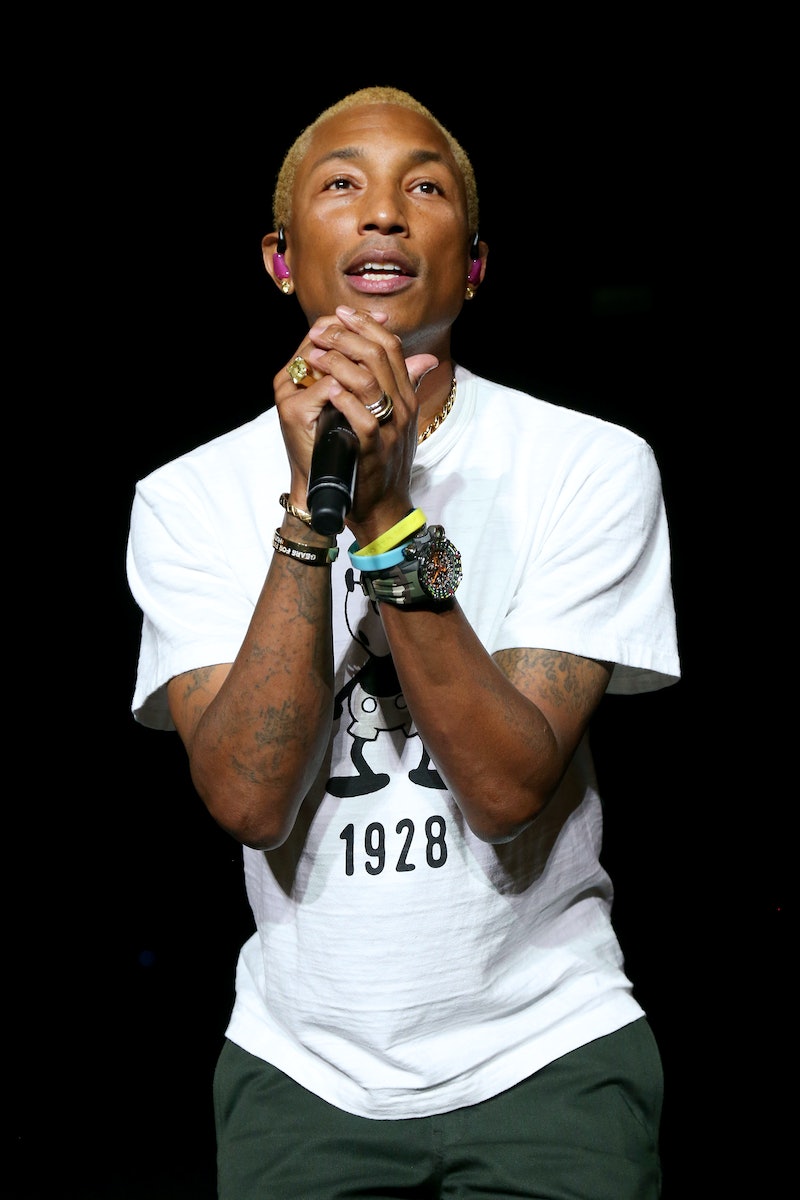 It's been six years since the release of Robin Thicke, Pharrell Williams, and T.I.'s hit song "Blurred Lines," and yet it still remains a topic of controversy. But that might be for the best, as one of the artists just admitted that the song served as a crucial learning experience. Pharrell Williams revealed that "Blurred Lines" taught him about sexism during a recent cover story interview with GQ, admitting that his perception of the track has definitely shifted over the course of the last few years.

“I was also born in a different era, where the rules of the matrix at that time allowed a lot of things that would never fly today,” Pharrell told GQ, in regards to his overall music career. "Advertisements that objectify women. Song content." He even pointed to some of his old songs as examples, admitting that a few of them contain some cringe-worthy content that he's no longer proud of. "Some of my old songs, I would never write or sing today," he admitted. "I get embarrassed by some of that stuff. It just took a lot of time and growth to get to that place.”

Initially, Pharrell admitted didn't understand why so many people found "Blurred Lines" so problematic, nor did he fully grasp just how unsettling the lyrics he'd help write were. “I didn’t get it at first," he explained, noting that he saw older white women enjoy dancing to the song. "So when there started to be an issue with it, lyrically, I was, like, What are you talking about? There are women who really like the song and connect to the energy that just gets you up."

He was also confused by the fact that some women thoroughly enjoyed the lyrics, and would sing along. "And I know you want it — women sing those kinds of lyrics all the time," he added, "So it’s like, What’s rapey about that?”

But many people did take issue with the lyrics, finding them to be inappropriately predatory and feeling that they perpetuated date-rape culture, thanks in large part to lines like: “You’re a good girl/I know you want it." That sentiment has only become more pronounced over time, especially in the wake of the #MeToo movement. And these years of analysis have apparently given Pharrell time to realize that, despite his good intentions, "Blurred LInes" could be seen as condoning chauvinistic behavior against women. "I realized that there are men who use that same language when taking advantage of a woman, and it doesn’t matter that that’s not my behavior. Or the way I think about things. It just matters how it affects women," Pharrell told GQ.

This is a huge shift from the musician's past defense of the song. In 2014, during an interview with Channel 4 News, Pharrell defended "Blurred Lines." Asked specifically about some of the lyrics at the time, he answered, "If a good woman can have sexual thoughts, is it wrong for a man to have a correct guess that a woman might want something?"

More like this
Adele’s All-Female Lineup Includes Kacey Musgraves, Mahalia, & Self Esteem
By Shahed Ezaydi
Sadie Sink Would Escape Vecna From 'Stranger Things' With This Taylor Swift Song
By Grace Wehniainen
What Is Ariana Grande's Net Worth? When It Comes To Money, She Has No “Problem”
By Hugh McIntyre
Lily Allen Was “Quite Emosh” After Performing Sober At Glastonbury Festival
By Stephanie Topacio Long
Get Even More From Bustle — Sign Up For The Newsletter