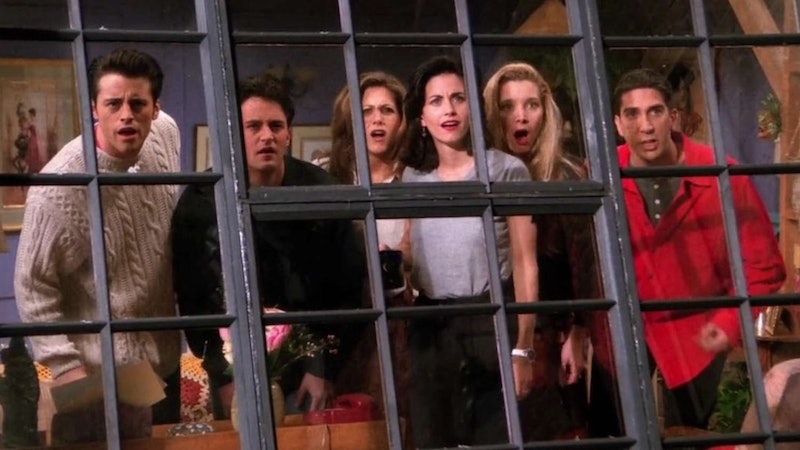 It's hard to imagine a Friends without Princess Consuela Banana-Hammock and Crap Bag, but, believe it or not, Phoebe and Mike almost didn't end up together. Phoebe Buffay and Mike Hannigan, played by Lisa Kudrow and Paul Rudd, respectively, complemented each other well and made a great couple. However, co-creator David Crane recently admitted to RadioTimes that they weren't entirely sure Phoebe would marry Mike.

Actually, there was a chance that Phoebe would've ended up with David, aka "David the science guy," who was played by Hank Azaria. "There was definitely a possibility of that," Crane said about Phoebe and David being endgame. Crane also admitted they were unsure who Phoebe would be with at the end. They even "went back and forth" over the decision. Referring to both Azaria and Rudd, Crane added, "They’re both amazing actors. I mean, both Paul and Hank are fantastic, and fantastic with her." As for why they settled on Mike, Crane said he can't remember all of the ins and outs, but only that, "Phoebe would have been great with either one."

According to Azaria, Phoebe was supposed to end up with David. In a 2016 interview with the Huffington Post, Azaria revealed that he had no idea that Mike would ultimately win Phoebe's heart, and that there was always a plan to bring Azaria back as David. "I think, honestly, what happened was Paul Rudd is so awesome that they sort of found a groove with him and [my character] became more of just the grist for that mill," he said. Azaria also said that it "did sting a little bit" and he was "sort of sad" when David and Phoebe didn't end up together.

David and Phoebe first met in Season 1, Episode 10, "The One With the Monkey." It was basically love at first sight, but David left at the end of the episode for Minsk, Russia. Years later, Phoebe met Mike on a blind date (Joey found Mike, a stranger at the time, after forgetting he was supposed to set Phoebe up with someone) in Season 9, Episode 3, "The One With the Pediatrician." In the Season 9 finale, Phoebe had to choose between Mike and David (who planned on proposing in Barbados), and, obviously, she chose Mike after he finally showed Phoebe they could have a future together.

Despite Phoebe and Mike getting married in Season 10, many fans have always wanted her to be with David instead. Following Crane's interview with RadioTimes, fans have tweeted their support for David. Twitter user @TheGloriaSophia wrote in part, "She definitely should have ended up with David. Their history/storyline was beautiful." Another person, @sophlangford12, tweeted, "Loved Mike but Phoebe and David we're destined to be together!"

There's no denying David and Phoebe had chemistry, but, apparently, Rudd's charm as Mike was just too hard to resist.

More like this
The Banned 'Friends' Ad Shows Monica As You’ve Never Seen Her Before
By Sam Ramsden
'Friends' Star Maggie Wheeler Offers Support To Matthew Perry After Reading His Memoir
By Alyssa Lapid
Mel B Thinks These Celebs Should Play Them In A Spice Girls Movie
By Alyssa Lapid
This 'Gossip Girl' Wardrobe Error Has Gone Viral On TikTok
By Alyssa Lapid
Get Even More From Bustle — Sign Up For The Newsletter
From hair trends to relationship advice, our daily newsletter has everything you need to sound like a person who’s on TikTok, even if you aren’t.