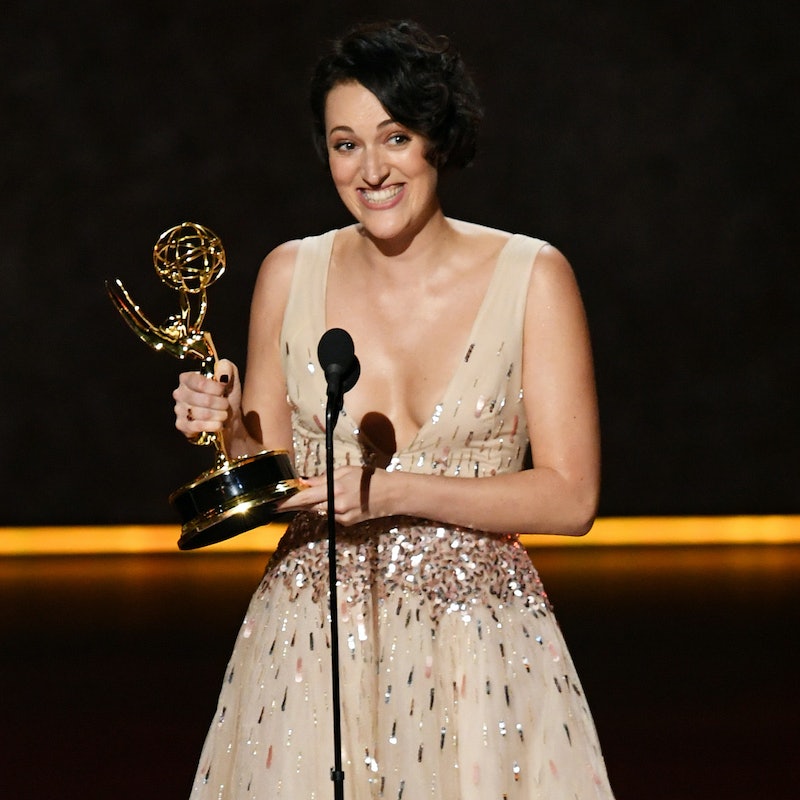 The return of Fleabag is something fans have wanted to see long before the show went on to dominate at the 2019 Emmys. However, the odds of the story continuing on has seemed pretty dismal — until now, that is. Series creator and star Phoebe Waller-Bridge thinks Fleabag Season 3 could happen at some point down the line, and she already has a very specific idea in mind regarding the new story she'd want to tell. Though as exciting as the prospect may seem, fans would have to wait quite a while in order to see it come to fruition.

During a recent appearance on Late Night with Seth Meyers, Waller-Bridge broached the subject of how she could possibly breathe new life into the Fleabag characters, admitting that it may not time to close the book on this beloved project just yet — but there's a catch. "I quite like the idea of coming back to her, well, me, when I'm 50. ‘Cause I feel like she would've had more life then, and God knows what she would have got up to," she told Seth Meyers, regarding the stipulation for bringing the series back for another go around. "And actually, seeing a character like that in her later stage of life, I think, is exciting. But I think for now, she's been through enough. We got to let her go."

Assuming Waller-Bridge is actually serious about returning to the character when she's 50, that means fans will have to wait 16 years before Fleabag Season 3. The writer and actor herself is currently 34 years old.

The actor's comments about the show's future comes as somewhat of a surprise since Waller-Bridge adamantly told reporters in the Emmys press room that despite all of the awards the series received that evening (which included Outstanding Comedy Series, Outstanding Lead Actress in a Comedy Series, and Outstanding Writing for a Comedy Series) she had no intention of continuing Fleabag's journey into another season. "To be honest, this just feels like the most beautiful, beautiful way to say goodbye to it, actually," she told reporters, according to E! News. "It does feel like the story is complete. It does feel right. Go out on a high. You can't get higher than this."

Prior to that, Waller-Bridge had also spoken on the matter at the Television Critics Association back in February, announcing that she's "decided there absolutely should not be a third," according to Stylist. But it seems her tune has changed, but any further addition to the story will have to be on her terms — and those terms apparently require Fleabag to be 50, so prepare yourselves for a long road of waiting ahead.

Thankfully, even if viewers won't get to see Fleabag anytime soon, they will get to see Waller-Bridge herself up on their screens once more since she's set to host Saturday Night Live on Oct. 5 for the very first time alongside musical guest Taylor Swift. Perhaps this means fans will be treated to a Fleabag-centric skit in the not-so-distant future.