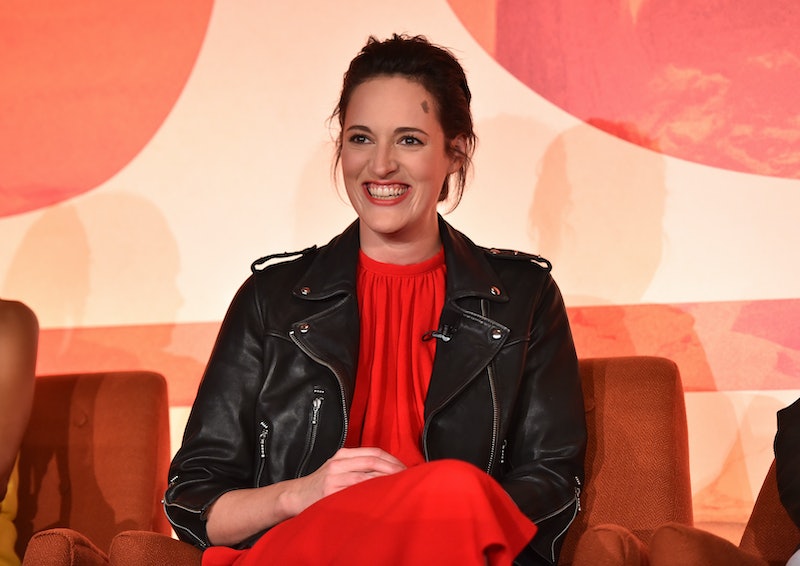 As many of you are probably already aware, Phoebe Waller-Bridge is the person behind hit shows Killing Eve and Fleabag. But even this mastermind writer, who has created some of the most badass, complex, and believable female characters on TV, has confessed to feeling like a less-than-perfect feminist from time to time. During an interview on the Andrew Marr show on March 10, Waller-Bridge expressed concern about being labelled a "bad feminist" in reaction to her Fleabag character. Just like the rest of us, she was worried about her character saying things that wouldn't adhere to the notion of being an exemplary feminist. I feel you, Phoebe.

In the interview with Marr, Waller-Bridge said: "A lot of women — and probably some men as well — feel like they could fall into a trap of being a bad feminist, which is somebody who doesn't tick all the boxes of what it is to be a perfect feminist, or be a perfect spokeswoman for the cause." This is so relatable, and the guilt associated with being a "bad feminist" is pretty universal one. (I mean, it even forms the basis of a wildly popular podcast hosted by Deborah Frances-White, which begins each episode with "I'm a feminist but...")

In her Andrew Marr interview, Waller-Bridge explained what she meant by giving the example of her Fleabag character admitting she would trade in five years of her life for "the perfect body."

Waller-Bridge said that, when she created the show, she wanted it to reflect her feminist views, but she had "bad thoughts," and did some things that didn't "align with the [feminist] message." The writer continued: "There are so many potholes in the road. It's kind of frightening and you want to be able to say the right things."

When speaking about the sensational Killing Eve, Waller-Bridge said that she found it "refreshing and oddly empowering" to see violent women on television. Series such as Luther have recently come under fire for the ways in which they depict violence against women and how frequently women are killed off, Digital Spy reports. Marr asked Waller-Bridge whether she thought that Killing Eve had escaped such criticism because it starred women. The writer replied:

"I think people are slightly exhausted by seeing women being brutalised on screen. We’re being allowed to see women on slabs the whole time and being beaten up, and in some ways that’s important to see because it shows the brutality against women. Seeing women be violent — the flipside of that — there's something instantly refreshing and oddly empowering."

Jodie Comer has been praised for her portrayal of Villanelle the assassin, but Waller-Bridge says there's "hardly any" blood in Killing Eve because BBC America bosses did not want anything too gruesome, according to the Telegraph.

Waller-Bridge told Marr: "The challenge was to make it feel very violent without actually showing anything, I think that's a very different experience for an audience."

Killing Eve is back on our screens in April, and producers say the show "could run on for years," the Independent reports. I for one cannot wait to see Villanelle back in action. A female lead kicking ass in a to-die-for wardrobe? What's not to love?

More like this
‘The Simpsons’ Will *Finally* Address How They “Predict The Future”
By Sam Ramsden
The Bestselling Novel 'The Doll Factory' Will Be Adapted Into Thrilling TV Series
By Catharina Cheung
Naomi Osaka & Emma Raducanu’s Experiences Have Inspired A New Amazon Show
By El Hunt
The 'PLL: Original Sin' Creators Say A’s Identity Will Be “Very Clear” By The Season Finale
By Alyssa Lapid
Get The Very Best Of Bustle/UK