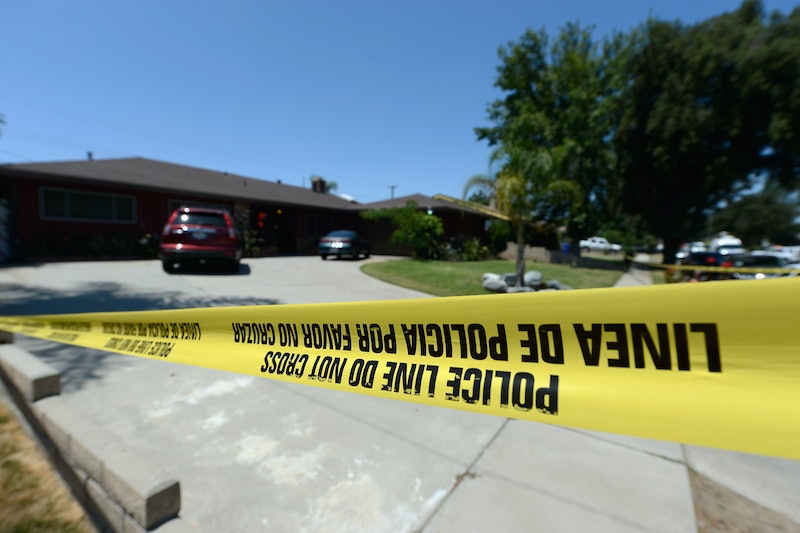 On Monday, it was reported that there was a shooting at an elementary school in San Bernardino, California. San Bernardino Police Chief Jarrod Burguan tweeted, "We believe this to be a murder suicide. Happened in a class room. Two students have been transported to the hospital." He also tweeted that students were being taken to Cajon High School for safety.

UPDATE: An 8-year-old student was confirmed dead in the aftermath of the shooting at North Park Elementary School. Jonathan Martinez was pronounced dead after being airlifted to the hospital. According to San Bernardino County Police Department Chief Jarrod Burguan, two adults also died in what is believed to be a murder suicide. North Park Elementary School teacher Karen Elaine Smith was reportedly shot and killed by her husband, who then killed himself. Another student is in the hospital in stable condition.

EARLIER: At the time of writing, authorities said two people are dead after the shooting at North Park Elementary School, and two students are injured, according to the Los Angeles Times. When asked if the shooter was one of the dead, San Bernardino police spokeswoman Eileen Hardes said, "I don’t know for sure, but it looks like it might be."

According to the Los Angeles Times, the shooting occurred a little after 10:30 a.m. local time. Around 11:30 a.m., Burguan tweeted that, "We believe the suspect is down and there's no further threat." However, even though he did not consider there to still be a threat to the school, Burguan tweeted "Police operations are continuing to secure the area."

While much is still unknown, people are sharing photos from near the site of the reported shooting that provide a sense of how students, law enforcement, and the community are responding. Photojournalist Rick Sforza shared a photo of police lining the perimeter of the elementary school.

Val Gratias, an executive producer for KTLA 5 Morning, shared a photo of students evacuating the school while holding hands.

Beatriz Valenzuela, a crime and safety reporter in San Bernardino County for the Southern California News Group, shared video of people trying to make it to the elementary school.

The Fresco News shared video of students being led away from North Park Elementary School with siren sounds blaring in the background:

A local NBC affiliate, NCB DFW, shared an aerial photo of what appears to be students being led out of the school.

NBC DFW also reported that Monica Garcia, who is the communications director for the San Bernardino Unified School District, said that the shooting "appeared to stem from a domestic violence dispute involving the injured teacher."

The Los Angeles Times noted that San Bernardino has recently suffered an increase in violence, with 2016 being the deadliest year for the city since 1995. There were 62 slayings, it reported, which was a 41 percent increase from just the previous year. San Bernardino was also the site of the 2015 terror attack that left 14 dead and 22 injured.