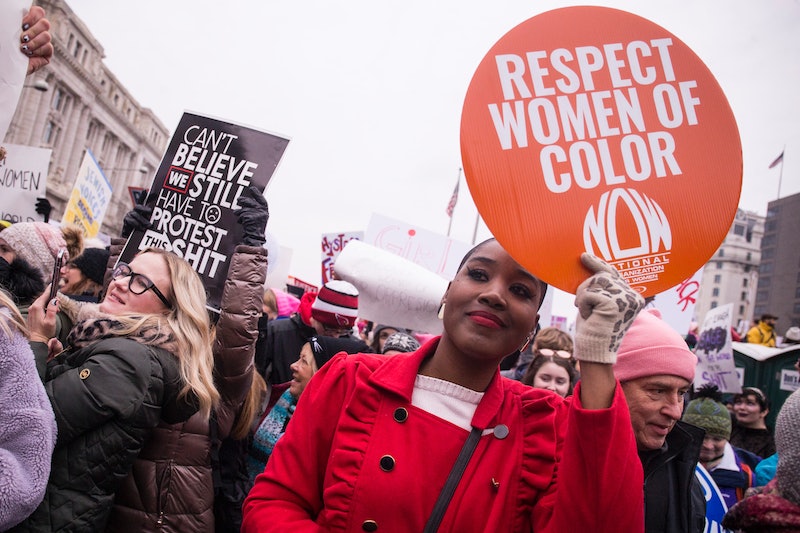 Two years after more than a million people took to the streets in cities across the United States in what has since become known as the largest single-day protest in U.S. history, the Women's March looks quite a bit different. While a number of people still gathered Saturday in Washington, D.C. for the second anniversary of the 2017 march, photos of the 2019 Women's March show turnout has been dampened due to recent controversies.

In 2017, more than one million people were reported to have turned out for Women's March rallies around the country. It was, in many ways, participants' means of welcoming President Donald Trump to the first day of his presidency with a message about their commitment to supporting the rights of women and other marginalized groups. This year, however, allegations of bigotry, rumored infighting, and even calls for Women's March, Inc. leaders to step down, including one from the woman whose social media post spurred the creation of the Women's March.

"Bob Bland, Tamika Mallory, Linda Sarsour and Carmen Perez of Women’s March, Inc. have steered the Movement away from its true course," Teresa Shook, the woman who first proposed marching wrote on Facebook in November. "I have waited, hoping they would right the ship. But they have not." Shook alleged that Women's March, Inc. leaders "allowed anti-Semitism, anti- LBGTQIA sentiment and hateful, racist rhetoric" in to the group's platform through what she defined as "their refusal to separate themselves from groups that espouse these racist, hateful beliefs."

While the controversy and criticism surrounding this year's Women's March has sparked significant national debate, the event hasn't been without criticism before. The 2017 march, for example, spurred debates about white feminism, white privilege, and inclusivity and intersectionality.

But this year's controversy has sparked divisions as key sponsors walked away, a number of cities canceled their Women's March events and some official Women's March state chapters announced plans to disband after Saturday's march in an attempt to distance themselves from Women's March, Inc.

Still, in places like Washington, D.C., New York City, and San Francisco people took to the streets Saturday for Women's March events and sister rallies. In New York, CNN spotted Rep. Alexandria Ocasio-Cortez at the Women's March in Columbus Circle. According to the cable news outlet, the representative is also scheduled to participate in a separate, competing march set to be held in Foley Square.

In a number of northeastern states, Women's March participants braved snow, slick roads, and cold temps in order to get out and march. Women's March events were also held globally with people marching in support of gender equality in cities like London and Berlin, as well as a number of Canadian cities.

According to The New York Times, marchers in Washington, D.C. reported that this year's turnout was "definitely smaller" than what was seen in 2017, although the spirit of that first march appeared to be very much alive and well two years later.

"I came two years ago," one person told the paper. "It's definitely smaller, but the spirit is very much alive."

"I'm disappointed," another marcher told The Times. "It's definitely not the turnout I was looking for."