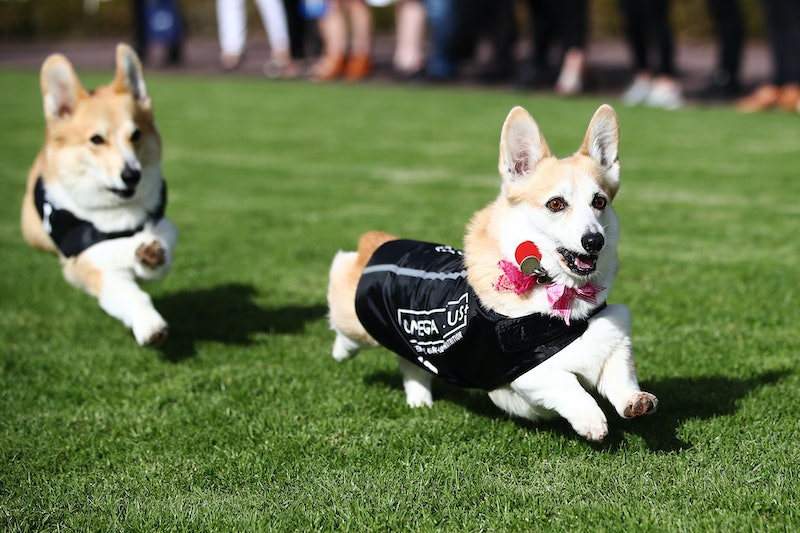 If you're feeling blue, watching short-legged dogs run their little hearts is just the boost you need. Photos of a corgi race have hit the internet, and they're the cutest thing you'll see all day. Dozens of corgis took to the Santa Anita Park racetrack in California on May 27 for the first ever SoCal Corgi Nationals, and the look of joy on the faces of these pint-sized pups will melt even the coldest of hearts.

Because corgi racing is serious business, corgi parents prepared for the competition by getting their four-legged friends into shape with tried-and-true-training methods. "We do a lot of training with the tennis ball to get him into shape," one corgi owner told ABC news affiliate KABC. "The best method has been hotdogs," corgi owner Nicole Yau added. "I'm going to be on the end and he knows I have the hotdogs."

It's kind of like how humans train for a marathon. After months of conditioning (though probably not with a tennis ball) and healthy eating, the promise of ice cream, cheeseburgers, and wine help propel you across the finish line. Hotdogs are basically wine for corgis. However, every dog is rewarded, similar to pre-school soccer games, whether they win or not. Because, witnessing this adorable AF spectacle is all the reward you need.

While corgis aren't the first breed that comes to mind when you think of speed, don't count these pups out of the race. "You wouldn't think on the stubby legs that they're very fast, but they're very fast runners," another corgi owner told NBC News. On its website, the American Kennel Club describes corgis as affectionate, loyal, smart, and called them dedicated workers of "deceptive speed and grace."

"The Cardigan Welsh Corgi is a masterpiece of the breeder’s art: Every aspect of its makeup is perfectly suited to moving cattle, and yet it is so congenial and sweet-faced that it would be a cherished companion even if it never did a day’s work," or won a race. "These athletic, rugged herders have a love for the outdoors, and they thrive on mental stimulation and physical activity." So, a corgi race actually makes complete sense.

Because corgis are herders by nature, there was plenty of body checking of fellow racers on the way to the finish line, which makes this race a combination of running and roller derby. The dogs' only goal was to end up back with their owners, who were happily waiting with the coveted treats. And, if there were ever any doubt that dogs will do anything thing for a treat, this epic corgi race certainly squashes it.

While the corgi race was clearly fun for the dogs, it was really an excuse for humans to throw a mini dog version of Coachella (Corgchella). Corgi moms, dads, and people who just like turning up for events that include dogs, food, drinks, gambling and carnival rides, donned costumes, prepared picnic spreads, and danced around like Lady Gaga had just taken the stage while they rooted for their favorite pup to cross the finish line.

Not wanting to be upstaged by their spotlight-loving humans, most of the corgis got gussied up in costumes too. So many pup parents wanted to enter their corgis in the big race that the spots sold out quickly. Corgis who didn't sign up in time to race were still allowed to attend the event as spectators. However, all other dog breeds were asked to stay home and view the photos on Twitter.

After 17 races a dog named Roi took home the title of fastest corgi. He was awarded a trophy, and probably a hotdog too. These photos of the corgi race prove that happiness does exist, and all you need to do to achieve inner bliss is watch corgis run. Seriously, bookmark this story for the next time you need a little pick me up. Because, corgis. Running. In costumes.