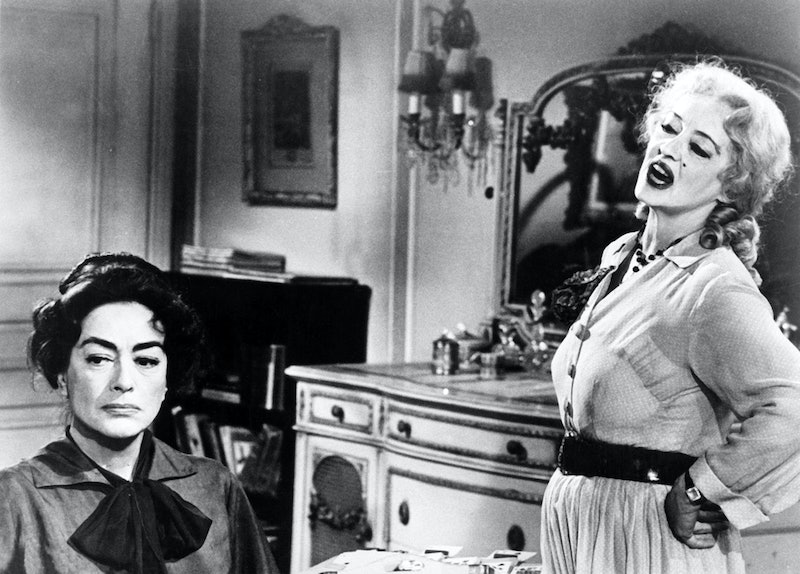 The 1962 cult Hollywood classic What Ever Happened to Baby Jane? tells the eery story of a contentious, increasingly violent relationship between two sisters. Although things didn't get quite as ugly offscreen as they did onscreen, there was no love lost between the film's two leading actors. Ryan Murphy's new series Feud explores Bette Davis and Joan Crawford's rivalry and it'll be a depiction of old Hollywood glamour, accompanied by a massive dose of scandal and controversy. Susan Sarandon and Jessica Lange respectively star as Davis and Crawford, and I can't wait to see them portray the Hollywood icons. Before you tune in for the Feud premiere, take a look at photos of the real Bette Davis and Joan Crawford.

Whatever Happened To Baby Jane? tells the story of Blanche (Crawford) and "Baby" Jane (Davis), sibling actors whose rivalry causes the relationship to turn murderous. The offscreen rapport between Crawford and Davis never reached the levels of, for example, starving a co-star or holding her captive — but some of the anger exhibited onscreen may have come from a very real place.

These photos give us a glimpse into the lives of Davis and Crawford (both onscreen and off) during the time period Feud depicts.

What Ever Happened To Baby Jane? Publicity Still

These are the women who'll be played by Jessica Lange and Susan Sarandon. Murphy's team pulls out all the stops to make his characters resemble their real life counterparts (remember when Lily Rabe was unrecognizable as Aileen Wuornos on American Horror Story?), so I won't be surprised if Lange and Sarandon are dead wringers for Davis and Crawford in Feud.

A Look At Blanche & Jane

This publicity photo of the actors in their Whatever Happened To Baby Jane? roles hints at just how creepy this psychological thriller is.

A Pose With Their Child Alter Egos

Davis and Crawford with the actors who play the child versions of their characters. The young girls look a little happier to be on set than their adult counterparts.

Their smiles during rehearsal look genuine, so I like to think that their relationship wasn't all bad.

The actors didn't let their offscreen tension distract them from perfecting their roles as Blanche and Jane.

A Candid Behind The Scenes Moment

Despite their differences, Crawford and Davis shared a laugh at least once in while.

A Totally Creepy Moment From Whatever Happened To Baby Jane?

If you've seen the movie, you definitely know what I'm talking about. If you haven't watched it, what are you watching for?

The Sibling Rivalry In The Movie Is Strong

No matter how much you and your sibling fight, you'll want to give them a hug after watching Whatever Happened To Baby Jane? Perhaps Davis and Crawford's offscreen feud fueled the intensity of their scenes together.

Seriously, It Was All Sorts of Eery

The actors with producers and Robert Aldrich, the film's director.

Outside Of Filming, They Had To Attend Events Together

Davis and Crawford probably weren't clamoring to spend more time together, but press events, premieres, and awards shows are part of the job.

I just hope the behind the scenes atmosphere on Feud is a little less stressful than the movie that inspired it.