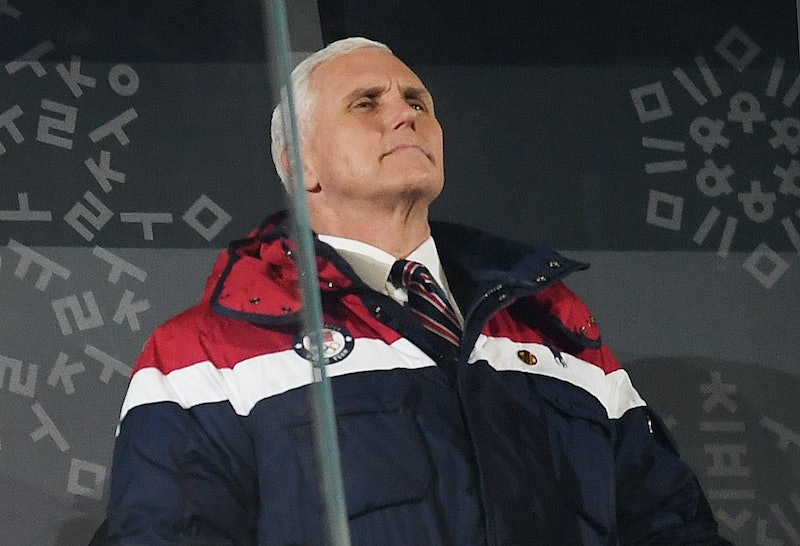 Numerous world leaders arrived in PyeongChang, South Korea for the opening ceremonies and sporting events of the Winter Games, and among them was Vice President Mike Pence. But despite his professed excitement about the games and the party atmosphere of the games' official kickoff, early photos of Pence at the Olympics opening ceremony show him looking pretty reserved. But viewers might not be watching him anyway, with Kim Yo Jong, the little sister of North Korean leader Kim Jong Un, right behind him.

Kim Yo Jong's presence at the Olympics marks the first time ever that any member of the Kim family has stepped foot in South Korea. So her attendance was going to be a really big deal in any event. But the fact that Kim Yo Jong is seated so close to Pence will almost certainly spark much speculation about the potential warming of relations between the United States and North Korea. Alternatively, Kim Yo Jong's proximity to Pence could cause further strain to an already tense diplomatic relationship.

Kim Yo Jong is considered Kim Jong Un's closest living family member. That in part explains why South Korean media have taken to calling her the Ivanka Trump of North Korea — she reportedly holds some special sway over her older brother, much the way some believe Ivanka Trump has the ability to her influence her father when no one else can.

Since their father passed away in 2011 and Kim Jong Un took over control of North Korea, Kim Yo Jong has been the rare family member to regularly appear with him at official government events.

Tensions between the United States and North Korea are personal for Kim Yo Jong. After she was made deputy director of the Propaganda and Agitation Department of North Korea's Workers' Party, the American government responded with sanctions focused on her, specifically. She was later blacklisted by the United States for her promotion to North Korea's Politburo.

Detailed information on Kim Yo Jong is difficult to come by. Even her age is in dispute: the U.S. government claims she was born in 1989, while South Korean intel puts her birth year at 1987. It's safe to say she's somewhere around the age of 30.

According to Konstantin Pulikovsky, the Russian envoy and regular guest of North Korea, Kim Yo Jong is said to be "quick-witted" and in possession of "good leadership skills." That seems to be the case, as she's taken on more senior roles in North Korea's government.

One person who may not be happy about the optics of Kim Yo Jong sitting just feet away from Pence, however, is... Pence. The vice president has been trying to downplay the significance of a seeming change in the relationship between North and South Korea in the lead-up to his Olympics appearance.

Pence also recently highlighted North Korea's harrowing human rights track record. Speaking with American troops in Japan shortly before heading to PyeongChang, Pence told them, “As we speak, an estimated 100,000 North Korean citizens labor in modern-day gulags." He also brought the father of Otto Warmbier, who died after being released from North Korean custody, as his guest to PyeongChang.

As a democratic country, South Korea has been a traditional ally of the United States, as opposed to the longstanding adversarial relationship between America and the regime of North Korea. President Trump's tweets about North Korea have seemed to further aggravate Kim Jong Un.

With South Korea agreeing to enter the opening ceremonies with North Korea under a unified flag, the symbolism implies that tensions are thawing between the North and South (that message was furthered by the Olympic torch being carried jointly to the cauldron by two women ice hockey players — one South Korean, one North Korean). Such a change in the political dynamic between North and South Korea could complicate how the United States proceeds diplomatically with both nations, and being photographed just two seats away from Kim Jong Yo may not be the kind of press Pence wants from the Olympics.