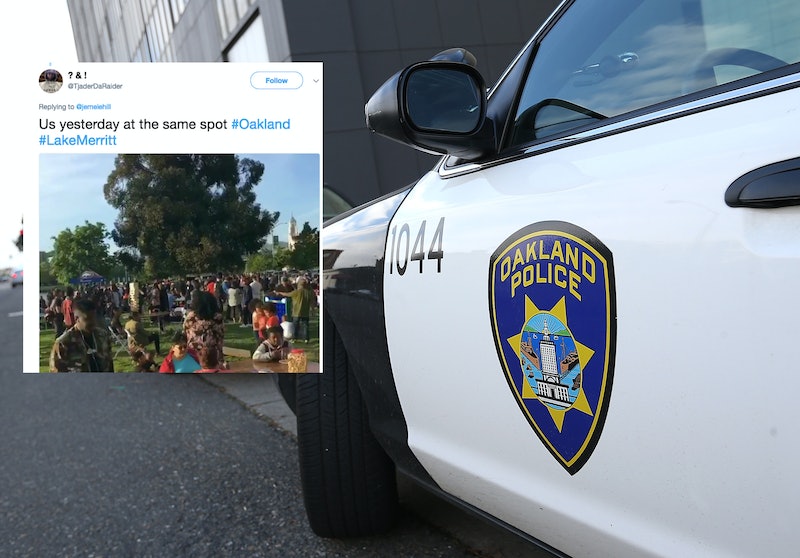 In April, a white woman in Oakland, California called police when she saw a black family setting up a barbecue at Lake Merritt. According to several reports, the woman believed the family was using a charcoal grill in a part of the park where charcoal was not allowed. The incident swiftly went viral, but residents were not ready to let the event slide so easily. Two weeks after the white woman called police on black park-goers, a cookout was organized to demonstrate community unity.

A video shared to Twitter showed a very large crowd gathered at the park at sunset, dancing to music, and generally enjoying the public space. In the accompanying tweet, user @BlakeDontCrack described the imagery as, "how Black Oakland responds to a white lady calling the cops on Black folks BBQing."

"I think it is really incumbent on all of us that when we call police, it is for emergency purposes," Oakland City Council member Lynette Gibson McElhaney said of the incident, according to The Hill. "I want to encourage people to know when to call the police, when to raise a question of regulations with the City Council, maybe there is a passive way to reach out to us."

A large portion of the incident in question was caught on camera by a white woman named Michelle Snider, who happened upon the scene and sensed that something was wrong, according to the Huffington Post. The woman who actually called the police remains unidentified.

The video, which went viral after it was posted, shows a white woman standing in front of the barbecue setup in question, holding her phone to her ear. Snider, holding the camera, asks her what she is so upset about. "Why are you so bent out of shape over them being here?" she inquires.

"Because it causes extra money from our city to do things when children get injured because of improperly disposed coals," the woman answers. The two intermittently argue, and the video ends with the woman who called the police appearing to break down in tears in front of a police officer.

"I reported over two hours ago some people were illegally grilling in the park with a charcoal grill where they’re not supposed to; I was waiting there for a response because I was told they’re coming,” the woman tells the police officer, intermittently leaning against his cruiser. "After two hours, I just called back the nonemergency line, and in the interim these people came up and started harassing me, physically pushing me." Snider maintained that she did no such thing.

One of the people setting up to barbecue was a man later identified as Onsayo Abram. He told the San Francisco Chronicle that the woman who called the police told him that he shouldn't be setting up his barbecue supplies the way he was.

"She walked up, and she was telling me that it was illegal and against the law to have a charcoal grill at the lake," Abram told the newspaper. "I proceed to tell her, 'Hey, there's not a posted sign. I believe I'm in the correct area. Go on about your day and leave me alone.' So she said, 'No, I'm not gonna leave you alone. I'm gonna need you to shut this down, or I'm gonna call the police.'"

Abram said that he told her do what she "needed to do," but that he was otherwise going to "continue to enjoy" the day.

The Chronicle reports that while Abram was, in fact, in a designated grilling area, he was located in a non-charcoal grill area. However, he said he had recently seen groups using charcoal in the same area. Huffington Post reported that, when police responded to the incident, no one was issued a citation.

The Oakland incident was just one in a string of stories concerning white people calling the police on black people for doing normal things. White people also recently called the police on black people for being at Starbucks, taking a nap, and checking out of an Airbnb, just to name a few. The Oakland community's response was to continue doing a very normal thing — throwing a barbecue — and making it a celebration.

More like this
The Best Memes & Tweets About Twitter’s Potential Shutdown
By Alexis Morillo
Joe Lycett Just Took HIs David Beckham Qatar Protest To A Whole New Level
By Sophie McEvoy
Footballer Jake Daniels Shared His Thoughts On A World Cup Boycott
By Sam Ramsden
Iran Has Issued A Death Sentence Over Mahsa Amini Protests
By Catharina Cheung, Darshita Goyal and Maxine Harrison
Get Even More From Bustle — Sign Up For The Newsletter