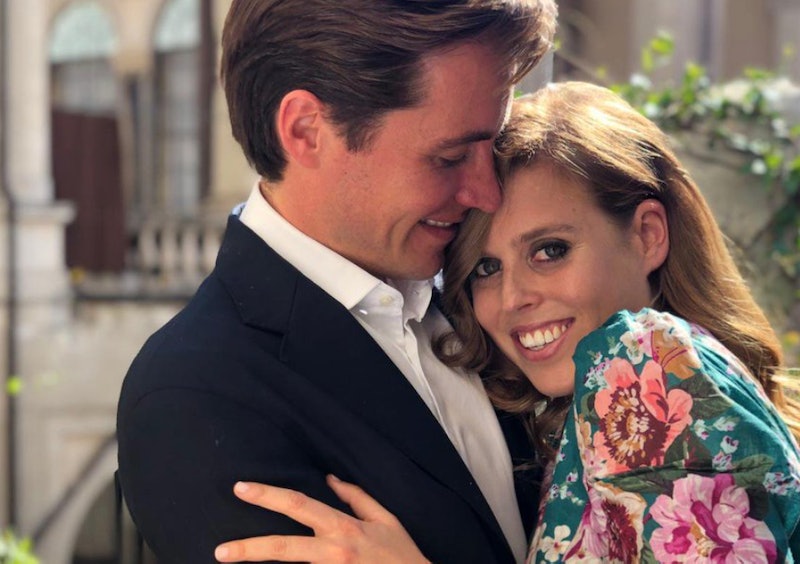 It's time to feast your eyes on another royal ring. Photos of Princess Beatrice's engagement ring will make you fall in love with the vintage-inspired jewelry. The ring is the epitome of bling, and further proves the royal family has impeccable taste when it comes to extravagant pieces.

On Sept. 26, Buckingham Palace released a statement confirming the engagement of Princess Beatrice to Edoardo Mapelli Mozzi, which took place in Italy earlier this month. The royal family shared photos of the couple and the ring on its official Twitter feed, which were taken by Beatrice's younger sister, Princess Eugenie. The sweet photos effectively capture the stunning depth and dimension of the timeless sparkler — and the love of the couple.

According to The Daily Telegraph, Princess Beatrice's engagement ring is a platinum design boasting a large, brilliant-cut center diamond and a pave diamond set. Mozzi co-designed the ring with British jeweler Shaun Leane. Leane, who previously worked with designer Alexander McQueen, is known for his edgy and provocative creations. However, the designer went with a more traditional look when handcrafting the Princess' ring.

The Daily Telegraph also reports that Leane stated the ring is comprised of "GIA certified and ethically sourced" diamonds. The ring is certainly a stunner due to the size and brilliance of the main gem. You won't be able to stop staring at it.

Leane posted shots of the ring and shared details on his brand's official Instagram feed, noting that the ring is "a fusion of Victorian and Art Deco designs." In another image, Leane shared he was able to "incorporate both Edoardo and Princess Beatrice's characters into the design" which resulted in a ring that "represents their love and lives entwining."

In a press release announcing their engagement, the couple, who have been dating since 2018, stated, "We are both so excited to be embarking on this life adventure together and can't wait to be married. We share so many similar interests and values and we know that this will stand us in great stead for the years ahead, full of love and happiness."

Princess Beatrice, who is Queen Elizabeth's granddaughter and the daughter of her son Andrew and his former wife Sarah Ferguson, will exchange vows with Mozzi, a property tycoon, in 2020.