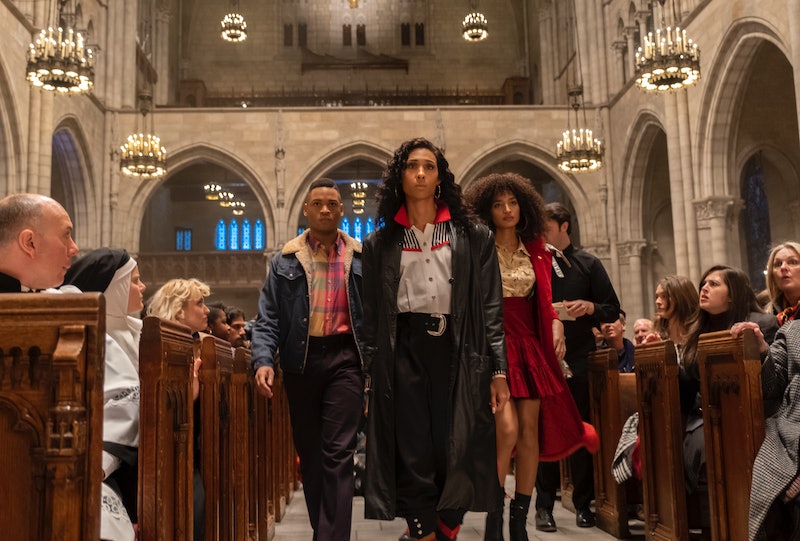 Spoilers ahead for the Pose Season 2. After its 2018 debut, Ryan Murphy's Pose returns for Season 2 on Tuesday, June 11. Whereas the first season took place in 1987, this new installment opens in 1990, where Madonna's song "Vogue" has just become hit. In short, "Ballroom is in," as Pray Tell (Billy Porter) exclaims. However, the premiere also depicts a sobering, historical event: an ACT UP protest, which many of the main characters participate in. And if audiences were to compare the Pose "die-in" photos with historical ACT UP protest images, they would realize just how accurate the Season 2 premiere is.

According to the ACT UP website, the organization's title stands for the AIDS Coalition to Unleash Power. It was founded by an activist collective, according to New York Magazine, which included Larry Kramer, Charles King, and Eric Sawyer (the latter two of whom would go on to help found Housing Works), among others. One such member was Michael Petrelis, who was diagnosed with AIDS in 1985, per NPR. As a result of his examination, he soon realized just how little was being done about the medical epidemic. "I just thought because I was so angry that there should have been more angry people," Petrelis told NPR. And thus a movement was born.

Eventually, these "angry people" began performing public demonstrations, and ACT UP was formed in 1987, per NBC News. "[The protesters] would storm people's offices with fake blood and cover people's computers with [it]," How to Survive a Plague author David France told NPR. "They locked themselves to politicians' desks. At one point, they barged into a meeting of a pharmaceutical company and turned over the shrimp cocktail tables." The organization's motto was "Silence = Death," and they were certainly not staying silent.

By 1990, the AIDS death toll had reached over 120,000, according to amfAR, and ACT UP was furious about it. The organization demanded that the FDA force insurance companies to cover AIDS treatments and include a more diverse swath of individuals in their drug trials, among other demands, per NBC.

Naturally, Pose addresses these important and effective protests in its second season, with characters like Angel, Blanca, Pray Tell, and Damon performing a "die in" at St. Patrick's Cathedral in the Season 2 premiere. Audiences will recall that both Blanca and Pray Tell were diagnosed with HIV, and it's clear that these characters are going to begin advocating for their health and the wellbeing of everyone around them this season.

One key character this year is shaping up to be Judy (Sandra Bernhard) — a health worker who we see talking to Blanca about her condition in the trailer. "Just like Blanca brought Damon into the world of ballroom in Season 1, [Judy] is going to bring Pray Tell and Blanca into AIDS activism, into the medical industrial complex, into pharmaceuticals, into AZT, all of this stuff," co-executive producer, director, and writer Janet Mock tells Bustle. She continues, saying that Season 2 will "break down the structure of late '80s/early '90s AIDS activism and the fight for access to medication for poor people and people of color, too."

Indeed, by this point in history, HIV/AIDS had been in the public lexicon for nearly a decade — the first cases were discovered in 1981, per HIV.gov. However, nine years later, and the LGBTQ+ community were quite literally still fighting for their lives. Consequently, Pose's "die in" storyline is almost certainly modeled off of a historical event, which took place the year prior.

This selfsame protest occurred at St. Patrick's in 1989, per the New York Times, where members of ACT UP protested Cardinal John Cardinal O'Connor and his earlier comments on contraception. Per the article, 4,500 people were outside the church while dozens stormed inside during a service, which mirrors the Pose scene. One such protester was the aforementioned activist Michael Petrelis. "Loudly, I stood up on the pew literally blowing the whistle on centuries of horrible treatment by the church toward gays and towards women," he recalled, per NPR.

And when even that didn't feel adequate, the activist took up another approach. "I started screaming, 'Stop killing us! Archbishop O'Connor, Stop killing us!'" Petrelis told NPR. As a result of their demonstration — which included lying down in the aisle — 111 people were arrested, according to the NYT. "The strongest prayer I've ever made in my life was on the floor of St. Patrick's," a protester named Christopher Hennelly told the publication.

And this powerful moment — in which politics and religion reluctantly intersected — was adapted onscreen for Pose. "In the '80s, the Church had projected so much morality onto a virus," Pose writer Our Lady J tells Bustle. "I think some of that was based in prevention because it was sexually transmitted disease for the most part.... But also people used it to discriminate against people and to further deepen the racism, transphobia, and homophobia that had already been so ingrained into American culture."

And while HIV is no longer the death sentence that it was in the '80s and early '90s, it's still a sobering part of American history and one that's important for audiences to recall. "It's my mission to create as much empathy around characters living with HIV as possible so that we can lean into our humanity around disease," Our Lady J says. "I think that's the end of this epidemic."