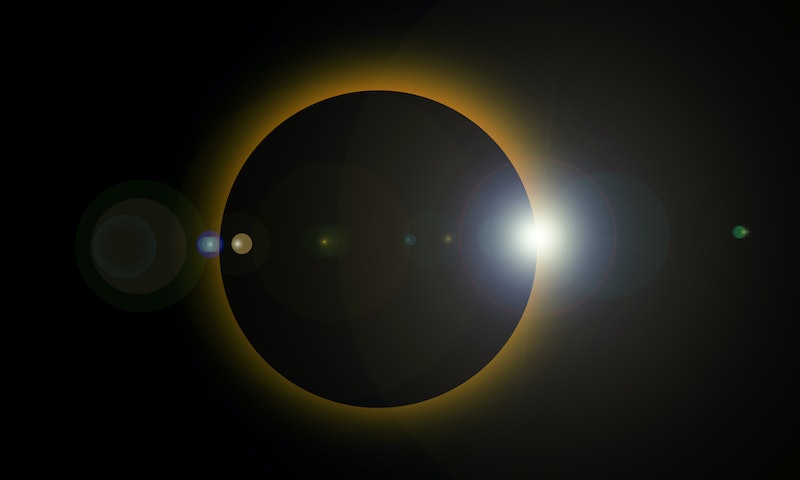 If you don't happen to be in Europe, Asia, Australia, or Africa you unfortunately missed out on catching an in-person glimpse of the 2019 solar eclipse on Christmas. Dubbed the "ring of fire" this spectacular daytime view features only a blazing outline of the sun, as the moon temporarily covers its celestial center. The appearance is striking, as it is rare — each year there's an average of only two solar eclipses, which are viewable to only certain isolated parts of the planet.

Up-lookers local to this solar eclipse were treated to an extra holiday gift from the cosmos when they gathered outside, bespectacled with protective eyewear, in awe as the day was briefly disguised as night and the celestial bodies embraced. And while it's certainly far more profound to witness this experience in person, some of the magic can surely be captured on film.

Here, we've put together a collection of images to help depict the special event, digitally. If you don't already have it on your calendar, jump ahead to Monday, April 8, 2024 for North America's next total solar eclipse for your last chance to check out this phenomenon in person before 2045 and honestly at that point we might be living on the moon, who knows.

This photo was taken in India when the eclipse reached totality, behind it, solar flares are captured.

Snapped just after totality, this photo was taken in Singapore and captures the intense night look that occurs with totality.

Another view from India, this picture captures the event when it's in the partial stage. The moon's shadow gradually slides over the sun, creating a waning and waxing crescent shapes before and after totality.

This image shows the partial solar eclipse as seen in Malaysia. the cloudy weather in the Kuala Lumpur obscured some of the view but created a dramatic look.

This photo taken in Sri Lanka shows what the eclipse looks like in the partial stage through a protective lens.

In complete totality, it's no mystery why this sight is described as the "ring of fire".

This stunning image from Bintan Island, Indonesia shows what the partial eclipse would look like to the naked eye.

Though the weather got in the way for some viewers, the incredible event was still visible through the clouds here in Malaysia.

This awesome snap of the partial solar eclipse captures stunning solar flares that look almost fantastical, bouncing off the sun in every direction.

Can't get enough? Check out the live stream footage of the 2019 solar eclipse here thanks to the Institute of Astronomy in Colombo, Sri Lanka: