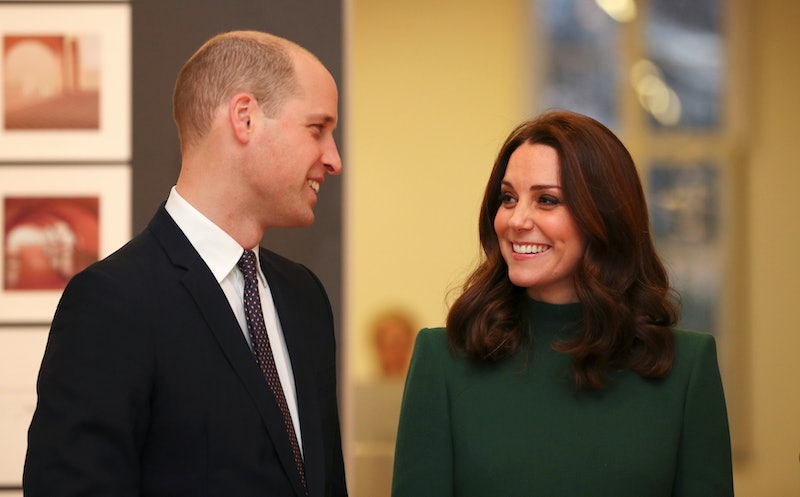 Hot on the heels of the news that Kate Middleton, aka the Duchess of Cambridge, gave birth to her and Prince William's third child on Monday, April 23, the photos of the new royal baby are here. And obviously, they're the definition of adorable.

On Monday, that same day, the world got the first glimpse of the new prince when the duke and duchess both appeared outside St. Mary's Hospital in London to show off the newest addition to their family. Like their siblings Prince George and Princess Charlotte before them, this served as the child's first introduction into the world. When they appeared outside of the hospital, William and Catherine greeted reporters and well-wishers and showed off their little bundle of joy. They waved to the crowd and cradled the new baby, although they didn't answer any questions.

Similar to Kate and Will showing off their newborn outside of St. Mary's hospital, the late Princess Diana and Prince Charles, both appeared outside of the location when princes William and Harry was born. When the Duke of Cambridge was born in June 1982, Diana and Charles both appeared outside of the hospital together, as they headed home, and gave the world its first look at the heir to the throne. And in 1984, Harry has his debut. So, at this point, it's a tradition to get the first glimpse of a newborn royal outside of St. Mary's Lindo Wing.

And here's a close-up of Middleton holding her new son.

Now, here are close-ups of the baby himself:

As previously stated, William and Catherine also gave the world its first glimpses of George and Charlotte in a similar manner. The royal couple welcomed their first child, George, into the world in July 2013. The future king was brought out by his parents, who looked overjoyed in their matching blue-hued ensembles. During their appearance, the couple answered a few questions about their baby, with William even joking that his son had a "good pair of lungs on him, that's for sure!"

Interestingly enough, the couple said during the interview that they hadn't chosen a name for their son at that point. The name reveal came on July 24, 2013, as the BBC noted, two days after George's birth (on July 22) and a day after his first public introduction into the world (which was on July 23).

In May 2015, the world was introduced to the Duke and Duchess of Cambridge's second child, Charlotte. The couple didn't stay to answer any questions during their appearance outside of St. Mary's, as they did following George's birth. Although, they were seen leaving the hospital as a family. Before they drove off (with William in the driver's seat) the prince gave a big smile to all of various photographers and fans waiting outside of the hospital as he placed Charlotte's carseat in their vehicle.

Like George, Charlotte's name reveal didn't come until two days after her birthday (which was on May 2), according to CNN. The source also noted that Kensington Palace released a copy of her birth certificate via their Twitter account, which detailed her full name, Charlotte Elizabeth Diana. Her middle names are an obvious nod to her great-grandmother, Queen Elizabeth, and her grandmother, Princess Diana.

Since the royals have been open about sharing photos of their family in the past, it's likely that fans will have loads of photo-ops featuring their new son in store for them. On Charlotte's second birthday, Catherine shared a photo of her daughter, that she had taken herself, in order to celebrate, as USA Today noted. Not only is the duchess an awesome photographer, but the snap is also just too darn cute!

While fans got to see the first few photos of the newborn royal recently, it's likely that the royal family will share even more adorable photos (possibly taken by Catherine herself) of the new prince sometime in the near future.