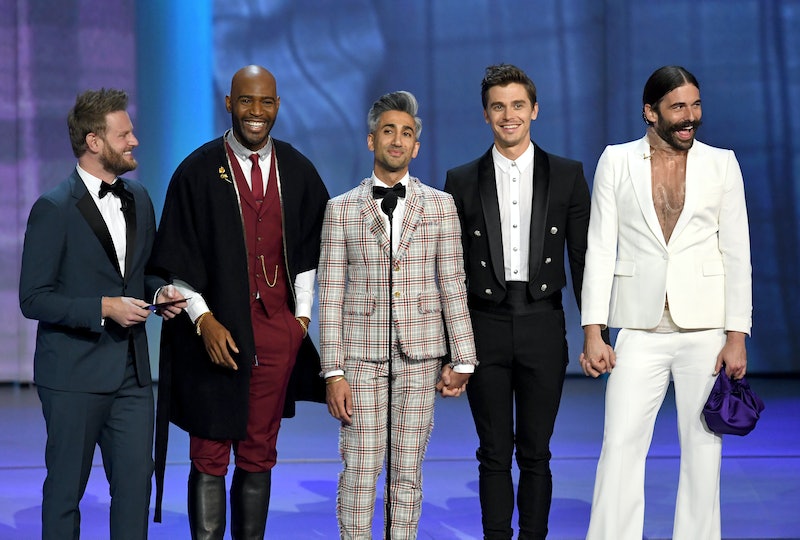 The 2018 Emmys may have proven to be somewhat lackluster for those watching from the comfort of their couches, but as usual the Fab Five from Queer Eye proved to be a highlight of the evening. Jonathan Van Ness, Karamo Brown, Tan France, Antoni Porowski, and Bobby Berk all stepped out together on the red carpet Monday night, and if their Instagram accounts are any indication, they had the time of the lives. In fact, photos of the Queer Eye cast meeting celebrities at the Emmys will give you a serious case of FOMO and make you wish you had been there to celebrate alongside them.

This group always shines in the spotlight and award shows are clearly no exception. The Fab Five took every opportunity to take selfies with some of their favorite Hollywood stars and just generally fawn over the whole experience, grateful to be included on television's biggest night. The morning after the Emmy Awards, their Instagram posts and stories were flooded with their various encounters and joyous festivities throughout the night. Fans can almost feel their excitement radiating from the images, proving that these fabulous humans are capable of getting star struck just like the rest of us. Suffice it to say, they seemed to have one heck of a good time.

From chatting with the Mother of Dragons herself to fangirling over the flawless Claire Foy, Jonathan was beside himself with joy from the moment he arrived at the Emmys.

Tan in particular definitely made a point of making the rounds to mingle with as many celebs as he could, including Broad City stars Abbi Jacobson and Ilana Glazer as well as The Kissing Booth's Joey King. But the heartfelt message that he captioned alongside his selfie with The Crown's Claire Foy showcases just how grateful he is to be part of such a special event.

"The most amazing woman, to round off this incredible weekend. I feel so blessed and overwhelmed that I got to experience this.That little Pakistani-English boy inside feels like the greatest imposter, but I couldn’t be more grateful for all that Queer Eye has brought me, and for everyone who has welcomed me in to their lives, with open arms."

OK, so this one was actually taken at an Emmys pre-party the night before, but there is never a wrong time to include a photo with Tina Fey. Antoni appropriate captioned this: "When dreams come true." Same.

Selfies with Fey, Maya Rudolph, and Judith Light is basically our collective aesthetic. Also, can you tell that the Fab Five are huge fans of The Crown?

And as an added bonus, it turns out that Mandy Moore is a huge Queer Eye fan and the This Is Us star posted a photo of meeting them on her own Instagram story:

Anyone else experiencing some serious Emmy envy right now? But when it comes to having such a magical night, no five guys deserve it more.

More like this
Julia Haart’s Husband Fired Her As CEO Of Elite World Group
By Brad Witter
Watch The Gripping First Trailer For The 'Harry & Meghan' Netflix Doc
By Jake Viswanath
At 28, Prue Leith Was In A Secret Affair & Sharing Apple Pie With Stoned Neighbors
By Grace Wehniainen
Miriam Haart & Girlfriend Nathalie May Have Broken Up After 'My Unorthodox Life'
By Brad Witter
Get Even More From Bustle — Sign Up For The Newsletter