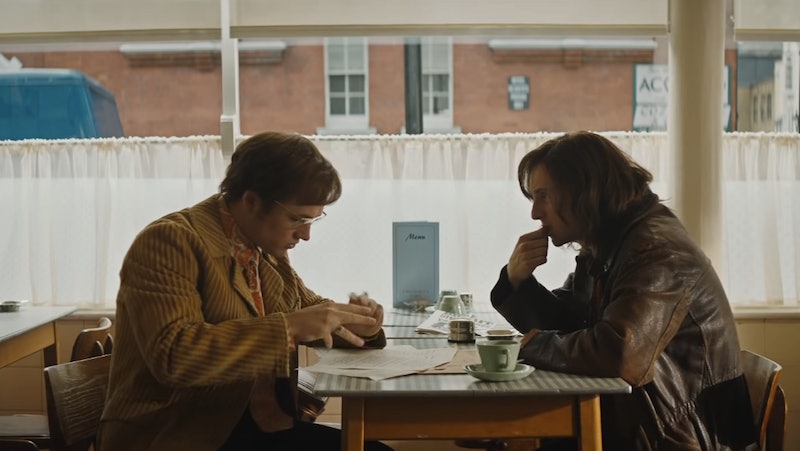 Pretty much anyone going into Rocketman knows what Elton John looks like, so it's easy to compare him to Taron Egerton, the actor who portrays him in the film. But some of the people who move in and out of his life may not be quite as recognizable. This photo comparison of the Rocketman cast and the real people will help place you in the era of John's life that the movie shows.

Not everything in Rocketman is totally factual. The timeline is moved around in some places in order to include key points of John's life, and the film itself is pretty fantastical, featuring dream sequences and choreographed song and dance scenes. Still, the point was that it would be honest to John's experience, which means that while there are things like a child Elton John singing to an adult Elton John at the bottom of a swimming pool, the main characters featured are all actually from the artist's life. John wrote of the film in a piece for The Guardian, that it's "like my life: chaotic, funny, mad, horrible, brilliant and dark. It’s obviously not all true, but it’s the truth."

In addition to John, Rocketman features his songwriting partner of 50 years, Bernie Taupin, his manager/boyfriend John Reid, and his mother, Sheila Farebrother, among others. Here's a look at how the some of actors compare to the real-life people behind their characters.

In the film, John is played by Egerton while Taupin is played by Jamie Bell. John wrote of Egerton and Bell in his Guardian piece, "Jamie and Taron have even managed to capture my relationship with Bernie, which is frankly a miracle, because I really have no idea how that works."

As for how they look, Bell has more of a young, long-haired Taupin look in the film, and Egerton was made to look more like John with his hair, too. The actor told Jimmy Kimmel, "We sort of dyed my hair orange, thinned it out, shaved my hairline up, but it grew back." Asked if he was afraid it wouldn't grow back, he responded, "Every single day."

Reid is played by Richard Madden, who, like his character, is Scottish. For the role, he was given darker hair and some heavier eyebrows. Madden doesn't have to sing much in the film, but during an appearance on The Tonight Show, he said, "Thank god for autotune ... It's not my strong point, singing and dancing."

Throughout his life, John had a rocky relationship with his mother, Sheila Farebrother, which actor Bryce Dallas Howard definitely brings across on-screen. Howard explained in an interview with The Hollywood Reporter how her costumes helped her get into character and where the inspiration for her look came from. "The way we approached it is, Sheila had dark hair and Elizabeth Taylor was a really good friend of Elton's; it was that era, so we decided to go in that direction with her, probably more glamorous than was the case in reality," she said. (A picture of a younger Farebrother can be seen in this People story.)

Renate Blauel was John's wife, to whom he was married from 1984 to 1988. John was out as bisexual at the time of the wedding, but told the Los Angeles Times in 1992, "Even though I knew I was gay, I thought this woman was attractive and that being married would cure me of everything wrong in my life ... And my wife did love me ... But it didn't change my way of life. I wasn't a sexual philanderer during that time, but I certainly didn't stop taking drugs and alcohol, and when you take that amount, you can't have any relationship."

In the film, Blauel is played by Celinde Schoenmaker. The film is only her second credited film or TV role after a part in a BBC production.

Lastly, we have Kiki Dee, the singer who performed with John on the song "Don't Go Breaking My Heart." (She's also known for "I've Got the Music in Me".) In Rocketman, Dee is portrayed by Rachel Muldoon, who previously had small ensemble performer roles in Mamma Mia! Here We Go Again and Mary Poppins Returns.

As you can see, the film took some liberties with the appearances of some of the characters, too, either for consistency in how they look throughout the film, or to make them a little more fantastically glam, like John's mother. As the subject of the film said, though: The truth is still there.