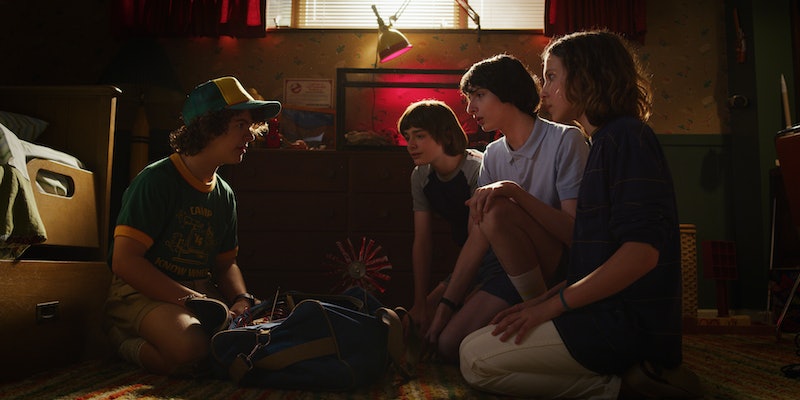 To say that the official Stranger Things Season 3 trailer didn't disappoint would be an understatement. Released on Wednesday, the footage proves not only that Hawkins is in for another monstrous attack from the Upside Down, but that there have been a lot of changes happening inside the town itself along with all of its residents. Sure, there's a new mall which looks awesome, but the changes also come in the form of our favorite little team of misfits who are starting to look a lot less like kids these days. In fact, if you compare photos of the Stranger Things kids in Season 1 vs. Season 3, you can see very clearly how much they've changed throughout these past few years.

Considering that their real-life counterparts are smack dab in the middle of their teenage years, it makes sense that you would see some very prominent growth spurts between seasons. It's also mostly why there's always a significant time jump that occurs, therein helping to explain why Eleven/Jane (Millie Bobby Brown), Mike (Finn Wolfhard), Dustin (Gaten Matarazzo), Lucas (Caleb McLaughlin), and Will (Noah Schnapp) all look so different — something that has never been so apparent up to this point. "We're not kids anymore," Mike can be heard saying in a voiceover. And he's not exaggerating. They definitely aren't as young and carefree as they used to be. But if you still need a little more convincing on the matter, the photo evidence below doesn't lie...

The hair length in and of itself proves just how much growing this badass lady has done over these past three seasons. Hopefully, she still has a deep love of Eggo waffles though, which should carry on way into adulthood.

It seems those days of playing with Walkie-Talkies is now long over.

From the look of things, he and Max are still on really good terms, which could mean love is in the air for Season 3. You know, when they aren't too busy fighting off the Mind Flayer and just general nightmare-ish things that tend to find their way to all of them.

He may have the same adorable curly hair, but Dustin has proven to be a force to be reckoned with lately. Poor Lucas learned that lesson the hard way in the Season 3 trailer.

Will went through a huge ordeal in Season 1 when he was trapped in the Upside Down for the majority of the season. And based solely on the Season 3 trailer alone, things aren't looking that much better for him. Poor Will looks stressed out and this time maybe his friends won't be able to save him.

Granted, actor Sadie Sink doesn't look quite as different as her fellow cast members since she made her debut in Season 2, but it's still worth a look at the comparison.

It's amazing what a difference a couple of years can make and the talents of these not-so-youngsters will only continue to grow. July 4 can't get here fast enough.