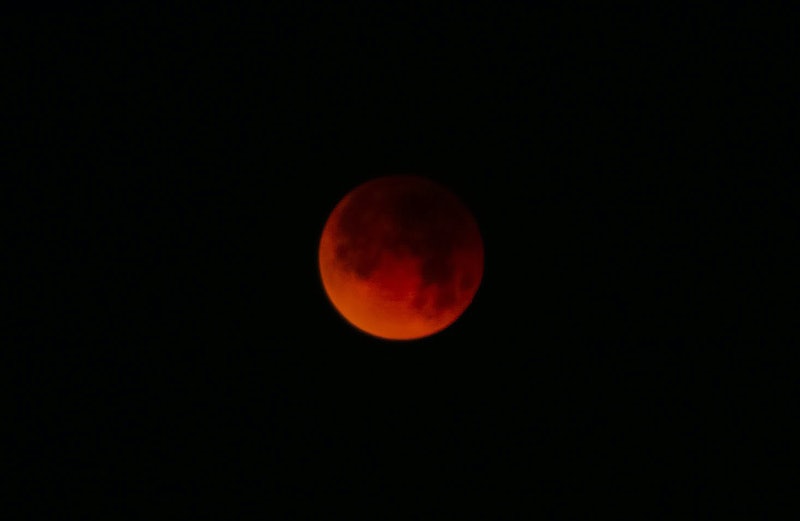 Any planetary ~space~ event is worth sharing on the internet — especially the ones that occur at times when it's just not super convenient for most people to witness said planetary space event firsthand. Case in point? A serious astronomical phenomenon, a super blue blood moon, occurred in the early hours of Jan. 31 when most of us were fast asleep in bed. Not following? Well, I'll just let these photos of the super blue blood moon do the talking, because they truly capture how breathtaking the sky was as we all got some much-needed zzzs.

If the phrase "super blue blood moon" sounds to you like it must be something out of a sci-fi movie, you're not entirely wrong. Basically, it was a mash-up of the names of the three cosmic events that took place on Jan. 31 — a supermoon, a blue moon, and a blood moon (also known as a total lunar eclipse). According to USA Today, these events haven't occurred in a trifecta like this, at the same time, since 1866. Anything that happens once every ~150 years might as well be straight out of a space movie, no?

If you did miss seeing the super blue blood moon IRL — and since it was best viewed between about 4 and 7 a.m. PST on the west coast, I can hardly blame you — you'll definitely want to check out these awesome images. And even if you did catch it, well, then you know it was a lunar show worth reliving through photos the morning after.

Assuming you're not an astronomy buff, you probably have some questions about what was actually happening up there to create these amazing images. Let's break it down as we ooh and aah over the pictures.

According to Space.com (which I'll naturally trust with all space-related matters), a supermoon happens when a full moon roughly lines up with the moon's perigee — aka the point in its orbit when it's closest to our own planet. As a result of this positioning, supermoons appear up to 14 percent larger and 30 percent brighter than your average full moon. And since the perigee for the Jan. 31 supermoon was the closest of 2018, the view was especially impressive.

Per EarthSky, a blue moon is what we call the second of two full moons occurring in the same calendar month. There are usually 12 full moons each year — with one rising on a monthly basis — and a blue moon constitutes the 13th. Since we already experienced a full moon on Jan. 1, the full moon that rose on Jan. 31 is a full moon. Blue moons are pretty rare (ever heard the phrase "once in a blue moon?"), but in 2018, we're actually experiencing something extra special: Two blue moons in the same calendar year. The next one will rise on Mar. 31. The last time we had two blue moons in one year was 1999, and we won't experience it again until 2037. So, yeah, it's kind of a big deal.

According to Time and Date, "total eclipses of the moon happen at full moon when the sun, Earth, and moon are aligned to form a line." During the eclipse, Earth blocks any direct sunlight from reaching the moon, causing it to appear red and lending it its gory nickname.

The good news is that you don't need to have a total command of all this info in order to appreciate what an amazing sight the Jan. 31 moon was (and it was!). Your new working knowledge of all of these phenomena will only help fill in the gaps of these Twitter-sourced snapshots.

Who needs the Super Bowl when we have the super blue blood moon?