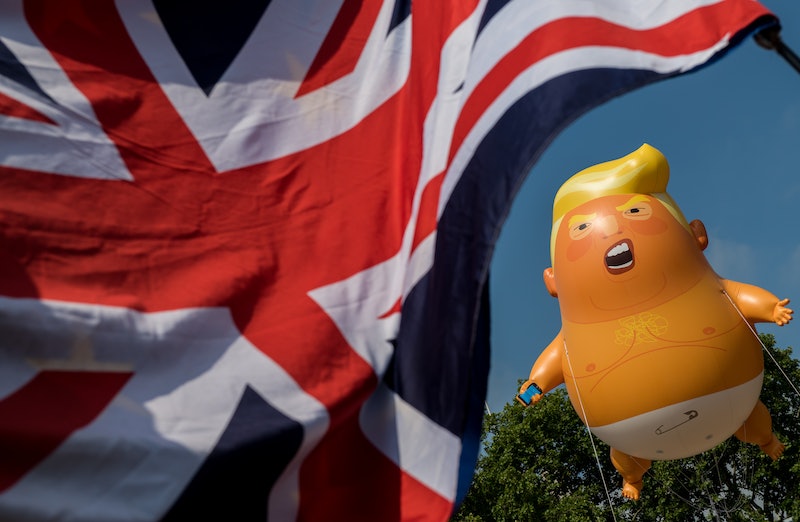 President Trump's visit to the United Kingdom prompted what may be one of the most memorable protests yet of his presidency. Activists blew up an enormous balloon depicting him as a baby, wearing a diaper and holding a mobile phone, and flew it outside of the British Parliament in London. Photos of the Trump baby balloon provide a good — and disconcerting — look at the sky-high protest.

Demonstrators told The Sun that the balloon's purpose was to make sure Trump "knows that all of Britain is looking down on him and laughing at him." One protester told The Guardian, "For me this is British political satire at its finest. ... It is a creative, safe and non-violent way to make a real political statement and hold oppressors to account."

It's not clear whether Trump caught sight of the balloon on Friday. He scheduled most of his visit to take place outside of London, where the major protests will be held. The United States' U.K. ambassador told reporters that Trump isn't intentionally trying to avoid the demonstrations. "The president is merely trying to get as impactful a trip as he can get in a 24-hour period," he said.

But Trump himself says otherwise. "I guess when they put out blimps to make me feel unwelcome, no reason for me to go to London," he told The Sun in an interview. "I used to love London as a city. I haven't been there in a long time. But when they make you feel unwelcome, why would I stay there?"

Trump's interactions with the balloon may be limited, then, to photos on the internet and elsewhere. Here are some of the ones he might see.

With The "Babysitter" Team

The balloon was controlled by a group of activists dressed in red boiler suits with the words "Trump Babysitter" on the back.

London Mayor Sadiq Khan and the Metropolitan Police approved the balloon. "The idea that we restrict freedom of speech, the right to assemble, the right to protest because somebody might be offended is a slippery slope," Khan told BBC Radio, according to Reuters. "We have a rich history in this country of having a sense of humor as well."

Snarling And Preparing For Liftoff

Activists raised over £29,000 (the equivalent of around $38,200) for the project, after aiming for £5,000, according to The Guardian. They hope to use the extra funds to take the balloon to more protests, like Trump's upcoming visit to Australia.

The balloon wasn't allowed to go up before 9:30 a.m. The Guardian reports that activists erupted when two military helicopters flew over the area around 9:15 a.m., hoping that one contained the U.S. president. If so, Trump probably got a view of the balloon's backside.

The balloon flew around 10 meters, or 33 feet, in the air, according to Reuters.

The balloon is around six meters, or 20 feet, long, according to The Sun.

Looming Large Outside The Parliament

Reuters reports that around 1,000 people assembled in Parliament Square on Friday and that over 64,000 people are planning to attend other anti-Trump demonstrations in the capital. One of these other protests, according to The Sun, was a "Keep Trump Awake" gathering where the president stayed last night, in which people banged pots and drums and blew vuvuzelas.

Staring Down The Flag

This one deserves a caption contest.

One protester's response was a certain rude hand gesture. A U.S. citizen who was present told the Trump babysitters, according to The Guardian, "As an American it means so much to us that you have done this. Thank you so much."

Visitors From Far And Wide

The Reverend Nigel Sinclair, a religious leader from Leeds, was among those who traveled from out of town to see the demonstration. "I think it's fantastic," he told The Guardian. "It's a very British response to a horrible world leader."

Coming Back Down To Earth

According to ABC News, the balloon flew for about two hours.

Activists also petitioned police to allow them to fly the balloon over Trump's Turnberry golf course when he visits Scotland later this week, but were denied. Still, the London protest seems to have made its mark, judging by Trump's displeasure in anticipation of the event.

One of the babysitters told the BBC, "The thing that the Trump balloon does is that it brings an element of fun to the protests, but it also gets under Donald Trump's very thin skin."