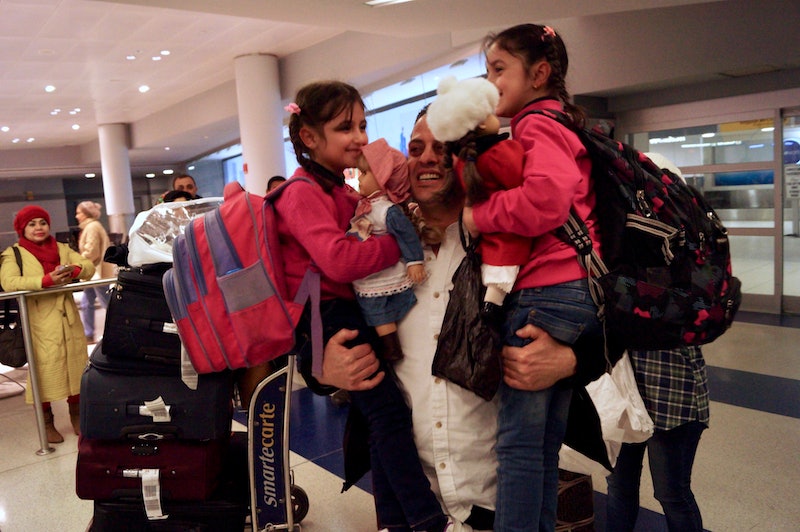 Days after his family had been denied entry into the United States as a result of Trump's executive order, Fadi Kassar was finally able to welcome his wife and two daughters home in an emotional reunion at John F. Kennedy International Airport in New York City.

Despite holding the proper visas for travel to the U.S., Kassar's wife and two daughters were detained Jan. 28 at an airport in Kiev, Ukraine, while attempting to travel to the U.S. as a result of Trump's executive order, which effectively closed the border to all Syrian citizens. According to the Hartford Courant, Kassar's wife and daughters had their visas revoked before they were put on a plane back to Jordan.

Kassar, who has been living in Milford, Connecticut, since 2015 after he was granted asylum in the United States two years ago. Like many of those feeling war-torn homelands, Kassar's story is a complicated one. After leaving Syria, Kassar and his wife resettled with their daughters in Jordan, a country currently hosting more than 655,000 Syrian refugees, the majority of which live below the poverty line, according to data from Amnesty International.

Following a rigorous vetting, Razan, Hnan, and Lian were awarded visas to the United States roughly a year after Kassar applied for them. However, thanks to an executive order Trump signed in late January, those visas were effectively nullified even though the family was already en route to the U.S.

Connecticut Sens. Chris Murphy and Richard Blumenthal took the Kassar family's story to Washington, working with local immigration attorneys, U.S. Customs and Borders, and the State Department to ensure the visas would be honored and the family would be reunited.

"Tonight, the Kassar family gets to breathe a huge sigh of relief," Sen. Murphy said in a statement released Thursday. "It's outrageous that Trump's dangerous executive order forced them through unconscionable hoops to get here. Tonight's good news for the Kassar family is only a dim light of hope — there are hundreds of other families out there crying themselves to sleep because they won't be able to see their loved ones."

Pictures from the Kassar family's long-awaited reunion show just how big of an impact Trump's executive order can have on families:

Fadi Kassar welcomes his two daughters to the U.S. as his wife Razan looks on tearfully. The family was reunited Feb. 2 thanks to assistance from immigration attorneys, Connecticut Sens. Chris Murphy and Richard Blumenthal and various nonprofit organizations.

Fadi Kassar carries his two daughters Lian, 5, and Hnan, 8, through JFK Airport on Feb. 2 after greeting them with American Girl dolls donated by supporters assisting the family in their resettlement to Milford, Connecticut.

Welcome To The United States

Fadi Kassar is all smiles following the arrival of his wife and two daughters. Among those assisting the Kassar family reunite after Razan, Lian, and Hnan were stopped from boarding a flight bound for the U.S. in Ukraine on Jan. 28 following Trump's executive order was global Jewish nonprofit HIAS.

Fadi Kassar walks with his wife Razan and their two daughters Lian, 5, and Hnan, 8, through JFK Airport. After more than two years apart, the Syrian family's reunion was delayed another five days after President Trump's recent executive order threw a wrench in Razan, Lian, and Hnan's travels.

Together for the first time in more than two years, Fadi Kassar and his family prepare to depart John F. Kennedy International Airport for their new home in Milford after Trump's executive order threatened to derail their reunion.

While the Kassar family managed to reunite after their visas were revoked following Trump's executive order, the ending to their story is unfortunately less common than their story itself. Although initially reported a few hundred people had been affected by Trump's executive order, the State Department claimed Friday roughly 60,000 visas had been revoked as a result of the ban. That number was reported as more than 100,000 by an attorney arguing on behalf of the government in federal court, the Washington Post reported.