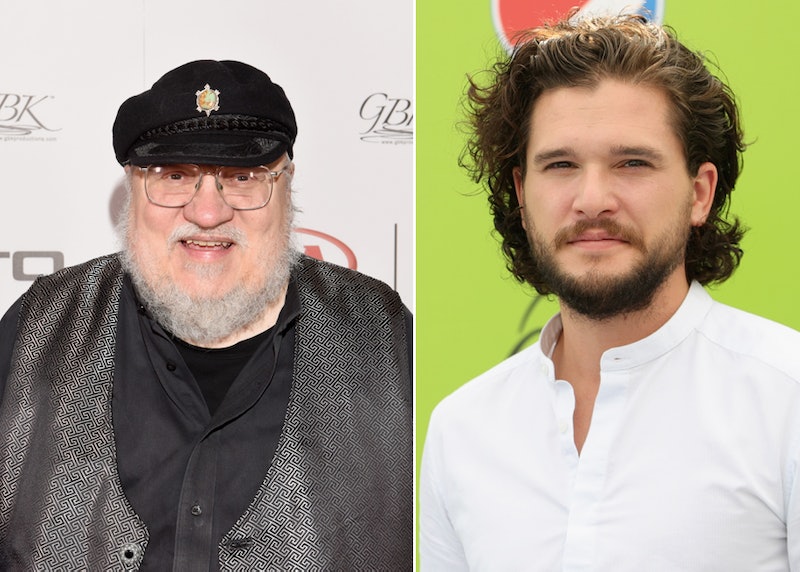 On Sunday, the Game of Thrones Season 7 finale will climb aboard an ice dragon (ack, is it too soon?) and swoop down onto our televisions, presumably to chill us to the bone with its drama, its battles, and whatever “The Dragon and the Wolf” means. And maybe, just maybe, we'll find out Jon Snow has been George R.R. Martin this whole time. (Yes, that is a huge and ridiculous "maybe." Take it with a grain of salt that's as big as Dragonstone.)

BuzzFeed’s Ryan Broderick rocked Twitter on Thursday when he shared a picture of the actor who plays the King of the North and the high school yearbook photo of the Game of Thrones author. The following statement is not an opinion, but an objective fact: In these two images, young George R.R. Martin and Kit Harington look alike. A lot alike. Understandably, this tweet has been raking in the likes and retweets.

This is not the first time fans have noticed a resemblance between young GRRM and Harington. Back in May, the man behind GoT tweeted a photo of himself that was taken in 1976. A photo of himself that, as many pointed out, calls to mind a certain GoT character who knows nothing. In July, Twitter user @cthulhou posted a side-by-side comparison that only bolstered the GRRM-and-Jon-Snow-are-twinzies case. And, thanks to Broderick, that very side-by-side is now back in the spotlight. Precisely where it belongs.

It’s just… it’s so… are they… how are… what kind of time travel sorcery is going on here? If Harington starts wearing a black fisherman’s cap, it'll be game (of thrones) over.