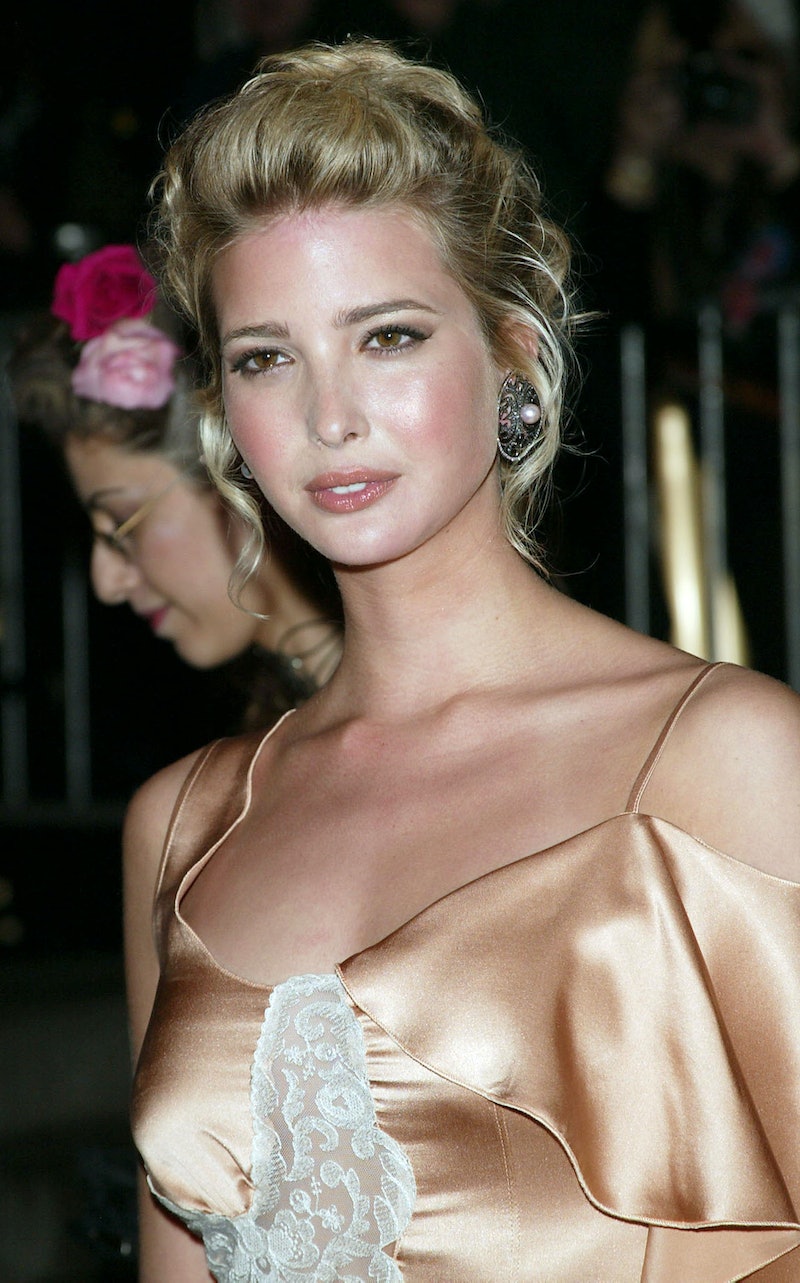 Ivanka Trump is one of the most powerful women in the world. She's a senior advisor to her father in the White House, a job that — though fairly ambiguous — she's used to both push legislation and represent the United States abroad. Years ago she probably never dreamed that she'd be working in the White House, but 36 years of living in the spotlight must have prepared her for the scrutiny. Photos of a young Ivanka Trump reveal what her life was like before she entered the political arena.

Ivanka was born in 1981 in New York City. Her mother, Ivana Trump, is a Czech-American model who split with her husband when her daughter was 10 years old. Ivanka spent most of her childhood years in the city, though she also did a stint at a Connecticut boarding school, and then obtained a degree in economics from the University of Pennsylvania. She modeled on and off throughout adolescence.

She's taken on a diverse range of jobs as an adult. From 2005 to 2017 she worked at The Trump Organization as an executive vice-president of Development & Acquisitions, spearheading major real-estate projects for the company. (She resigned to join the White House.) She's worked on her own jewelry and fashion lines for over a decade. And she's also authored two books, 2009's The Trump Card: Playing to Win in Work and Life and 2017's Women Who Work: Rewriting the Rules for Success.

Now, of course, she's working in her White House office. But it was a long road to get there. Here are photos from her youth that depict the journey.

An Early Appearance In Elle

Ivanka appeared in a 1996 edition of Elle when she was just 14 years old. A 2010 "flashback" feature in the magazine included Ivanka in it, and there was one memorable line from that interview. Referring to the possibility of a sleepover with Chelsea Clinton, she said, "I wouldn't mind having her over. If her dad would let her."

According to Getty, Ivanka was 23 here when she attended a benefit for The New York Pops, an orchestra that specializes in popular music, at Carnegie Hall in 2005.

Ivanka shared this throwback photo on her Instagram in 2012. That's one well-dressed toddler.

Ivanka was 14 years old here, according to her Instagram caption.

This is Choppy, the dog Ivanka had as a child. "Not sure which is better," she wrote on Instagram when sharing the photo, "the overalls or my #TopKnot!"

Ivanka attended a premiere for the HBO show Born Rich, along with Samuel Irving Newhouse IV and Jamie Johnson, according to Getty. She was 21.

This photo shows Ivana and Ivanka enjoying The Trump Rink in Central Park, according to Instagram.

Batting With Her Brother

Here Ivanka's with her little brother Eric, who is about two years younger than her.

That Lace Collar, Though

Anyone else getting Samantha, the American girl doll vibes?

Tiffany and Ivanka are Trump's only daughters.

Dancing In "The Nutcracker"

Ivanka performed in "The Nutcracker" at New York's Lincoln Center with the School of American Ballet. She was about 10 years old at the time, according to her Instagram caption. It's impossible to know for sure from this photo, but it does look like she's playing Clara, the ballet's female lead.

Ivanka and Ivana posed here at Mar-a-Lago in 1986.

Ivanka wrote on Instagram that this photo was taken "circa 1985."

Ivanka was 22 here when she attended the 2004 Met Gala in New York City. Her father and Melania were also at the event that night — in fact, it's when Trump proposed to Melania.

It's unclear how old Ivanka was here, but she can't have been much more than a toddler.

"Found while packing: How amazing is this picture of me and my mom?!" Ivanka wrote on Instagram. "She looks stunning!"

Ivanka's life has gone through an overhaul in the past few years. It's possible that she looks back longingly on the lower-stakes scrutiny of being a real estate mogul's daughter, as opposed to the scrutiny of being one of the top players in the United States government. But her famous discretion may prevent us from ever really knowing how she feels about the change.