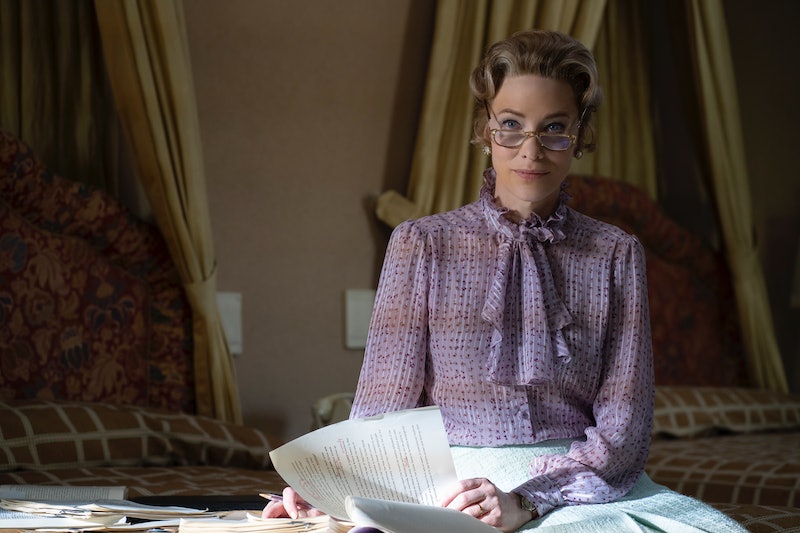 A lawyer, a housewife, and a proud Republican with a talent for grassroots organizing, Phyllis Schlafly left an indelible mark on conservative politics in America. As the star of FX on Hulu's miniseries Mrs. America, we get a fascinating look into the women’s liberation movement of the 1970s through the side of its opposition — where Phyllis Schlafly's beliefs were a key part of the political battle.

Schlafly, played by Cate Blanchett in the series, was a self-described anti-feminist who believed that women belonged in the home. Her signature cause was Stop ERA, a campaign that mobilized Mormon, Catholic, and Evangelical women to protest the Equal Rights Amendment in their respective states. She and her supporters argued that the ERA would threaten gender-specific benefits, making women eligible for the draft, unable to collect "dependent wife" social security benefits, and more.

The mother of six children, Schlafly insisted she was a housewife first, and often referred to politics as a “hobby.” But her influence in the early days of grassroots conservatism should not be underestimated. She founded the conservative organization Eagle Forum, put out regular newsletters, and pushed the party further right. Her 1964 book, A Choice Not an Echo, sold 3 million copies and quickly became a manifesto for conservative Republicans. While her first passion was anti-communist foreign policy, she dedicated herself to fighting the feminist agenda until her death in 2016. Before Schlafly and Stop ERA became a major part of the national conversation, the Republican Party was relatively liberal on women’s issues, according to Alternet. “The party platform supported the ERA, and Republican first lady Betty Ford supported reproductive rights.” While the Stop ERA campaign remains a huge part of her legacy, it was only the beginning of her grassroots organizing. If you’re wondering exactly where the real life Schlafly stood on issues like feminism, reproductive rights and even our current president, here's a breakdown.

The Equal Rights Amendment would guarantee equal legal rights for all American citizens regardless of sex (it has still not been ratified by all 50 states). It seeks to end the legal distinctions between men and women in terms of divorce, property, employment, and other matters. In her 1973 campaign, Stop ERA, Schlafly argued that passing such an amendment would lead to abortions, women being forcibly drafted, gay marriage, and major cuts in child support and alimony.

In 2002, Schlafly told the Washington Post that “Roe v. Wade was the worst decision in the history of the U.S. Supreme Court and is responsible for the killing of millions of unborn babies." She was ardently anti-choice for the duration of her career and took great measures to ensure the Republican party used anti-choice rhetoric in its platform.

Schlafly believed that “traditional marriage” between a man and a woman is essential to a stable society, according to one of her newsletters on the Eagle Forum. Throughout her life she openly opposed same-sex marriage and civil unions.

“The liberals want us to believe that climate change is... caused by gases expelled when humans burn so-called fossil fuels," Schlafly wrote in the Eagle Forum in 2011. Instead, she argued — against the hard science that says otherwise — that climate change was due to normal factors such as “winds, ocean currents, and sun activity.”

At 91, Phyllis Schlafly proudly endorsed Donald Trump at a 2016 rally in St. Louis. “I think he has the courage and the energy — you know you have to have energy for that job — in order to bring some changes. To do what the grassroots want him to do, because this is a grassroots uprising,” Schlafly said in a speech. “We’ve been following the losers for so long — now we’ve got a guy who’s going to lead us to victory.”