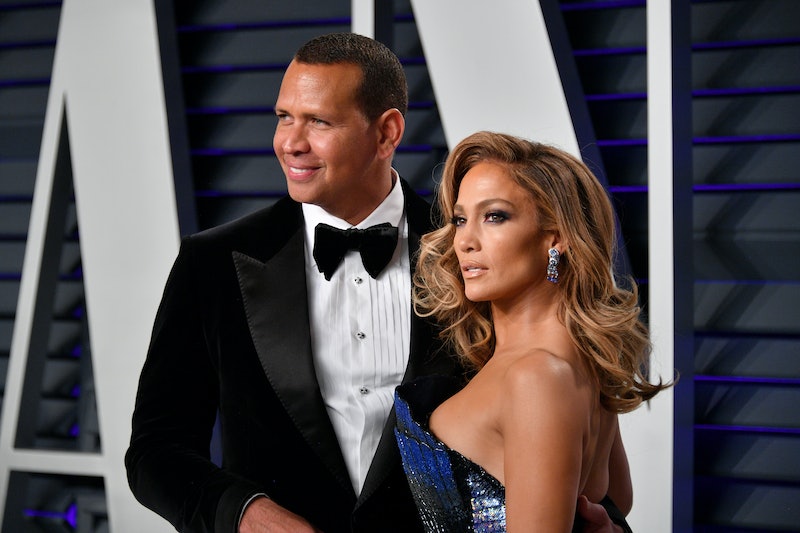 Jenny from the Block has a MASSIVE rock. Hollywood power couple Jennifer Lopez and Alex Rodriguez got engaged over the weekend, with the celebrity duo announcing the thrilling news on their social media feeds. Jennifer Lopez shared a photo of her engagement ring, which is as gigantic as it is stunning. You really can't blame the ultra glamorous singer, actor, fashion designer, and mother of two for wanting to show off the ring and to celebrate her future with the former New York Yankee player.

The romantic image revealing the engagement and the ring, which was posted on each of their individual Instagrams, featured Lopez's manicured hand reaching for Rodriquez's hand. The sun was setting in the background and a soft, subtle orange glow illuminated the ring. Lopez's crisp, white, and square-shaped nails were classic, chic, and didn't draw attention away from the rock that she's got, to paraphrase her smash hit single "Jenny from the Block." It's a lovely image that could actually double as a jewelry advertisement.

Lopez's engagement ring is a rectangular emerald cut. The shape, along with the size, is what makes it so supremely unique. The stone itself looks bigger than her knuckle and you can't really see the band from this vantage point. Still, that's some seriously statement bling.

Lopez and Rodriguez just gave new meaning to the term "Instagram Official." While additional details regarding the ring have yet to be revealed, Entertainment Tonight spoke to jewelry expert Kathryn Money of Brilliant Earth, who estimated that Lopez's ring is worth at over a million dollars.

ELLE also spoke to Andrew Fox of SuperJeweler.com, who also speculated that Lopez's emerald cut diamond is likely "between 11 carats and 15 carats." Ira Weissman of Diamond Pro suggested to ELLE that the ring could be worth as much as $5 million.

Bustle reached out to Lopez's reps for further information about that truly epic engagement bauble.

Whatever the case, Lopez's ring is a fabulous conversation starter. Since J. Lo is a fashion icon, her devoted fans are likely already thinking about what her wedding dress will look like. But it's perfectly acceptable to continue to gawk at her newest piece of jewelry and what it represents.

And that's exactly what followers did in the comments of her Instagram post. Amid a flood of "congratulations" comments, one user enthused, "OMG the RING," which was a pretty common reaction. That's because it is breathtaking and unforgettable. Another user stated, "Best ring ever!," since it's that kind of a dramatic rock. Lastly, this follower summed it up perfectly: "What a gorgeous ring for a gorgeous woman."

Congratulations to Lopez and Rodriguez on their engagement. Now about that wedding dress…