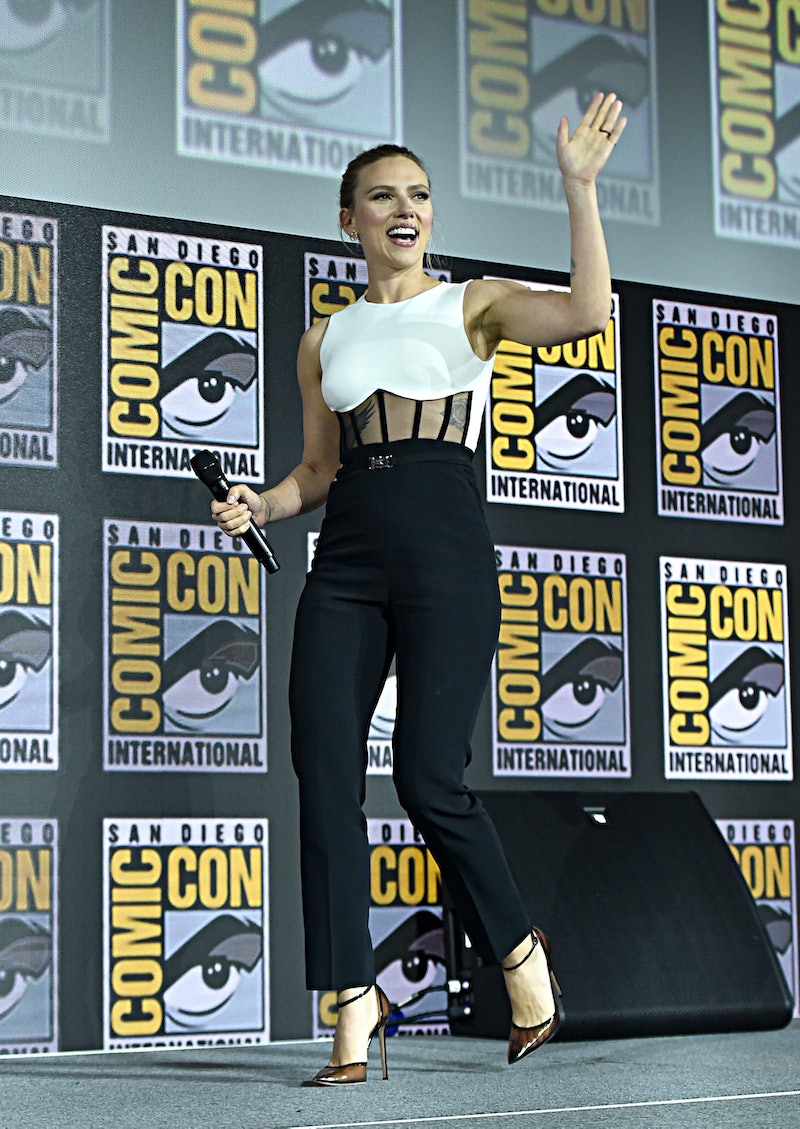 That's some rock. Actor Scarlett Johansson showed off her engagement ring while appearing at the 2019 Comic-Con in San Diego over the weekend. Johansson and fiance Colin Jost have been engaged for two months, having announced their plans to wed back in May. But the actor has only just shown the ring to fans — and it was so worth the wait.

Saturday Night Live star Jost gave Johansson a statement ring that basically takes up half of her finger. It's pretty much unlike any other engagement ring you've ever seen. It's a big and beautiful symbol of the couple's love, and fans won't be able to stop looking at photos of this utterly massive piece of jewelry.

At Comic-Con, Johansson wore her blonde hair swept back into an updo and opted for sparkly eye makeup, dewy skin, and a glossed, pinky nude lip. She wore a David Koma ensemble consisting of a white crop top that was attached to her black pants. She finished off her OOTD with a pair of strappy, pointed heels and round, gold earrings.

However, it was Johansson's engagement ring that absolutely stole the show. She wore it alongside a simple and thin gold band on her pinky finger. While one might think it's best to let a rock like that stand on its own and not compete with any other rings, Johansson's styling was actually a lovely and unexpected move. The placement of her rings was all about balance.

There it is in all of its epic glory. The fact that Johansson was cradling a microphone during her interview and appearance certainly called additional attention to her ring. It boasts a pear-shaped yellow diamond that is affixed to a black band, per PEOPLE. The pear shape is actually an incredibly popular gem style among celebrities and brides these days, according to The Knot. So while Johansson's ring is right on trend, it also stands out due to its size and its shade.

The jewelry site The Adventurine speculated that the ring is a whopping 11 carats and that the design could very well be the work of James de Givenchy, the nephew of Hubert de Givenchy.

Bustle reached out to Johansson's reps for further details about the ring.

Here's another look at Johansson's gorgeous ring. The long stone reaches her knuckle and it's slightly perched off to the side, making it as unique as it is large. Who needs to wear a stack of bangles on the wrist when you have a ring such as this? It's that good.

Johansson and Jost have been dating since 2017. The marriage will be the third for the actor, who was previously wed to fellow actor Ryan Reynolds and writer and art dealer Romain Dauriac, with whom she shares daughter Rose Dorothy, 5. It will be the first marriage for Jost. The pair has not announced a wedding date as of press time.

It's perfectly acceptable to gawk at Johansson's ring. It's easily one of the memorable accessories that the stylish star has ever, well, rocked.