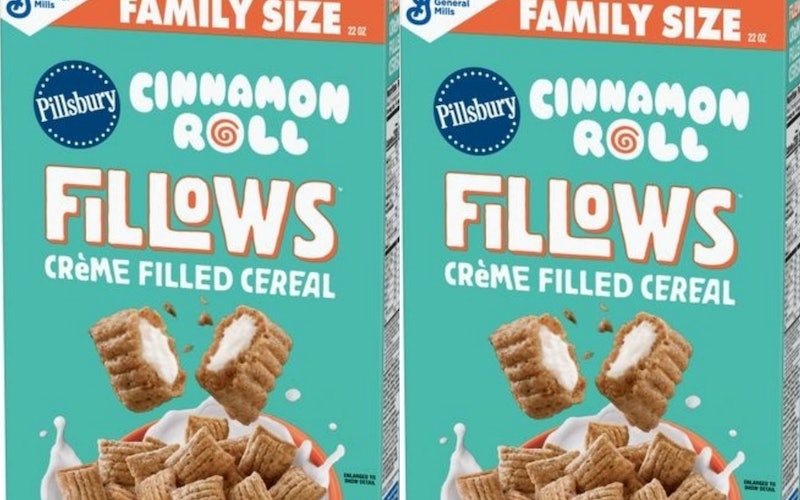 Fans of dessert for breakfast — but not actual dessert, breakfast disguised as dessert — listen up. As reported by the popular "junk food news" Instagram account Candy Hunting, Fillows cereal is about to hit shelves in two very sweet flavors. Reportedly, Pillsbury Cinnamon Roll Fillows cereal and Hershey's Cookies 'n' Creme Fillows cereal will both be available next week at Walmart.

If you're wondering what Fillows even are, they're a cereal that looks like filled pillows. Get it? The outside is crunchy and looks like Puffins cereal and inside is a flavored filling. In the case of the Cinnamon Rolls flavor, one can assume the outside tastes like cinnamon and the creme filling inside mimics the frosting on a cinnamon roll. As for the Cookies 'n' Creme version, the outside must be chocolate-flavored and the inside, obviously, is the cream — I mean, creme.

While Candy Hunting says the cereals will be at Walmart next week, Best Products reports that a General Mills rep said the cereals are currently available at in select grocery stores (the site doesn't specific which ones) and will be made more widely available in the fall. According to the Indianapolis Star, boxes of Fillows will be available in 1,700 Walmarts in 37 metro areas. The site also reports the family-size boxes will cost $3.98 each.

If Fillows sound familiar, it's probably because a version of them already existed. In the fall of 2018, the websites Snack Cellar and The Impulsive Buy both shared posts about the Cookies 'n' Creme flavor of Fillows, which came in a plastic pouch and was marketed as a "snackable cereal." Snack Cellar described the cereal/snack as follows:

The chocolate cereal pieces are closer to the taste of Cocoa Puffs than Oreo cookies, though maybe a bit more muted in flavor. The filling provides peeks of sweetness, but is too easily lost against the chocolate pieces. The texture is a lot more dense and has a much stiffer crunch compared to a similar cereal, Kellogg’s Krave, but I think it works for the snack concept.

There is also a cereal called Fillows as part of Nestlé's NesPlus line, which is available in India. These Multigrain Fillows come in Strawberry-Burst and Choco-Burst. It seems that the shared use of the name could be due to Nestlé and General Mills' joint venture, Cereal Partners Worldwide.

In addition to the new Fillows, the Candy Hunting Instagram account (which is updated very frequently) has shared plenty of other recent cereal additions and revivals. On May 12, they reported that Chocolate Peanut Butter Pops are back after being removed from stores for years. On May 11 came the news that Peanut Butter Chex are supposedly going to soon hit shelves. On May 2, they shared that Toy Story 4 cereal was available.

Basically, if you're into sweet treats and surprising new flavors of everything from cereal to chips to coffee, Candy Hunting will have updates on it. And if you're particularly into the idea of Fillows cereal, start checking Walmart — and possibly other supermarkets — next week.