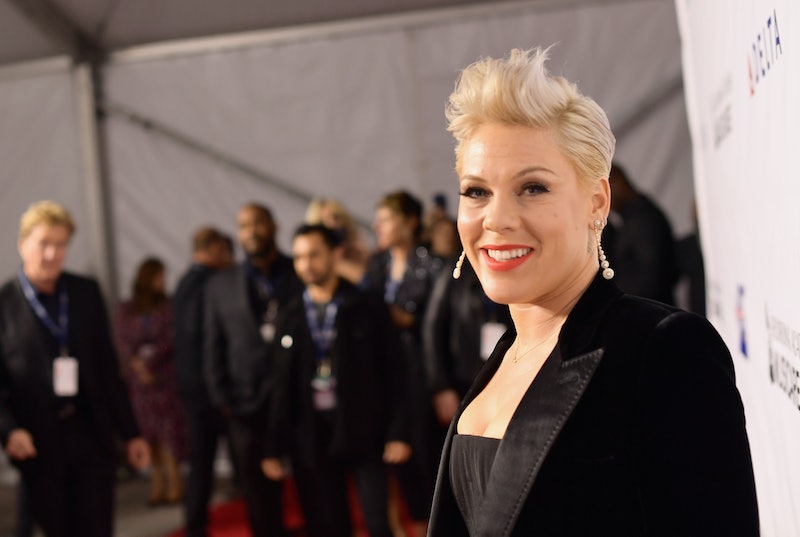 Celebrities deal with parent-shaming all the time, but Pink's response to criticism of her recent Instagram post shows she's not here for judgment of her kids' behavior. The "What About Us" singer came under fire on Instagram on July 14 for a photo of her kids running through a Holocaust memorial in Berlin. The photo of her two kids, 8-year-old Willow and 2-year-old Jameson, was taken at the Berlin Holocaust Memorial, also known as the Memorial to the Murdered Jews of Europe. Pink was in Berlin for the world tour for her seventh album Beautiful Trauma.

Some people thought the children's running was disrespectful to the memorial's serious subject matter. According to CNN, one commenter wrote that "this place is definitely not a hide and seek place." Another, as reported by the BBC, felt that "the location should be treated with high respect."

Pink was not fazed by the backlash, however. Her caption for the post read,

"Berlin, I love you. #holocaustmemorial #panamarestaurant #cocktailclasses #history #herstory #worldtour and for all of the comments; these two children are in actuality Jewish, as am I and the entirety of my mothers family. The very person who constructed this believed in children being children, and to me this is a celebration of life after death. Please keep your hatred and judgment to yourselves."

She makes a good point: The memorial's architect, Peter Eisenman, has been vocal about he thinks visitors should experience it. In a 2017 interview with the BBC about acceptable behavior at a memorial, Eisenman explained, "People have been jumping around on those pillars forever. They've been sunbathing, they've been having lunch there and I think that's fine."

Eisenman also separated the memorial from places like concentration camps, where actual deaths occurred. "There are no dead people under my memorial," he told the BBC. "My idea was to allow as many people of different generations, in their own ways, to deal or not to deal with being in that place. And if they want to lark around I think that's fine."

If the architect of the memorial doesn't have a problem with how children are experiencing it, parents like Pink shouldn't be shamed for allowing their kids to behave like this. And even if you disagree with her choices for her kids, Pink believes that what she calls the "parenting police" can keep their opinions to themselves — because, of course, she's had to face accusations about her parenting skills before.

In a post just five days before her Berlin adventures, Pink shared a photo of Willow running through a sprinkler. She has turned off the comments on the post, and wrote a caption that clearly sends her message:

"Here’s a picture of my child running through water. It wasn’t even filtered. What a waste of water. And no helmet? I hope she had sunscreen. If she slips and falls she may be traumatized for life. And her mother wasn’t even there. I was..... gasp.... working!!!! In another country! 🤘🏽👎🖕#instagramisfun #f*cktheparentingpolice #ifyoufeellikeunfollowingpleasegoddoitquickly #opinionsarelikeassholes #somanyassholes"

Pink's new attitude comes after she revealed on The Ellen Show in April that she stopped posting about her kids on social media because of the parent-shaming she experiences.

"I understand people saying, 'You need to be more careful, because you are in the public eye, and you should've thought of that,'" she told Ellen DeGeneres. "And they're right. But there's a nice way to say that. There's a kind way to be online. And I'm open to kindness."

Pink is right: There is a way to express concern about kids' behavior or safety, but doing it anonymously and rudely in someone's Instagram comments is not it.