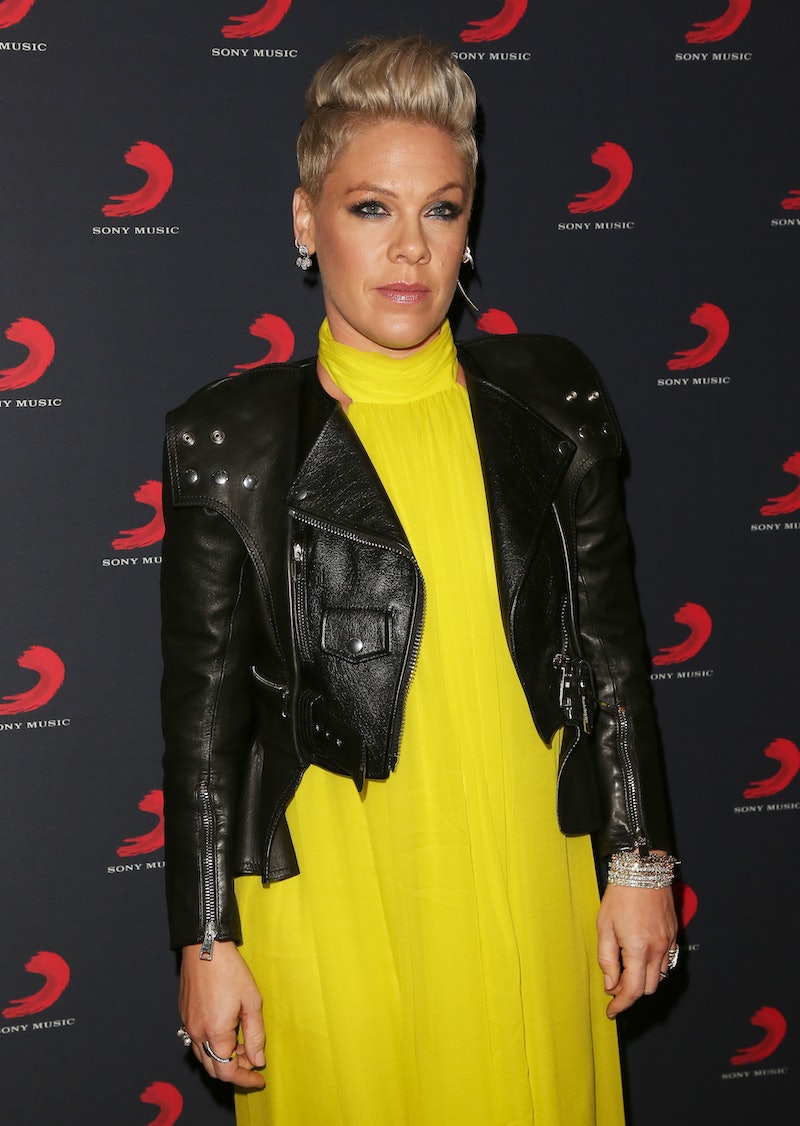 In a brave interview with USA Today published on April 29, Pink revealed she's had several miscarriages. The conversation came about while discussing the 39-year-old's new album, Hurts 2B Human, that dropped on April 26. Regarding one of her latest tracks, "Happy," Pink explained that the lyrics detail her experiences with not only suffering multiple miscarriages, including one at the young age of 17.

If you haven't heard the song, Pink sings at the beginning, "Since I was 17, I've always hated my body / and it feels like my body's hated me." Those words directly correlate with exactly what she was feeling at that time of her life. She told USA Today,

"The reason I said [that] is because I've always had this very tomboy, very strong gymnast body, but actually at 17 I had a miscarriage. And I was going to have that child."

The "Walk Me Home" musician then explained exactly why having a miscarriage can understandably affect some women so deeply, no matter the age. As she stated,

"But when that happens to a woman or a young girl, you feel like your body hates you and like your body is broken, and it's not doing what it's supposed to do. I've had several miscarriages since, so I think it's important to talk about what you're ashamed of, who you really are and the painful [expletive]. I've always written that way."

Plenty of people who have had a miscarriage prefer not to openly discuss their experience and that's OK. However anyone copes with such a difficult issue is completely up to them. But, for Pink, she prefers to have a conversation about it because not only is that just who she is, but expressing herself is therapeutic for the singer.

Actually, Pink didn't go to therapy until she was 22, five years after she had her first miscarriage. The singer told USA Today that her best friend and former assistant, Laura Wilson, pushed her to try it and Pink's been going ever since. She said about talking with a professional,

"I believe in self-confrontation and just getting things out. What I love about therapy is that they'll tell you what your blind spots are. Although that's uncomfortable and painful, it gives you something to work with."

Therapy isn't for everyone, but the sessions are exactly what Pink needs. Plus, the artist thinks she's built to open up about uneasy things that many aren't comfortable with saying out loud. She credits her "really healthy sense of humor" for being able to deal with whatever problems she's facing. "I'm extremely self-deprecating, and when [expletive] goes bad — which in any life is inevitable — you've just got to find the funny," she said, before adding, "It's because I can laugh that I can cry so hard."

This isn't the first time Pink has shined a light on the importance of therapy in her life. Not only has she battled both depression and anxiety, but she and her husband, Carey Hart, have also gone to couples counseling for pretty much their entire relationship.

During an April 25 Today show appearance, she told Carson Daly, "I think talking about [mental health] is the most important thing. I'm hopeful that the taboo of it is all going away because more and more people are talking about it."

Pink's honesty is truly powerful. Hopefully, her vulnerability will inspire and make other women comfortable enough to discuss their own experiences. The fact that she's been so open about her miscarriages allows for other women to relate to her and realize that they aren't alone.