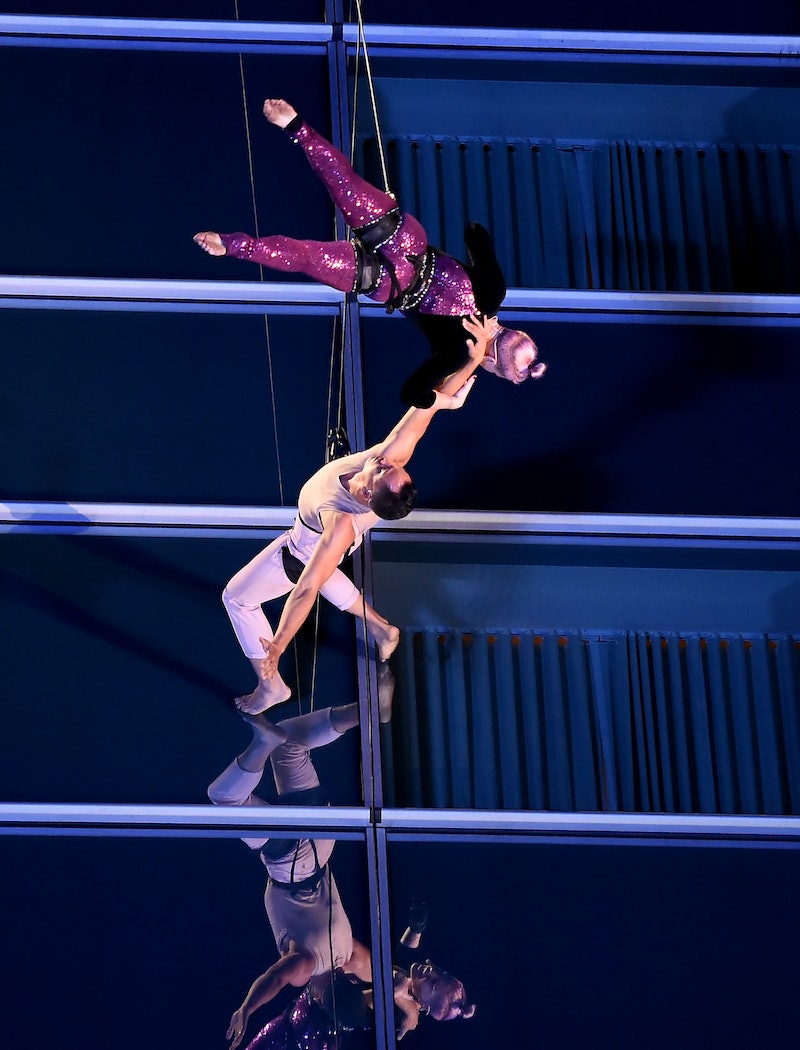 After a slow start to the American Music Awards — Pink and Kelly Clarkson made a vocally impressive but otherwise unremarkable tribute performance to first responders — Pink returned to the AMAs to do what Pink does best: Fly through the air while still managing to belt out impossibly perfect verses. And this time, she took it to a new level. At the 2017 AMAs, Pink performed from the side of a building while flipping through the air in a harness along with trapeze artists, because of course she did.

The wild performance of her new hit "Beautiful Trauma" was impeccably choreographed and amazingly athletic, and Pink didn't miss a note. As a crowd of onlookers, including host Tracee Ellis Ross, watched from below, Pink showed up in a big way, as she's always been known to do. Her moves were graceful, precise and deliberate. She knew exactly what she was doing.

It's hardly the first time Pink has showed off her athletic ability — she's developed a kind of second home in the air, and she lives up to her own sky-high standards with each new performance. At the 2016 Billboard Music Awards, the star belted out notes to her hit "Just Like Fire" while suspended in the air, again delivering a seamless performance even as flames danced just behind her.

This habit goes back years — viewers were equally stunned at the 2009 Video Music Awards when the singer pulled similar stunts performing "Sober." She also has a lengthy history of putting on acrobatic show on tour. Pink has always had a strong, powerful physique and has been unafraid to share that. She touched on the subject in a speech she gave earlier this year at the MTV Video Music Awards.

"When people make fun of me, that’s what they use," she said she told her daughter when her daughter was concerned with "looking like a boy." "They say I look like a boy or I’m too masculine or I have too many opinions, my body is too strong."

Pink made it clear that her body and her strength are not things she's ashamed of or things that she would ever want to change. "And I said to [my daughter], 'Do you see me growing my hair?' She said, 'No, mama,'" the star recollected in her speech as her daughter looked on in the audience. "I said, 'Do you see me changing my body?' 'No, mama.' 'Do you see me changing the way I present myself to the world?' 'No, mama.' 'Do you see me selling out arenas all over the world?' 'Yes, Mama.' 'OK! So, baby girl. We don’t change. We take the gravel and the shell and we make a pearl. And we help other people to change so they can see more kinds of beauty.'"

This body positivity isn't new, either — Pink's always been outspoken about body image and loving herself. "I thought I'd lose [the baby weight] a lot easier," she told the Mirror in 2013. "I'm totally OK with it, though, and definitely don't spend time thinking about it. It doesn't stop me enjoying my life. I also have the opposite of body dysmorphia where when I'm a bit chubby, I think I look kind of great. I'm like, 'Damn, you look good!'"

Pink's performances have become iconic. They're outrageous, over-the-top, beautiful to look at, and just downright physically difficult. She's got not only a voice that can chill you to the bone, but she's never been known to simply stand behind a microphone. When you sit down to watch Pink perform, you sit down to watch a show, and if we're lucky, there will be plenty more spectacles from her in the future.