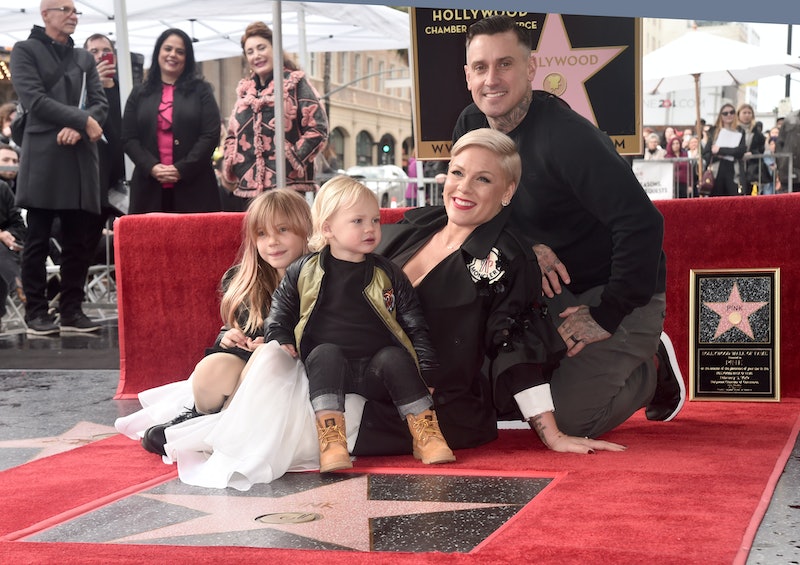 Here's proof Willow Sage Hart is the most supportive daughter ever — and also just really stinking cute. Pink's daughter reacted to her Hollywood Walk of Fame star in the most perfect and hilarious way. While appearing on The Ellen DeGeneres Show the same day after receiving her star on Feb. 5, the singer opened up about how Willow celebrated the major honor.

After discussing with Ellen DeGeneres how she hates being complimented, Pink admitted that both her husband, Carey Hart, and her 7-year-old daughter gave her some lovely presents prior to her star ceremony. She said,

"He brought in flowers yesterday and Willow wrote me a note that said, 'Mama, this is a big deal. And I’m glad it’s you and not Justin Beaver.' I was like, that is so random — how does she even know … I don't know, It was cute. I was like, 'This must be a big deal.'"

DeGeneres confirmed with Pink that Willow actually wrote "Justin Beaver" rather than his real name, "Justin Bieber." The daytime talk show host then joked, "She's, like, the only little girl who doesn't know how to pronounce his name."

Seeing as Willow is only 7 and wasn't even born when Bieber first became wildly famous in 2009 (she was born in 2011), it's understandable that she got the singer's name confused. There's also a good chance she doesn't even listen to his music, especially since she is so young. Either way, Willow's error makes for the most adorable mix-up.

Plus, messing up Bieber's name is common. Just ask Dwight Schrute from The Office:

Back to Pink's star on the Hollywood Walk of Fame, her entire family, including Hart, Willow, and her 2-year-old son, Jameson Moon Hart, were all in attendance.

While accepting her star, Pink gave the sweetest speech praising her family. She said, "My whole family is here, and that makes it real. My friends and my fans, thank you for all of it. You guys make it matter. It's so good to see you, thank you for coming."

The "What About Us" singer continued gushing,

"And my husband, he's so cute. He's my muse and if he didn't piss me off all the time I'd have not much to say. Thank you. I literally would not be standing here if it weren't for you, so never change. And my children, Willow Sage and Jameson Moon, you guys are my stars and I would never shine without you. Ever, ever, ever."

As for why Pink doesn't like compliments (she has received many since getting her star), she told DeGeneres she gets embarrassed and somewhat uncomfortable. "It's not how I learn," the singer said. "Positive reinforcement doesn't work on me."

That said, Pink is truly grateful for everything in her life, including her star. "I recognized so many people out there," she said about people at her ceremony. "All from the concerts, all over the years. It's meaningful. It is meaningful."

There's no denying the event was truly "meaningful," especially thanks to Willow's congratulatory note that showed Pink just how big of a deal getting a star on the Hollywood Walk of Fame really is.