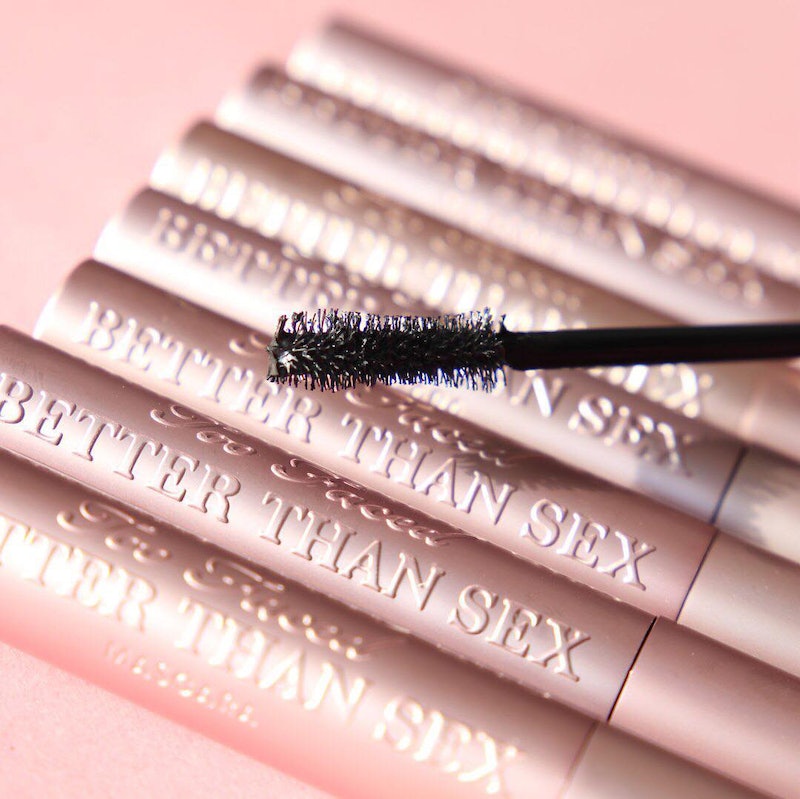 Pinterest is full of beauty looks and fashion finds, but it's also a way to see what the upcoming trends will be and what products users are loving. As it turns out, people are all about lashes. Pinterest's most pinned mascara is Too Faced Better Than Sex. But there's a drugstore alternative that the internet is raving, and it could just come for that Pinterest crown.

L'Oreal's Voluminous Lash Paradise has been popping up online since it was released back in May. It's part of the Voluminous family, L'Oreal's classic line of mascaras that is home to the always popular, makeup artist favorite, Carbon Black. Now, though, it's the new, adorably pink version of Voluminous that's making waves.

While Better Than Sex is Pinterest's most pinned mascara according to Allure, L'Oreal's Lash Paradise appears to be a near perfect dupe for the luxe beauty product. Ringing in at only $5 to $10, depending on the retailer, Lash Paradise is a fraction of the cost of Too Faced's iconic mascara which costs fans $25. Essentially, L'Oreal's mascara is less than half the cost of Too Faced, and according to the internet, it's just as good.

In fact, Lash Paradise is so good that YouTube beauty gurus have been raving about it for some time. From videos comparing it directly to Better Than Sex to standalone reviews, if it hadn't already been a hit, the sheer number of gurus singing its praises during its release made it so.

During the summer, beauty guru and influencer Jaclyn Hill took to her Snapchat account to sing the praises of the affordable, drugstore mascara. In the videos, she even puts the mascara on with no false lashes, and the results were definitely dramatic.

Hill certainly isn't alone in her love of the mascara, though. Other beauty gurus have taken to their YouTube channels to share their love of this affordable alternative.

Then, there's Tati Westbrook's review of the mascara. While she doesn't do a direct comparison to the Too Faced Better Than Sex, she does tell her subscribers that it may be her new favorite mascara. If you're a Westbrook subscriber, you know she's continued to use the mascara in her other videos after this review.

Dacey Cash also tested out both mascara, but chose to use their waterproof version. She applied multiple coats to her top lashes, and used the products on her bottom lashes as well. For her, L'Oreal was also the winner for its ability to make her lashes flare.

Despite the dupe, however, Better Than Sex is still the reigning champion of mascaras on Pinterest. Whether it's its charming and slightly dirty name, it's ultra sleek pink packaging, or the hefty weight of the tube (like it's really luxe, guys), people still seem to love the volumizing and lengthening product. If you feel like splurging, there's clearly a ton of people who love this iconic product from Too Faced.

As for the L'Oreal mascara, it's not just beauty gurus who have made the switch to the affordable product. Beauty fans on Twitter are also loving the alternative.

People are actually calling it "heaven in a tube."

The savings are undeniable.

Some are saying goodbye to their luxury mascaras for good.

Ultimately, your mascara decision is personal. If you swear by Better Than Sex and don't want to leave it behind, you're certainly not alone. After all, it is Pinterest's most pinned mascara despite the dupe. However, if you're looking to save a little cash by trying a new drugstore product, the L'Oreal Voluminous Lash Paradise may be just the ticket.