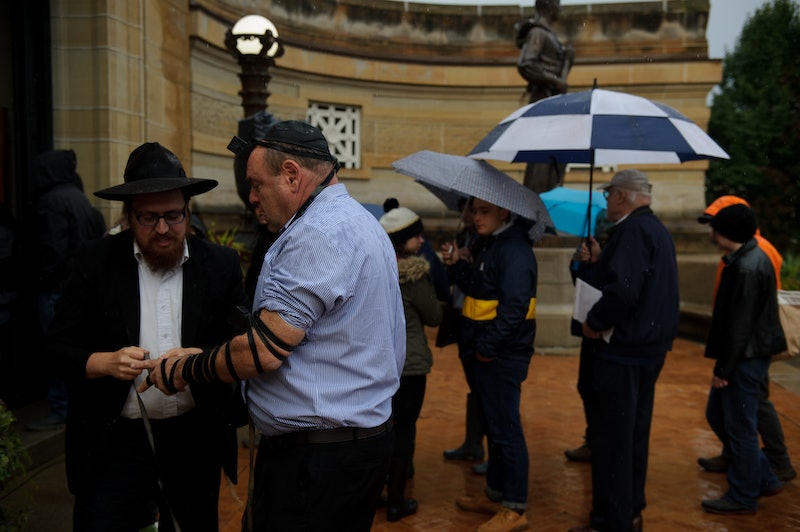 The deadly mass shooting at a Pittsburgh synagogue on Saturday has renewed debate over Trump's failure to more strongly condemn white nationalists. And this isn't the first time. The white supremacist rally in Charlottesville, Virginia last year sparked similar conversation. In response to this weekend's shooting, Pittsburgh Jewish leaders are urging Trump to stop targeting minorities and to denounce white nationalism. Until he does so, they suggest the president will not be welcome in their city.

Nearly a dozen members of the Pittsburgh affiliate of Bend the Arc: A Jewish Partnership for Justice wrote an open letter to Trump after the attack:

For the past three years your words and your policies have emboldened a growing white nationalist movement. You yourself called the murderer evil, but yesterday’s violence is the direct culmination of your influence.

The group then wrote the following in boldface letters: "President Trump, you are not welcome in Pittsburgh until you fully denounce white nationalism."

Bend the Arc describes itself as a group that unites progressive Jewish voices across the nation to "fight for justice for all." The organization's website says tens of thousands of progressive Jews nationwide are members and grouped together in solidarity with all those who are threatened by the Trump agenda.

"Our Jewish community is not the only group you have targeted. You have also deliberately undermined the safety of people of color, Muslims, LGBTQ people, and people with disabilities," the letter continued. "Yesterday’s massacre is not the first act of terror you incited against a minority group in our country. President Trump, you are not welcome in Pittsburgh until you stop targeting and endangering all minorities."

The suspected shooter has been arrested and charged with the deaths of the worshipers at the Tree of Life Synagogue. According to The New York Times, for months before the shooting, the suspect spewed anti-immigrant and anti-Jewish conspiracy theories online. Bend the Arc's letter addressed his hatred and anti-Semitism, calling for the president to change his language and approach toward immigrants.

"The murderer’s last public statement invoked the compassionate work of the Jewish refugee service HIAS at the end of a week in which you spread lies and sowed fear about migrant families in Central America," the group wrote. "He killed Jews in order to undermine the efforts of all those who find shared humanity with immigrants and refugees. President Trump, you are not welcome in Pittsburgh until you cease your assault on immigrants and refugees."

According to The Hill, the shooting at the synagogue is the deadliest anti-Semitic attack in American history. Trump called the shooter a “wacko” deserving of the death penalty before departing for an Illinois rally Saturday night and suggested that if the synagogue had an “armed guard,” the attacked could have been prevented.

The letter finished with a call demanding that the president imbue compassion into his policies.

"While we cannot speak for all Pittsburghers, or even all Jewish Pittsburghers, we know we speak for a diverse and unified group when we say: President Trump, you are not welcome in Pittsburgh until you commit yourself to compassionate, democratic policies that recognize the dignity of all of us."