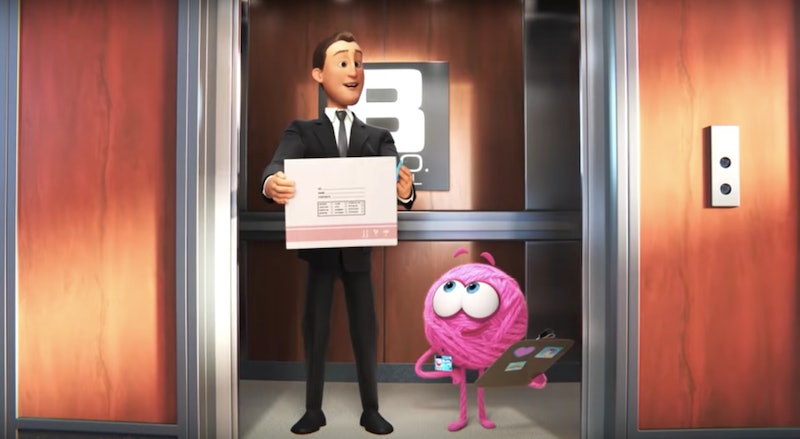 In an unprecedented move for the animation studio, Pixar's new short film Purl speaks to more mature audiences with its incredibly relatable adult themes. In this case, it's a powerful story about toxic masculinity in the workplace. On Monday, Pixar released the nine-minute short which is as recognizable and heartbreaking as it is moving and inspiring. Written and directed by Kristen Lester, Purl is a must-see for anyone in the current workplace and beyond.

The short follows a bubbly, genuine, and enthusiastic ball of pink yarn named Purl who finds herself thrust into a fast-paced start-up called B.R.O. Capital. As a new employee, Purl's excitement is hindered as she almost instantly recognizes how out of place she is at the company. In a sea of suited up, high-energy white men, Purl quickly becomes incredibly isolated. Trying to fit in, she cracks a joke to men around a water cooler only to be met with no laughs and she later pitches an idea at a meeting and gets the feedback, "You're being too soft. We gotta be aggressive."

So, Purl changes her entire demeanor and appearance to fit in. As explained by Pixar's Youtube description, the film asks: "How far is she willing to go to get the acceptance she yearns for, and in the end, is it worth it?"

And so, in a story that many working women can relate to, Purl compromises who she is to become one of the boys. She begins donning a suit like them and changing her round shape to be straighter and flat, tells an inappropriate joke in the office to get laughs, and pitches an aggressive idea that's loved by her male co-workers in a meeting. From water cooler talk to happy hours, she's part of the bunch, until however, a new employee comes along who looks like Purl used to. Once Purl empathizes with her for feeling so isolated, she returns to her authentic self and changes the entire culture of her workplace. The audience later sees Purl running the show and welcoming a new employee to a floor of diverse colleagues of different genders, shapes, colors, and sizes.

Helmed by Lester and produced by Gillian Libbert-Duncan, the SparkShorts initiative is a heartfelt yet poignant way of speaking to prevalent working environments in corporate America. In Pixar's "Meet the Filmmakers" video, Lester explained how Purl was based on her personal experience, in animation nonetheless.

"My first job, I was like the only woman in the room, and so in order to do the thing that I loved, I sort of became one of the guys," the filmmaker revealed. "Then I came to Pixar and I started to work on teams with women for the first time, and that actually made me realize how much of the female aspect of myself I had sort of buried and left behind."

Because the story was so relatable, there was an instant camaraderie between Lester and her team. Producer Libbert-Duncan said in the video, "When Kristen came to me and said, 'This is a story that I want to tell,' I looked at her and I said, 'Oh my gosh, I have lived the exact same thing.'" In what seems to be a true labor of love, a first look at Purl was revealed to audiences last June, as reported by Slash Film. But its themes and messages are still wildly timely and will likely uplift and inspire anyone who watches.