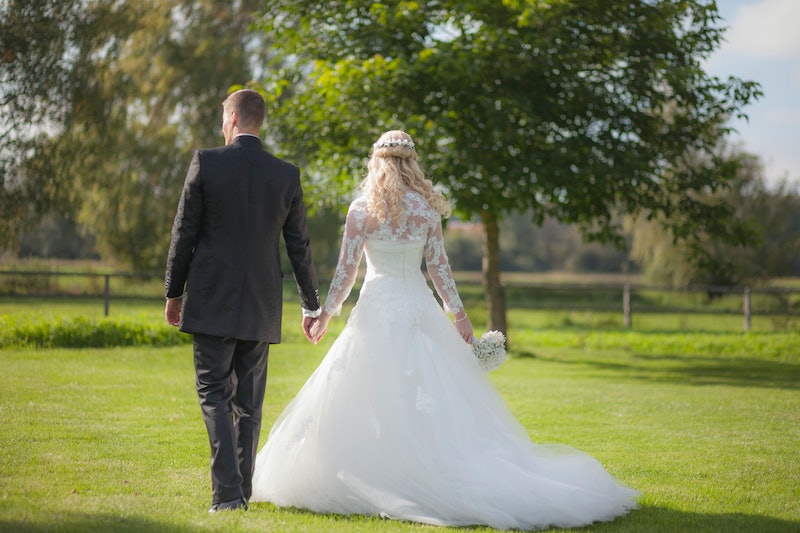 Some southern U.S. plantations, the sites where hundreds of thousands of Black people were enslaved, brutalized, and killed, have since become historical sites where people can learn about slavery. Others have been turned into resorts, bed and breakfasts, or wedding venues. Wedding-planning platforms Pinterest and The Knot Worldwide announced on Dec. 4 that they will no longer promote any wedding content that romanticizes slave plantations, according to a BuzzFeed News exclusive. Representatives for both of the companies told BuzzFeed that they are reworking policies that regulate how vendors on their websites talk about Southern plantation history.

Jade Magnus Ogunnaike, senior campaign director for Color Of Change, the country's largest racial justice organization, tells Bustle the change is the result of a campaign the group led to ensure that the language used to describe plantations doesn't erase the atrocities committed on them. The fact that plantations should not be wedding venues is "something that is firmly understood within Black communities," she says. "We have no happy memories of slavery. We have no happy memories on plantations, and we do not warmly remember pre-Civil War America."

The Knot Worldwide will no longer allow plantation venues to use words such as as “elegant" or “charming" to describe a history that includes slavery. Dhanusha Sivajee, the company's chief marketing officer, told BuzzFeed News, “We want to make sure we’re serving all our couples and that they don’t feel in any way discriminated against."

Pinterest will also restrict plantation wedding content on its website and will also work to ensure that Pinterest posts don't appear in a Google search of "plantation wedding," a spokesperson told BuzzFeed. "Weddings should be a symbol of love and unity. Plantations represent none of those things," the Pinterest spokesperson told BuzzFeed. "We are working to limit the distribution of this content and accounts across our platform, and continue to not accept advertisements for them." Pinterest users may still be able to search for plantation wedding content, but when they do they will see an alert that says some of the content may violate Pinterest's policies, BuzzFeed reported.

The Knot Worldwide and Pinterest both decided to change their policies after receiving letters as part of a Color Of Change's campaign. Ogunnaike tells Bustle that when the group researched wedding websites, they found that the language that plantations used to describe themselves included phrases like "antique 1700s manor."

"They're not saying that this was a space that Black people were beaten and raped and enslaved," she says. "They're framing it as a very romantic and whimsical kind of thing, which for Black people that is not the case."

In order to qualify as a plantation, a farm had to have at least 20 enslaved people, according to the National Center for the Humanities. In 1860, 46,300 plantations existed in the United States.

Ogunnaike says the fact that Americans still find plantations beautiful or romantic is evidence of how the education system fails to truly reveal the horrors of slavery. A 2018 report from The Southern Poverty Law center found that slavery is often mischaracterized and sanitized in U.S. schools; The Atlantic reported that, for one example, middle-schoolers in Charlotte, North Carolina were asked to cite “four reasons why Africans made good slaves.” This kind of misinformation actively erases the harm caused at sites like plantations.

"You would never see a concentration camp being marketed as a wedding venue," Ogunnaike says. "No matter if it was on beautiful green grass and no matter if there were nice statues."

The Knot Worldwide, which also owns WeddingWire, will work with Color Of Change to further develop its policies regulating plantation venues on its sites.

Color Of Change sent similar letters to Zola, Martha Stewart Weddings, and Brides as part of its campaign, BuzzFeed reported. A spokesperson for Brides tells Bustle, "Brides is an inclusive place where everyone can feel celebrated. Content glorifying plantations is not in line with our core values. We have removed these references and are actively working with Color of Change to evolve our guidelines to help ensure all our couples are supported, respected and inspired." A spokesperson for Martha Stewart Weddings tells Bustle, "We thank Color of Change for bringing this valid concern to us. We feature how couples have chosen to wed and celebrate their special day. We will give this careful thought and attention."

Ogunnaike tells Bustle that Zola responded to the target letter, which highlighted specific problematic phrases on its website regarding plantation venues, by purging its site of the phrases; she also says Zola "refused to meet" with Color Of Change to discuss any policy change. Emily Forrest, a communications manager for Zola, told BuzzFeed News about the Color Of Change letter: “After reviewing this complaint we determined it did not violate our non-discrimination policy. While we may not always agree with couples on all of their wedding details, we also respect their right to choose where and how they want to get married.”

Following the publication of the BuzzFeed News exclusive, Zola announced in a statement emailed to Bustle that they have updated their policy. "We re-evaluated all our venues listed on Zola and determined we will not allow vendors to list who are plantations. We recognize that this is a painful issue and have been evaluating on an ongoing basis. We appreciate Color of Change for bringing this issue forward, and will work with them and additional organizations to ensure our policies and guidelines are inclusive and make everyone feel welcome."

The fact that plantations are still marketed as wedding venues at all, despite the violence and dehumanization that took place on them, speaks to the ways the U.S. needs to have "a greater conversation and understanding about what a plantation really is, which was a forced labor camp where Black people were treated deplorably," Ogunnaike says. "We need to have very clear and specific language around plantations and around slavery."